The Naked Truth About Nude Swimming at School

I'd heard of this, but wasn't aware I just missed it (THANK GOD — I was fat and accused of having breasts playing shirts vs. skins basketball), but boys in the U.S. were mostly required to swim totally nude in school pools right through the early '80s.

Why? The tortured explanation seemed to, er, satisfy the coaches who had to keep watch!

Apparently, requiring that boys swim nude when segregated from girls in both public and school swimming pools was very common across the U.S. until about 1980.

I find it surprising that naked swimming in school pools was that widespread, was tolerated in the uptight '50s and is almost never depicted or referred to in movies or books. I also never, ever heard of it when I was in high school myself, just a few years later than the time when it was common ... it's like once they decided to stop it, it was a we-must-never-speak-of-this issue.

WBEZ 91.5 Chicago writes that there was a method to the madness:

The country ... also obsessed with fighting disease and promoting personal hygiene, which in the 1920s, was also associated with “good morals.” Health officials worried that allowing potentially dirty fabrics into public pools could introduce germs, and bacteria-killing pool chlorination had still not been perfected. Plus, at the time, swimming pools had fairly primitive filters that could easily be clogged by fabric fibers from swimsuits, which were made of cotton and wool — yes, wool.So, in an effort to minimize bacteria, keep pool filters from clogging and ensure male swimmers were clean, the American Public Health Association (APHA) recommended the following in their 1926 standards handbook:

If you're not buying the idea that males wearing suits was somehow more bacteria-friendly than women wearing (much larger!) suits, you're not the only one. Many students apparently objected to the embarrassing rule — to no avail.

In fact, once chlorination and filtration became the naked truth, and the American Public (pubic?) Health Association reversed its policy, stating it was fine for boys to cover up, many public schools, including the massive Chicago Public Schools system, ignored the new guidelines:

By the mid-20th century, however, new chlorination science was developed and pool-filtration systems improved. Bathing suits were also being made of different fabrics, like nylon. Pool germs and fabric fibers were no longer a big issue. So the APHA dropped the nude swimming recommendation in 1962.

Parents sued the Menasha, Wisconsin, school board in 1961, trying to do away with the requirement that their sons strip nekkid before taking a dip, but lost. The arguments in the case were that buying suits for the boys would cost $3,000, and that nude swimming promoted "time-saving and the development of good physical education attributed."

Yes, They Made Us Swim Naked — Read

Girls were likely exempted out of pure sexism, a dated view that they had the good stuff and were therefore allowed to risk dying of a dreaded swimsuit-bacterial infection in order to shield their virtue. And their boobies. 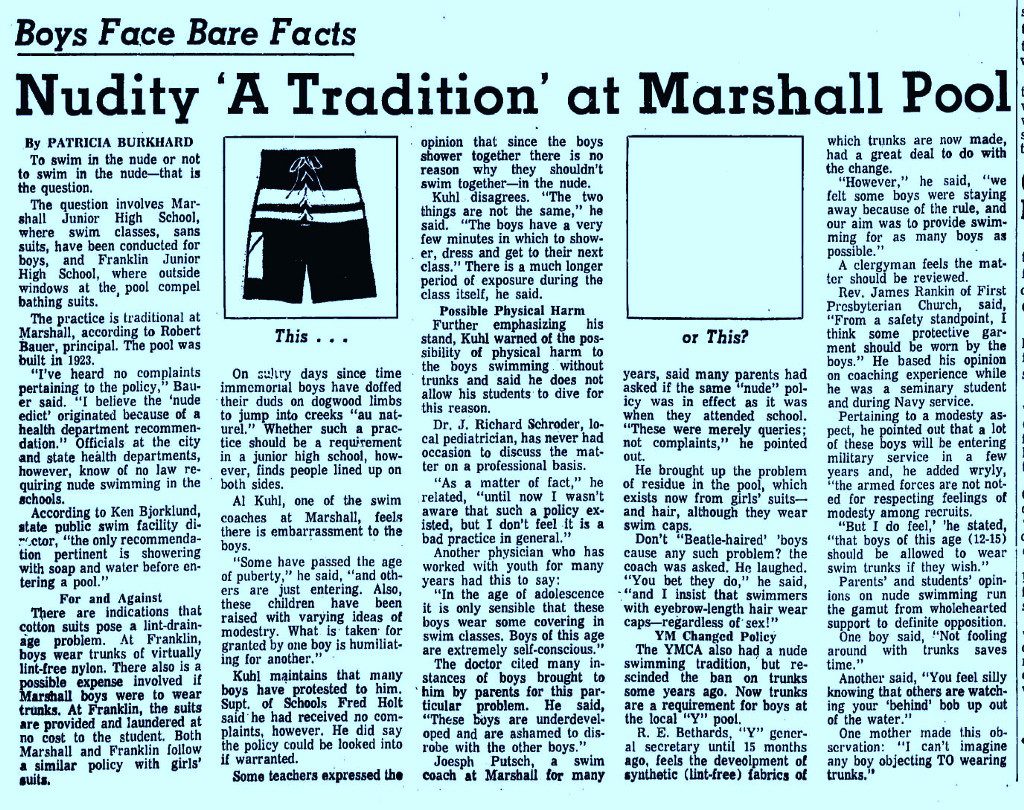 Baring all, circa 1967 (Image via Janesville Daily Gazette)

This is all so nutty, I think WBEZ's got it right in noting:

Almost all of the men I talked to say young people have a hard time believing this ever happened. The men say they’re often asked why they didn’t just protest or demand a better reason from teachers for swimming naked.

As Bill Flanigin wrote for Huffington Post, the practice of nude swimming at school blew his mind in the '70s:

Before our “swimming unit” was to begin, coach went over a few quick swim guidelines: No horseplay, no running around the pool, we would be swimming naked, there would be no...wait, what? We would be swimming naked? What kind of a sick joke was this, man? He went on to explain that because our swimsuits would freeze in the Michigan winter if we took them home, or that they would mildew if we just left them in our lockers, it would be easier if we all just swam completely naked. (Years later it occurred to me that our towels would also get wet, but we still used those!)

I looked around the gym at my fellow classmates, no one looked surprised. I suppose the sophomores, juniors, and seniors had all experienced naked PE swimming before. And, perhaps a lot of the other freshmen had heard about naked swimming from their older brothers because they seemed fine with what there were hearing. I, on the other hand, was having a panic attack. I was the kind of wussy ninth grader that hated even showering after gym class. That was humiliating enough. Imagine, and remember, this skinny, mostly pubic hair-free ninth grader was in a class with high school seniors. Those dudes were basically adult men. They had fully bushed wangs and I was barely out of the peach fuzz stage. Naked swimming? Did the school board know this was happening? Was the community aware of this practice? Take a second and put yourself in my shoes here. Could there be a more frightening scenario on Earth than forced skinny dipping at school against your will? I would literally be living out the “being at school naked” nightmare many of you have experienced.

I went home and told my mom. She didn’t believe me.

As unbelievable as it was, it was. Until it wasn't.

But it took the 1980 federal Title IX gender equality rules to completely kill off the practice of requiring boys to swim nude in many public and school pools.

Imagine trying to argue that nude swimming in public schools would be a good idea today? Well, it was happening less than 40 years ago, so some of the older members of various school boards — feigning shock and horror — would have to admit that ah, yes, they remembered it hell. I mean ... well.