As a baby, he appeared in several (or up to several dozen) films, often uncredited. His first known appearance was in the 1921 short I Do with a pre-famous Harold Lloyd (1893-1971), and his most memorable screen gig was playing Lloyd's character as a baby in Grandma's Boy (1922), the film that established Lloyd as a star. 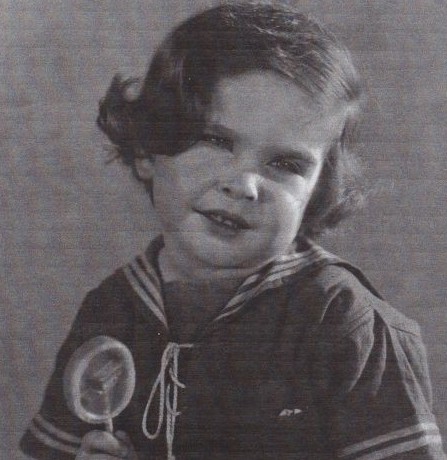 As quoted by writer Howard Mutti-Mewse, Edwards recalled of Lloyd:

Harold and his wife, liked to cuddle me a lot. They became very close to my family; it was actually Harold who noticed my first baby tooth!

In all Edwards is known to have made his mark in 10 films, including two in 1940, years after he mostly retired by age 4.

Back home in Florida, Edwards went on to serve in the Marines receiving the Purple Heart for his service in WWII. He later became a teacher.

The link to the silent screen has faded further still with the passing of Jack C. Edwards yesterday (July 16) aged 97. During his brief flicker in the spotlight, he appeared in a handful of short films at the Hal Roach Studios, followed by a brief stint at MGM; working alongside Earle Williams and Jane Novak in "Jealous Husbands", directed by Maurice Tourneur, as Bobbie in "So This Is Marriage?" (both 1923) starring Eleanor Boardman and Conrad Nagel, and with Jack Pickford in the comedy, "Waking Up the Town" (1925), his final film. He retired aged just four. • Although not in the same category as his contemporary Jackie Coogan, ‘Baby Jackie Edwards’ was just as enduring. His parents were hardly old enough to be married when his older sister, Winifred was born: who was such an angelic infant she won the title, “Tampa’s Most Perfect Baby”. • By the time Winifred was making a name for herself, Jack was doing his best to compete for the limelight too. When Hal Roach required a baby for his comedy short, "I Do" (1921) he hired Jack on the spot. In 1922, he made his most memorable appearance, playing Harold Lloyd as a baby (pictured here as the baby with Harold, Jackie Moran and Mildred Harris), in "Grandma’s Boy" (1922). A huge box-office success, it helped to pioneer feature length comedies and made Harold Lloyd a star. “Harold and his wife, liked to cuddle me a lot. They became very close to my family; it was actually Harold who noticed my first baby tooth!” • Away from Hollywood, the family settled in Florida. Jack graduated High School in 1939, then joined the U.S. Marine Corps, where he saw action in the Pacific during WWII (he received a Purple Heart for being wounded on Okinawa). In his spare time, he taught himself to speak Japanese fluently. He retired after 20 years service and then became a teacher. • Interest in his career surfaced in 2010; “My favourite fan mail was from an 18 year old Polish young lady who signed her letter with “Love and Kisses”; finally after more than 85 years away from the screen, I was getting the ‘star treatment’.” • • #iusedtobeinpictures #haroldlloyd #halroach #mgm #1920s #rip2018 #silentscreen #silentstar #childstar