Liz Smith, whose gossip columns chided and cheered the elites of New York and Hollywood for decades, has died. She was 94.

Smith, the "Grand Dame of Dish," was born in Fort Worth, Texas, married a WWII vet, but divorced him after studying at the University of Texas, where she earned her journalism degree in 1949.

After working as a copy editor and reporter — and landing a gig at Modern Screen thanks to her college pal, actor Zachary Scott (1914-1965) — she became a producer for Mike Wallace (1918-2012), worked behind the scenes on Candid Camera and was the ghostwriter of the "Cholly Knickerbocker" columns for Hearst before becoming entertainment editor for Cosmopolitan and Sports Illustrated. 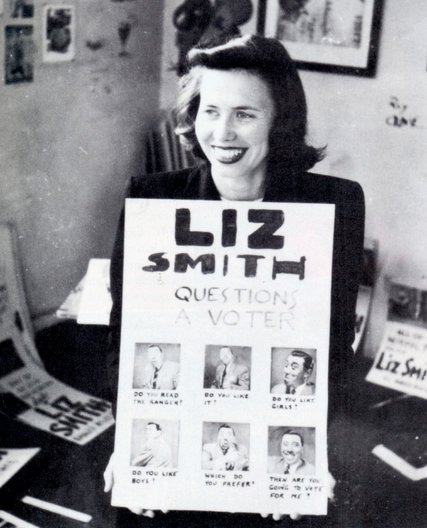 Smith in college, running for office (Image via Liz Smith)

Smith launched her stellar career as a gossip columnist with the February 16, 1976, issue of the New York Daily News. She would eventually work for Newsday and the New York Post, all while being syndicated nationally, her observations considered highly influential by her peers and her rivals alike.

“I was horrified at the way he treated her, and I made the mistake of defending her,” she said. “This is always fatal for your aspirations to be taken seriously as a reporter. But I had no choice. I had to be nice to them for a while to get access to them. I didn’t particularly approve of them, I didn’t like or dislike them. And I met his whole family and they were charming. So I was swept up in the scandal of Ivana wanting a decent settlement from Donald. And I became a featured player in the story, which I came to regret.”

Long the subject of gay rumors, Smith — who counted Holland Taylor (b. 1943) and the late Ann Richards (1933-2006) among her closest friends — acknowledged her bisexuality in her 2000 memoir Natural Blonde, but always avoided being tagged a gay icon.

She may have played apolitical, but she definitely took a stand from time to time. She told THR in 2015 that she'd never speak to Lee Radziwill (b. 1933) again due to a slur the socialite uttered to her privately:

Well, she did something terrible. She was always a close friend of Truman Capote's. But then Capote got embroiled in that ridiculous libel suit with Gore Vidal over his claim that Vidal had been drunkenly kicked out of the White House. Lee is the one who told Capote the story, but when it ended up in court, she threw him to the wolves. All she had to do was tell the truth. But she refused, and Truman lost the lawsuit, which devastated him. During the trial, as a last-ditch effort, he asked me to call her and beg her to testify. And you know, Truman had done everything for her. He even tried to help her start an acting career. But when I called her and said, "Lee, you really must testify for Truman," she said, "Oh, Liz, what do we care; they're just a couple of fags! They're disgusting." I was so stunned, I just hung up. I've never spoken to her since.

She published her final major syndicated column in 2009, but, along with her writer Denis Ferrara, still published a column on wowOwow.com and New York Social Diary.

On July 28, 2017, John Leland profiled Smith for The New York Times in a piece that many thought came off as mournful, almost regretful of her place amidst the gossip firmament. From the article:

“I don’t think my name could sell anything now,” Ms. Smith said in the apartment where she moved after her stroke in January, from her longtime digs above a Tex-Mex restaurant in Murray Hill. She wore a white cable-knit sweater and bright orange lipstick.

“It used to mean — bylines used to mean something in journalism,” she said, her Texas accent still unbowed. But with the internet and social media, she said, “most people have forgotten about so-called powerful people like me; we served our time.”

The Times story on Smith ended ominously, with Smith musing:

“And I could give up and commit suicide or just let events take their place.”