Swain, a veteran of the Disney Main Street Parade and hard-earned ballet lessons, got her start musically via producer Jon St. James (b. circa 1950s), who invited the street-chic fashionista to join his band Q (later SSQ) in 1981. 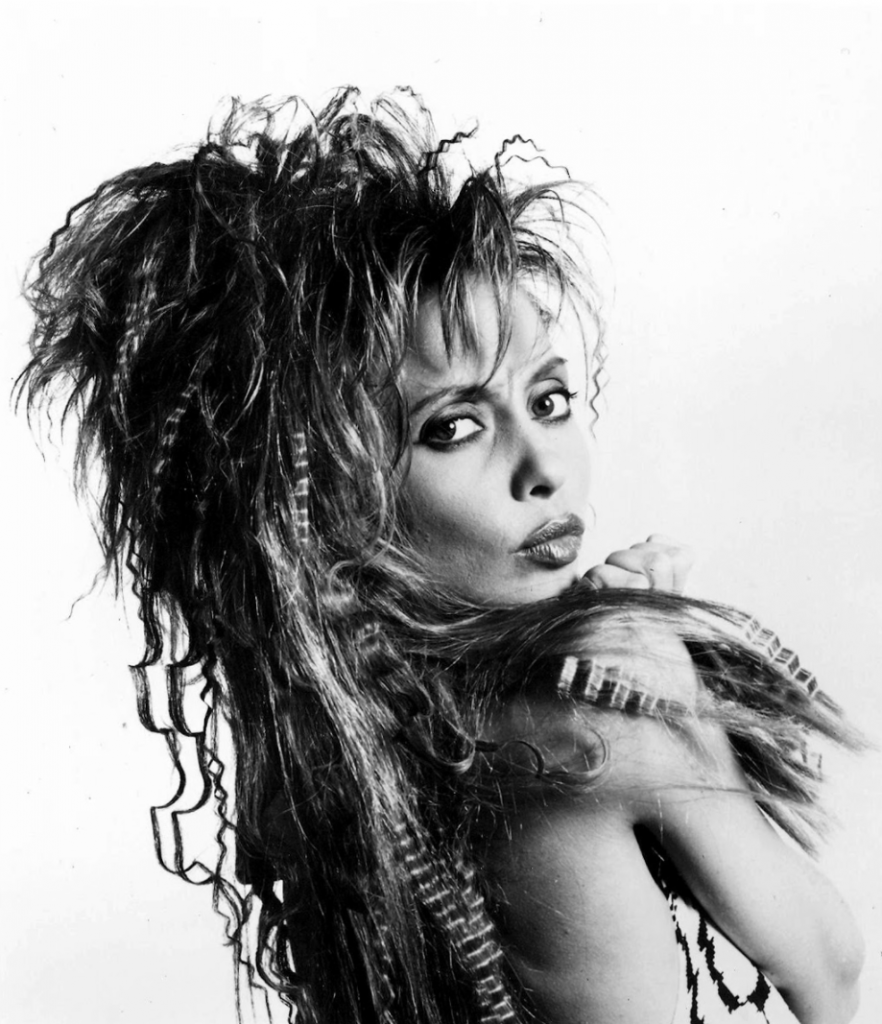 The newly rechristened Stacey Q signed with On the Spot and released a self-titled album that led her to being discovered by Atlantic.

Via Atlantic, Q released Better Than Heaven, which represented her breakthrough. Her popularity was fueled by two appearances on the hit series The Facts of Life as Cinnamon, a wannabe pop tart who performed "Two of Hearts" and "We Connect." On her final appearance on the show, the character played by semi-regular George Clooney (b. 1961) departed the series by leaving with Cinnamon to function as her roadie!

Q's later albums failed to connect (see what I did there?) with mass audiences, but I'm here to tell you they contained timeless (and in some cases timeful) pleasures.

Aside from "Two of Hearts" and "We Connect," check out 15 Stacey Q songs you just gotta love!

As Devo-ish and out-there as the band was, SSQ knew how to tell a pop-song story, such as in this totally Berlin-inspired expression of romantic frustration.

Q's debut solo single is propulsive to this day, a potent pill of attitude and style whose chorus is a killer: "I'm just a little girl in the dark / The things you say tear me apart / You know you'll get your way with my heart." It's even a li'l rap-happy. It hit #89 in the U.S.

A stand-out from this album, "Insecurity" was a single, but bombed on the pop charts, even as it gave her her first #1 hit on the U.S. dance charts. Comparing love to a flu, the song begins with a voiceover commanding, "Tell Dr. Q everything," but it's Q's yearning "where are you tonight?" that burns this one into the brain.

Another insanely good non-single from this album, "Love or Desire" ups the ante from "We Connect," offering an even more frenetic pace. To me, it's the perfect marriage of Q's cooing vs. edgy vocals and a BPM racing to beat itself. She's terrific at singing insinuations, never more so than here.

No longer chirpy, here Q sounds jaded and melodramatic, exactly right for when you're a self-absorbed teen who thinks the world begins and ends in the space of a pop tune. Plus, you get her exclaiming "boy-girl madness; I'm on fire."

The song that should've extended Q's run on the charts — but instead seemed to fizzle without any real impact — was this trend-dragging, softer, R&B-infused track. The video showed off Q's artier, more avant-garde side and presented her as a trendy but mature-looking woman, a pleasing mix of '80s provocateur and high-fashion model. It got a small boost from its use in the "D.J. Tanner's Day Off" May 6, 1988 episode of Full House. Shep Pettibone (b. 1959) mixed and edited this gem, which stalled at #66 in the U.S.

As wonderful as the album's first single was, "I Love You" is one of the best overall Q numbers, combining the best of her earlier synth direction with a house vibe. This song sounds just sa good today as it did 29 years ago.

This irresistible confection came with a chic video that showed of Q's natural dancing ability (go, Roger Rabbit, go!) as well as a more classically beautiful look, very Patsy Kensit (b. 1968). It failed spectacularly, the album coming nowhere near the Billboard 200. Can you name another 200 albums in 1989 that were clearly more important to buy the week this came out?!

With a prominent backing vocalist chanting of-the-moment things like "I am ready / and I am out the door" and "I'm hot for you," this house fire is perhaps phoned in, but she definitely called the right number with that affected French accent cooing, "Go to 'ell!" Turns out I really am a believer in miracles of pleasure!

Q converted to Buddhism, and offered a take on "My Sweet Lord" (1970) on this folky record. Sorry, I can't seem to find it on the Internet, a rare sentence indeed!

Q's flirty throwback to '90s techno was also her first solo single in over 15 years. She showed she had lost little of her instinct for a beat:

This has a total latter-day Madonna vibe, perhaps due to its love affair with vocal manipulation. Tells a great musical story you can absord while dancing your ass off:

A truly haunting ballad that might call Karen Carpenter (1950-1983) before any of the '80s divas typically associated with the Cinnamon queen. She released it along with "Love Shouldn't Be That Way" and "Just a Little Bit," also both moodier than her past work, at the same time.

Q's most recent vocal contribution is to this agreeable dance floor ditty. Her chorus makes the song.