On the occasion of the New York premiere of the classic western Shane 65 years ago today, enjoy this guest post by Rick Gould, who really digs into what is a truly mesmerizingly beautiful film that holds up to this day and that contains one of my favorite performances of all time (Jean Arthur's): 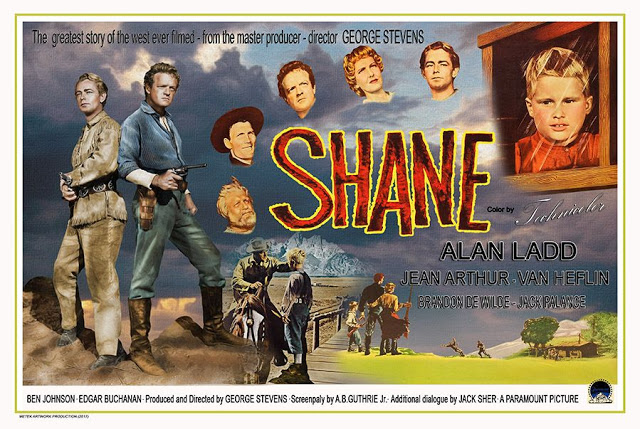 I never watched 1953’s Shane all these years because I thought it was just a typical Hollywood western. Well, George Stevens’ Shane is “just a western” about as much as his A Place in the Sun is just a romance or Giantis just another epic. Director Stevens gave depth to movie genres in his honest look at the American way of life.

I just saw Shane for the first time during a snowy spring break in Upper Michigan. My Mom couldn’t believe I’d never seen one of movie’s most famous westerns, so we watched Shane together. I was knocked out the imaginative storytelling, memorable scenes, stellar cast, authentic location shooting, and the realistic attitude about how the west was really won.

Joey: Why don't you ever wear your six-shooter, Shane?

Shane: Well, I guess I don't see as many bad men as you do.

The simple story, but with complex storytelling, was inspired by the infamous Johnson County War in 1892, when rich ranchers tried to run off homesteaders with the help of guns for hire. Adapted from Jack Schaefer’s popular novel, Shane is a gunfighter trying to escape his past. He comes upon the Starretts, a farming family who could use a hired hand. Not only are there chores to be done, a domineering cattle rancher named Rufus Ryker wants the Starretts and other homesteaders out of his way. Joe Starrett staunchly believes that he and his fellow farmers have a right to their claims. Starrett soon admires the strong, silent Shane, as does his wife Marian, and son Joey. Shane goes out of his way not to be goaded into fighting, but as the Ryker clan escalates their efforts to drive out the farmers, this inevitably leads to the climatic gunfight.

Joe Starrett: Who is Ruf Ryker or anyone else to run us away from our own homes? He only wants to grow his beef and what we want to grow up is families, to grow 'em good and grow 'em, grow 'em up strong, the way they was meant to be grown. God didn't make all this country just for one man like Ryker.

The myth that Paramount shelved director Stevens’ Shane is absurd. While Shane was shooting in the fall of ‘51, the same studio released Stevens' A Place in the Sun, a critical and commercial smash. While he was up to his elbows in pruning the fruits of his four month Shane shoot in early 1952, George Stevens won his first best director Oscar for Sun. It's highly unlikely that Paramount would then shelve their golden boy's latest movie. Stevens was famous for his long filming schedules, with footage shot from every conceivable angle, which would then take him anywhere from one to two years to edit. George Stevens Junior once said that his father’s movies were really made in the editing room.

Another hold up was when Paramount decided that Shanewould be their first widescreen film, though it was filmed in the standard smaller screen ratio. Then they decided to add Stereophonic sound to complement the big screen ratio. There was no way they were going to sit on or dump Shane. “Did you know Shane was shelved at first?” makes a good Hollywood story. Just as how The Wizard of Ozand It’s a Wonderful Life were supposedly flops when first released, these stories take on a life of their own.

Ed Howells: This Wilson, would you know him, Shane? If you saw him?

Shane: Maybe. If it is Wilson, he's fast on the draw, so be careful.

Howells: You seem to know a lot about this kind of business, Shane. I don't want no part of gunslinging. Murder's a better name.

Shane manages to be naturalistic and mythic at the same time—and this fits the talents of Alan Ladd perfectly. I had never seen any Ladd films prior, except for his last film, The Carpetbaggers. As world weary cowboy star Nevada Smith, Alan Ladd was the best thing about the shallow Hollywood soap opera.

As Shane, Alan Ladd is low-key but strong, never overacting or falling back on mannerisms. The Paramount star, in his last film under contract, is totally natural and magnetic. Alan Ladd also possessed a wonderfully resonant speaking voice, like other iconic actors of the time: Gregory Peck, William Holden, Rock Hudson, etc.

Alan Ladd was a contemporary of Tyrone Power, they were a year apart. While 20th Century Fox treated Ty like a prince in comparison to Paramount and Ladd, Power also felt insecure that he was regarded as just a pretty face. While neither were Laurence Olivier, I think both Ladd and Power were underrated by critics of the era. With Shane, you see what Ladd could do, with great material and director.

Shane: Yeah, you've lived too long. Your kind of days are over.

Ryker: My days! What about yours, gunfighter?

Shane: The difference is I know it.

Much has been made of the fact that Alan Ladd was short, especially opposite tall leading ladies or villains. Well, you know what? A lot of actors were short back then—and still are today! Back in Alan Ladd's era, three of the shortest male stars had larger than life personas at Warner Brothers: Bogart, Cagney and Edward G. Robinson. The difference was these guys were not your typical movie stars, yet comfortable in their own skins. Later, Dustin Hoffman and Al Pacino continued that tradition. Short action heroes Cruise and Stallone came later. When Robert Redford broke through in the ‘70s, his height was actually the basis of a magazine article! And Patrick Swayze, who plays sort of a bouncer version of Shane in Roadhouse, takes a lot of wisecracks for his short, slim appearance from the small town’s bad guys.

Ladd was 5'5", as if that made him less masculine. My Dad was also 5’5”—and he was not to be messed with. When I was in 7th grade, an older boy walked up to me one lunch hour. He asked if Dick Gould was my old man. I nodded yes.

The clean-cut kid smirked and said, “I’ve seen him around. He’s just a sawed-off cowboy, isn’t he?”

My dad and his equally short brothers’ reputations were pretty well-known in my hometown, so I boldly replied, “The next time you see him, why don’t you tell him that?”

The boy stared at me a moment, then walked away!

I guess that generalization makes Ladd a sawed-off cowboy, too. Yet, with his almost animal-like stare and stillness, Ladd’s totally believable as a bad ass in Shane.

Joe Starrett (to rancher Ryker): I'm not belittlin' what you and the others did. At the same time, you didn't find this country. There were trappers here and Indian traders long before you showed up and they tamed this country more than you did.

Joe: You talk about rights. You think you've got the right to say that nobody else has got any. Well, that ain't the way the government looks at it.

Van Heflin, that great star character actor, is likeable and believable as the decent farmer family man. Heflin’s Starrett is ahead of his time as a movie male who is secure with his wife’s crush on the hero. Jean Arthur was one of director Stevens favorite actresses, so he chose her as the farmer’s wife, Marion. Arthur is one of film's all-time delightful comediennes, who could also play drama. However, Arthur’s uniquely squeaky voice, especially during the film’s climatic moments, undercuts her credibility in trying to stop the impending violence. Also, Arthur at 50 and Heflin, 43, are bit long in the tooth as a pioneer couple with a small boy, and celebrating their 10thwedding anniversary. As their son, Joey, movie fans seem to either love or loathe Brandon De Wilde’s performance. I found De Wilde better than most child actors of the era, though I think his Joey is used to telegraph the film’s underlying story a bit too much.

Marion: Guns aren't going to be my boy's life.

Shane: A gun is a tool, Marion. No better and no worse than any other tool—an axe, a shovel, or anything. A gun is as good or as bad as the man using it. Remember that.

Marion: We'd all be much better off if there wasn't a single gun left in this valley—including yours.

Shane has a stellar supporting cast. Jack Palance has a small but vivid role as the ranchers' smiling gunslinger, Jack Wilson. A young Ben Johnson is intense as Chris Calloway, one of Ryker’s ranch hands. This is a rare bad guy role for Johnson—though Chris redeems himself near the film’s climax. Also, did you know that Johnson was originally a rodeo cowboy and stunt man? Emile Meyer is memorable as the firebrand ranch baron, fierce and pathetic at the same time. Elisha Cook, Jr. was born to play Stonewall, the spooked would-be tough guy.

The extensive location shooting in Jackson Hole, Wyoming is superb, with the Grand Tetons prominent in the background. Cinematographer Loyal Griggs couldn’t have been thrilled to see his work shaved from the top and bottom to appear widescreen. Perhaps the Oscar he won for Shane helped ease the pain. Today, revivals and DVDs of Shane are rightfully shown in its original ratio.

Director Stevens didn’t want the typical backlot/soundstage western look for Shane. Stevens had the characters’ homes and makeshift town constructed on location and the characters looked more sweaty than spiffy. That same realistic attitude is true with the film’s attitude toward bar brawls and gun violence. People are left with bruises after fights and lost lives leave bereaved family members bereft.

Shane: I gotta be goin' on.

Shane: A man has to be what he is, Joey. You can't break the mold. I tried it and it didn't work for me.

Joey: We want you, Shane.

George Stevens, always a socially conscious movie maker, was changed by his time in WWII. Stevens’ film unit captured the landing at Normandy, the liberation of Paris, and freeing the Dachau concentration camp. Stevens didn’t come back to Hollywood, just looking for a hit to put him back on top. George Stevens made several war documentaries, some of which were used at the Nuremberg trials. And when he did return to commercial filmmaking, George Stevens was more interested in what was going on in the world than just recycling Hollywood clichés. Even when working in the western genre, Stevens’ big fight scene were punctuated by huge close ups and excruciatingly timed punches, so audiences felt beaten and weary by the fight, too. The gunfight scenes were one of the first in film to use wires to jerk the performers back, mimicking the impact of a gunshot. Stevens wanted to show the effects of violence as well as the dilemma over the use of force.

George Stevens was a masterful storyteller, using powerful imagery and truth in his films. I knew of Shane’sfamous ending, but I was overwhelmed when I watched for the first time. The finale is truly memorable, and Shaneis still a classic.

Shane: I'm alright, Joey. You go home to your mother and your father. And grow up to be strong and straight. And Joey, take care of them, both of them.

Joey: Yes, Shane. [Tears well up in Joey's eyes] He'd never have been able to shoot you - if you'd have seen him.

Joey: He never even would have cleared the holster, would he, Shane? [calls after him] Pa's got things for you to do, and Mother wants you. I know she does. Shane! Shane! Come back!