TV icon Penny Marshall, who went on to become the most commercially successful female director of all time, has died. 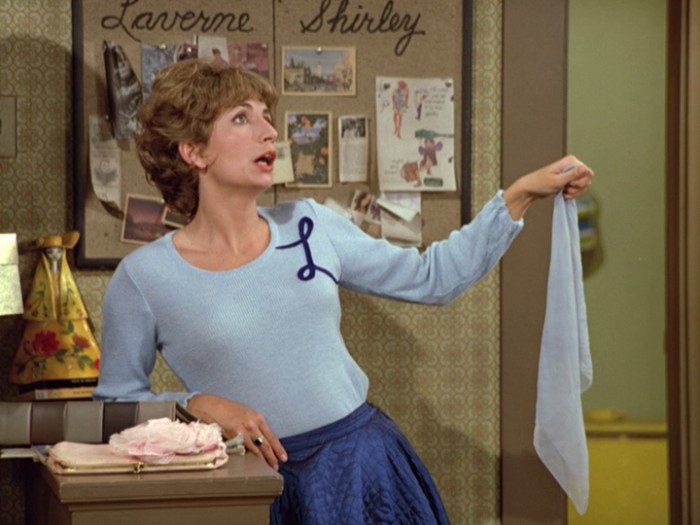 ExtraTV.com reports that Marshall, 75, died due to complications from Type 2 diabetes on Monday, December 17. She had been diagnosed with brain and lung cancer in 2009.

Marshall was born into a showbiz family, including a mother who danced, a father who directed and produced and a sister who was a casting director. Most notably, her brother was the ubersuccessful writer/producer/director Garry Marshall (1934-2016), and it was his early success in comedy that provided forum for Marshall to reveal her prodigious talents.

While in college, Marshall became pregnant with a daughter, leading to a two-year marriage to the father. They divorced in 1963 and Marshall began acting, following her brother to L.A. in 1967 and making her credited debut in the film The Savage Seven (1968), a biker curiosity that would not be emblematic of her choices.

Around this time, Marshall appeared in a hilarious TV spot with Farrah Fawcett (1947-2009), playing a plain jane to Fawcett's annoyingly perfect girl-next-door. Her trademark deadpan delivery was already locked and loaded:

As her career began taking off, Marshall met and married Rob Reiner (b. 1947), another rising star from an entertainment family. There were wed from 1971-1981, appearing in the 1978 romantic TV movie about their love affair, More Than Friends. 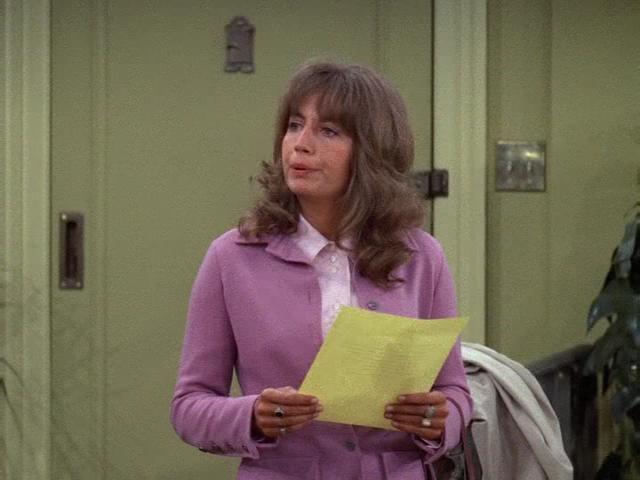 As Myrna (Image via ABC)

Her first big impression was made as Myrna, a variation on herself in which she would specialize, on The Odd Couple (1972-1974).

A winning 1975 appearance on Happy Days playing floozy Laverne DeFazio on the episode "A Date with Fonzie" led to the spin-off Laverne & Shirley (1976-1983), retooled with the girls (the other played by Cindy Williams, b. 1947) playing much sweeter.

"What an extraordinary loss. My good friend, Penny Marshall is gone — one in a million. Utterly unique, a truly great talent. And, oh what fun we had! Can't describe how I'll miss her." — Cindy Williams to Today

The on-screen chemistry between the two women was like milk and Pepsi (a favorite Marshall/DeFazio concoction).

There was an innocence to L&S — the world's oldest virgins. Ish. (GIF via GIPHY)

The show became an iconic comedy smash, allowing both to show off slapstick comedy skills.

Bad blood and Williams' leaving to have a baby took the wind out of the show's sails eventually, but Marshall appeared on every episode.

She acted only sporadically after the series ended, popping up in random films (including a cameo in 1993's Hocus Pocus alongside her brother — playing man and wife), with her final filmed performance bringing her full circle as a character on the rebooted The Odd Couple in 2016.

Marshall was pursuing directing and producing instead of seeking to act. She directed five episodes of TV (including four for Laverne & Shirley) ahead of her feature debut, the Whoopi Goldberg (b. 1955) vehicle Jumpin' Jack Flash (1986). As a bonus, she directed the music video for the film's Rolling Stones cover theme, sung by Aretha Franklin (1942-2018).

It was not a hit, but her sophomore film was a $100M smash, the 1988 comedy Big, with Tom Hanks (b. 1956). An A-lister, she followed it in short order with Awakenings (1990), which was Oscar-nominated for Best Picture but not for Best Director, and the $100M smash A League of Their Own (1992), selected for preservation by the U.S. National Film Registry for its cultural importance.

Her hits may have made her the most commercially successful female movie director in history.

Outside of acting and directing, Marshall was an effective Kmart pitchwoman with sidekick Rosie O'Donnell (1962) in 1996. The same year, she made a cameo on SNL to support Whitney Houston (1963-2012), her Preacher's Wife star.

In 2012, Marshall published the memoir My Mother Was Nuts, and made a number of public appearances at autograph shows with Cindy Williams and her brother.

The Lakers fan is survived by daughter Tracy Reiner (b. 1964), who appeared in A League of Their Own.

#RIPPennyMarshall She was funny & so smart. She made the transition from sitcom star to A List movie director with ease & had a major impact on both mediums. All that & always relaxed, funny & totally unpretentious. I was lucky to have known & worked with her. https://t.co/pf2kfIkCH4

I don't know what to say.

Goodbye, Penny. Man, did we laugh a lot! Wish we still could. Love you. Hanx.

So Lucky to have known you and worked with you Penny Marshall!! ♥️ Your Talent was as BIG as your Heart! ♥️ and you were aTrailblazer For Women In Hollywood! ?? GOD BLESS you and your family! #pennymarshall #leagueofthierown

Penny Marshall &I made Jumping Jack Flash together & the 1st film she directed & the second film i was ever in.We laughed, we yelled & for her i was a little black woman in a big silver box”being dragged thru the streets of LA. My condolences to Tracy &family RIP Penny Marshall

What an inspiring woman #PennyMarshall was. Funny, talented, kind and giving. Penny was so supportive of my career from the very beginning and I will always be so grateful. A wonderful actress, producer and director. She will be missed by so many. #RIP

Penny Marshall was a sweet woman. I was very fortunate to spend time with her. So many laughs. She had a heart of gold. Tough as nails. She could play round ball with the best of them. Always All love, D

I grew up wanting to be as funny as Penny Marshall, and had the pleasure of meeting her a few times. Watch some old Laverne and Shirley to see why her brother Garry insisted on casting her. Comedy gold, she was. ♥️ pic.twitter.com/DhP10j7m8s

Thank you, Penny Marshall. For the trails you blazed. The laughs you gave. The hearts you warmed. pic.twitter.com/7qPKJa6ApH

Rest in peace, Penny. Such a wonderful, funny and talented lady. Without her support and encouragement, I would not be where I am today. She will be missed. ? #PennyMarshall pic.twitter.com/F9ksywXYuG

Yesterday I held a Golden Gloves award from the 1930’s, given to me by Penny Marshall.
Hadn’t seen it in years.
Then today’s news...
Penny told me the story of Jim Braddock, which became the movie Cinderella Man. She was kind, she was crazy,so talented and she loved movies. RIP

RIP Penny Marshall!! Thank you for what you contributed to us girls. Grateful to have worked with you. Rest well you great Broad!!!❤❤❤ pic.twitter.com/4hk6AGjmB1

Penny Marshall had me audition 6 times for a role and then I didn’t get it. She didn’t know that I would audition for her forever. It was a treat to be in the room. She was glorious. #RIPPennyMarshall

Sad to hear of Penny Marshall’s passing. a great comedienne a terrific director and a dear friend.

So sorry to hear about Penny Marshall. I have great memories of attending many of her birthday parties with Carrie Fisher in the early days... and she came to so many of my concerts. May she rest in peace.

Today we learned that Penny Marshall passed away. Growing up in the woods of Rhode Island, the TV was my most reliable friend. If I was bullied at school I knew I could watch my favorite… https://t.co/LLSHAeLRFT

No words can describe the lessons she taught me about being a woman, about courage, about tenacity. And always with an innate believe in the absurdity of this thing we call life. Thank you from the bottom of my heart Penny. #rip #pennymarshall #big pic.twitter.com/euj8hTMA3H

I had the pleasure of meeting Penny Marshall at a Sparks game. Our seats were together, so I got to talk with her during the season. Grateful that I was able to thank her for knocking down barriers and tell her how much I loved her and her work. Rest In Peace. #PennyMarshall

Hard to imagine 2 movies that remind me more of my childhood and that first feeling of wanting to be in entertainment than Big and A League of Their Own. I saw A League of Their Own at the Cineplex Odeon in Fresh Meadows, Queens at a sneak preview. RIP Penny Marshall and thank u.

Rest in peace to my great friend, Penny Marshall. We shared a lot of laughs and good times together.

Penny Marshall will be greatly missed. A true legend and influential spirit in Hollywood. Paving the way for many, including myself. ❤️ #RIPPennyMarshall pic.twitter.com/A6PJfFnh7G

Two of my favorite movies were “A League of the Their Own” and “Big.” We lost a legend today. Rest In Peace, Penny Marshall.

The Marshall family grieves again as the great #PennyMarshall dies at age 75. What an extraordinary family they were and continue to be, and how much love and sympathy my family and I send their way. The end of an era.