Another major horror director has died — Tobe Hooper, forever identified with his breakthrough (perhaps cutting-edge would be putting too fine a point on it?) The Texas Chain Saw Massacre, passed away Saturday. He was 74.

Tobe Hooper, the man who reinvented the horror genre with his outrageously gory The Texas Chain Saw Massacre in 1974, died Saturday of undisclosed causes, ExtraTV reports.

Following a 1964 slapstick short and his 1969 feature debut, the allegorical Eggshells (see Hooper speaking about it in 2014 above), Hooper unleased upon the world his unforgettably nihlistic The Texas Chain Saw Massacre. Based on the real-life serial killer Ed Gein, the story followed five young people visiting a grave, only to find it ritualistically defiled. They wind up eating home-cured meat at a gas station (never eat home-cured meat at a gas station, kids) and the find themselves in the home of what turns out to be a diabolical family of cannibals, headed up by the saw-wielding madman Leatherface.

The movie's nonstop terror and gory murder scenes made it a sensation, leading it to gross 100 times what it cost to make.

The film spawned many sequels (Hooper directed only the campy first one, in 1986) and spin-offs, and became one of the genre's most identifiable, original and influential entries.

Don't let the wrong one in! (GIF via Warner Bros. TV)

Hooper's next big gig was directing Salem's Lot, a miniseries based on Stephen King's novel of the same title.  The 1979 TV event starred David Soul, James Mason, Lance Kerwin, Bonnie Bedelia, Marie Windsor, Lew Ayres (who told Hooper to get into his costume and “do it yourself!”) and many others, marking Hooper's first time working with established talent in a mainstream production. The Gothic vampire flick is highly regarded, and was edited into a feature for release overseas. I for one will never forget the vampire kid scratching on the window, asking to be let in. 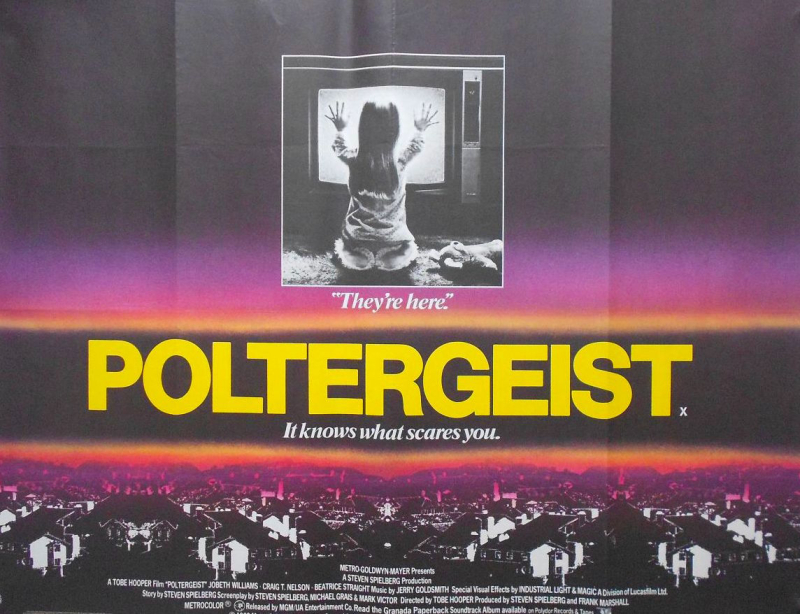 Hooper's most mainstream project was 1982's Poltergeist, one of the most beloved and successful films of the '80s. Written and produced (and some have hinted really directed) by Steven Spielberg, the story of a middle-class family unwittingly moving into a home built on a graveyard grossed over $76 million in the U.S. (a lot more than its embarrassing, Hooper-free, 2015 remake).

The film containd many unforgettable moments, including Carol Ann (the late Heather O'Rourke) placing her hands on a staticky TV screen and calmly announcing, “They're heeere”; a man tearing off his own face in a hallucination; JoBeth Williams struggling to get out of a pool while surrounded by bobbing corpses; and the late Zelda Rubinstein (an early AIDS activist in real life) as Tangina, a freaky psychic mistakenly proclaiming, “This house is clean.”

After a memorably silly zombie-themed video for Billy Idol's “Dancing with Myself” (1983), Hooper stumbled with leaden sci-fi flicks Lifeforce (1985) and Invaders from Mars (1986), the latter an ill-advised remake of the '50s classic. Following these missteps, he worked in TV and went back to directing low-budget horror films, none of which made the impact of his earlier work.

Hooper's final films were Destiny Express Redux (2009) and Djinn (2013), for a total of 15 features throughout his career.

He is survived by his two sons.