Joan Collins Returns To Movies — Plus, 7 Other Joan Gems!

Joan Collins (b. 1933) is best-known as Dynasty's Alexis Morell Carrington Colby Dexter Rowan, but she's been in some movies over the years that are well worth checking out.

Joan with Pauline Collins, her The Time of Their Lives co-star (Image via Gravitas)

On the occasion of the November 28 U.S. digital release of her latest film, the older-lady buddy flick The Time of Their Lives, check out my Top 8 Joan Collins perfs in movies until now — including one TV film I just couldn't say no to: 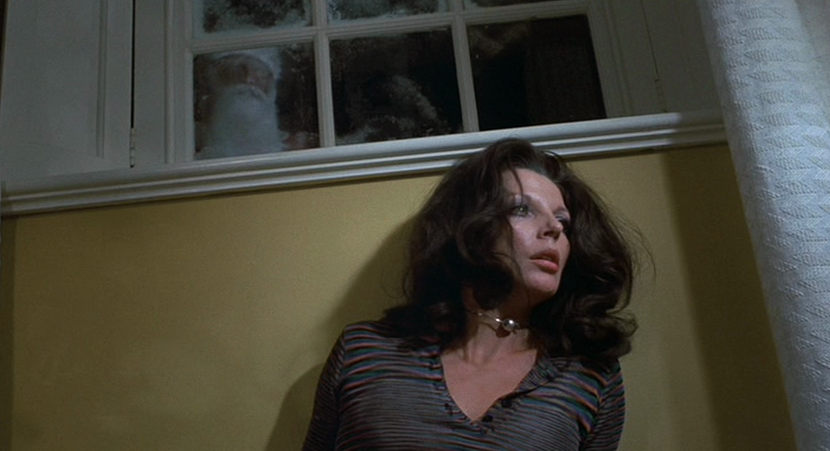 This pleasing collection of spooky tales is reminiscent of The Twilight Zone or Night Gallery. It's pretty much a perfect horror-genre treat, consisting of the stories of five strangers who meet under mysterious circumstances on a tour of an ancient crypt, managed by a stern Crypt Keeper (Ralph Richardson, 1902-1982). Joan is in "... And All Through the House," a taut thriller about a heartless wife who murders her old hubby on Christmas Eve and finds she must deal with the dead body and an escaped maniac who has unfortunately selected her home to terrorize. Good acting, Joan is at her ripe sexiest, and each segment has a creepy joy to it. The other stars include Peter Cushing (1913-1994)and Roy Dotrice (b. 1923).

You'll have to endure a little brownface. (Image via Warner Bros.)

The Cinemascope epic directed by Howard Hawks (1896-1977) that launched Collins in the U.S. This fictional account of the building of the Great Pyramid is lush stuff, boasted a cast of thousands and features a performance by Joan in which she gave it her all. The costumes are everything. Worth noting: Martin Scorsese (b. 1942) loves this flick. 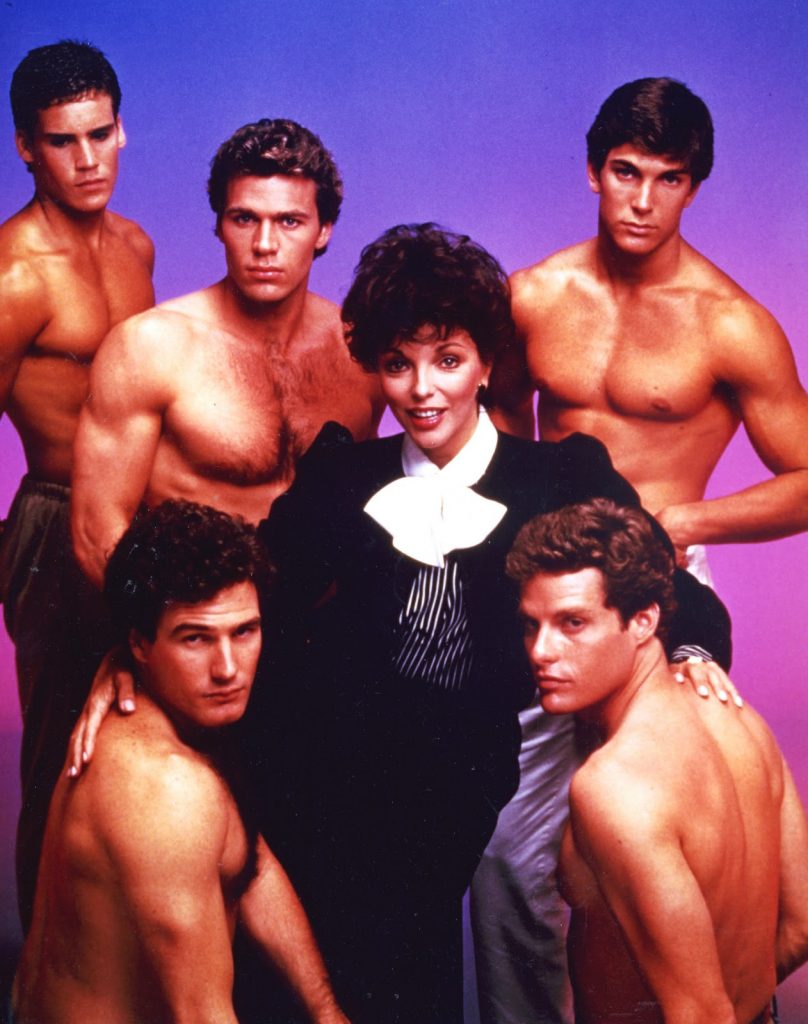 Airing on October 9, 1983, Joan's first big side project to be filmed after her monumental success on Dynasty, this sexy, exploitative TV movie co-starred Jon-Erik Hexum (1957-1984), a beautiful stud whose career and life would be cut short the following year when he fatally wounded himself while goofing around with a prop gun on the set of his series Cover Up (1984). Joan plays Kay Dillon, a modeling agent who samples the goods. In real life, it was suggested that Joan and Jon-Erik samples each other's good for real, but neither confirmed it. The movie is a distillation of what was hot in the '80s — glitzy people who are sad in spite of being at the top of their game. Watch for hunky Ted McGinley (b. 1958) and Jeff Conaway (1950-2011), the latter histrionically memorable. 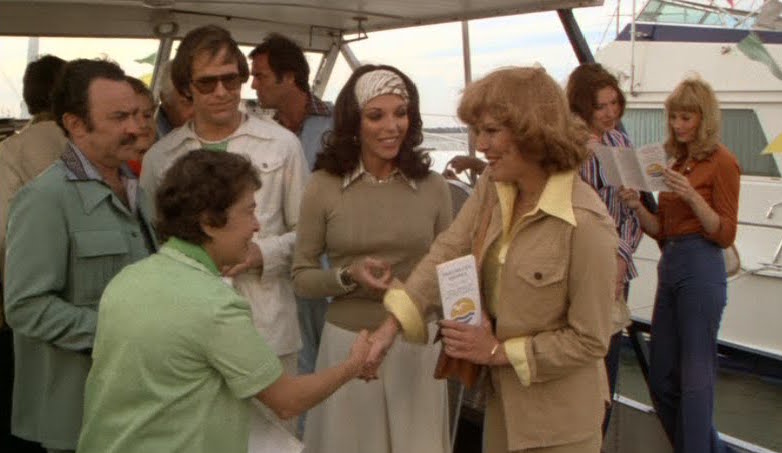 Do not buy beachfront property from this dame! (Image via Cinema 77)

This one is so bad it's good — but it really is that bad, and that good. In this loose adaptation of a 1905 short story by H.G. Wells (1866-1946), Joan is a not-so-nice land developer (when are they ever nice?) faced with the sudden creation of massive ants after a toxic spill near the beachfront properties she's peddling. Watch for Chris Pine's (b. 1980) sexy dad Robert Pine (b. 1941), who has said the actors were dumped into a body of water that contained live crocs. 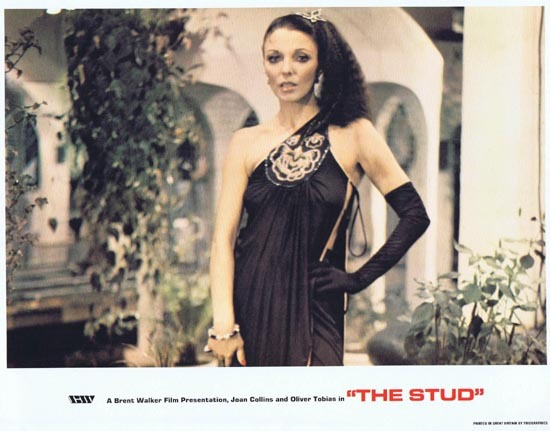 She raised the bar — the Hobo, that is. (Image via Thorn EMI)

Based on a 1969 novel by her late sister Jackie Collins (1937-2015), this wild ride is all about Fontaine Khaled (Joan), a bored housewife whose rich hubby (Walter Gotell, 1924-1997) can't keep up with her nympho, partying ways. She owns the club Hobo, where she begins a tempestuous affair with club manager Tony (Olivier Tobias, b. 1947), but Tony later balls her stepdaughter (Emma Jacobs, b. 1958) — a great way to deliver karma and get your jollies, no? The naked swinging scene is TDF. 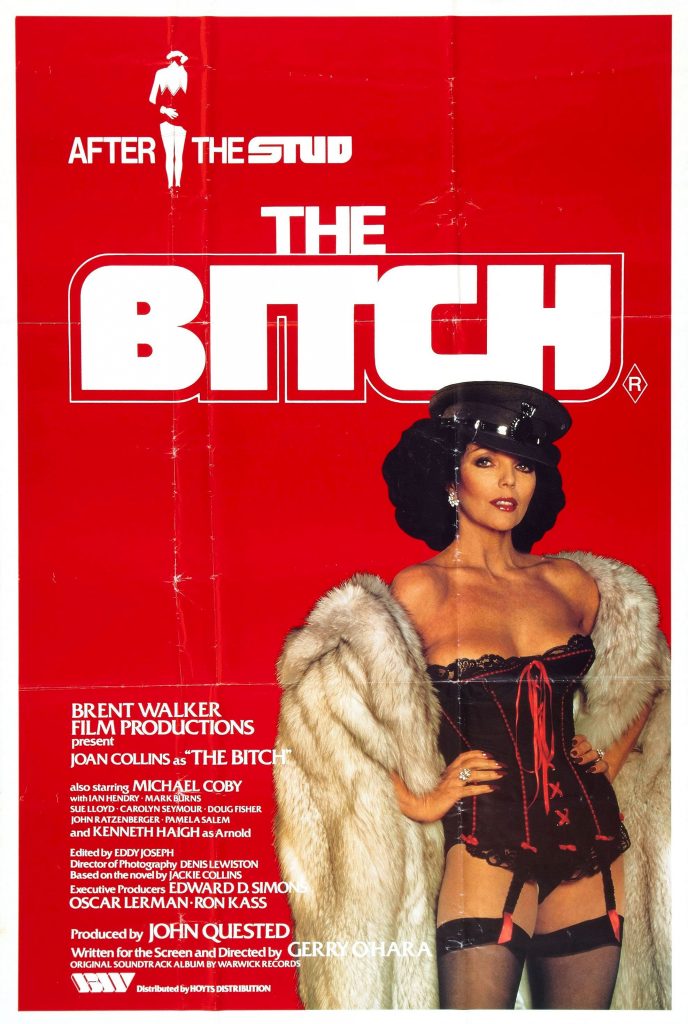 Fontaine likes her posters like her men — well-hung. (Image via Thorn EMI)

The sequel to The Stud was an international smash hit for Joan, and a continuation of the sleazy good fun in the previous movie. This time, Fontaine (Joan) finds herself dealing with a mob encroachment upon her disco, based on the legendary Regine's. Joan's career was majorly boosted by her appearances in The Stud and The Bitch, parts that directly led to her casting on Dynasty in 1981. 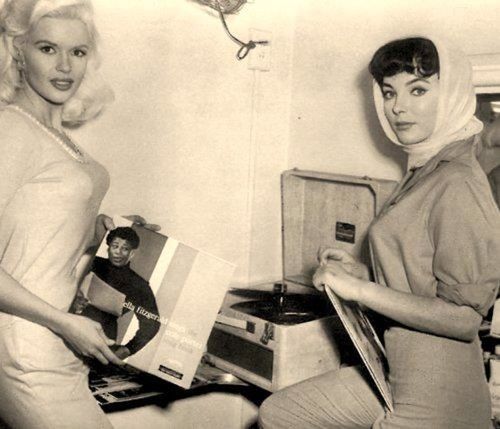 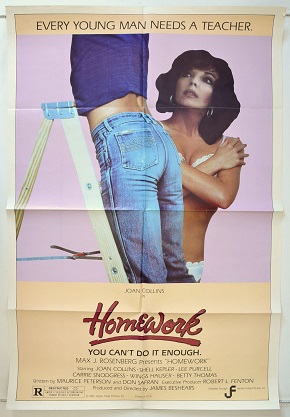 If this is what homework were like, more boys would do it. (Image via Farley Jensen)

A typical '80s sex comedy finds Joan, in her late forties, seducing one a pothead high school student who, in spite of being scorchin' hot, is a virgin — the kinda shit you get arrested for these days! Michael Morgan (1959-1999) is the horndog, a towhead with no sexual experience but plenty of imagination — the film even has some softcore fantasy sequences that probably embarrassed at least some of those involved. Carrie Snodgress (1945-2004), for one, is way beyond this stuff as a bemused school shrink. But this is about Joan, and Joan is effortlessly sexy in a somewhat leaden film curiously bereft of background music. Morgan, down on himself, at one point declares himself a "faggot," which is typical of the era.