Bananarama’s Comeback, Plus: Their 15 Best Singles

Bananarama, one of the most famous and successful girl groups of all time, is currently on a wildly successful reunion tour, one that seems destined for North America, judging by a cryptic note on their official site.

They look and sound fantastic, and they sure haven't lose their flair for killer wardrobe. (Fun fact: Didja know Keren's partner is Andrew Ridgeley of Wham! fame?)

Here are the ladies back in May, talking about their rift 30 years ago, and what brought them back together:

Far more successful in the U.K., the girls were nonetheless a sensation in the U.S., racking up three Top 40 hits while scoring quite a few more on the Billboard Hot 100 and on the dance charts. 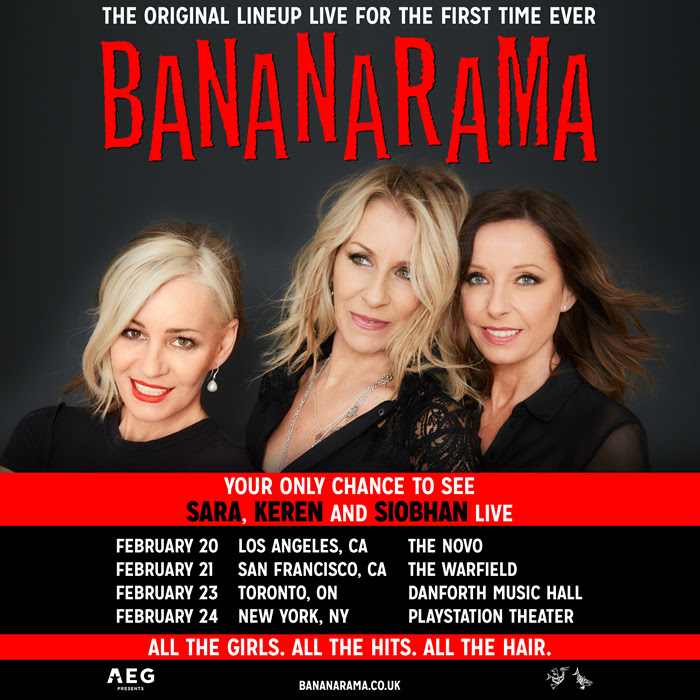 In honor of the group's return — their tour marks the first time the original lineup has toured — here are my Top 15 Bananarama singles featuring that lineup, in order from least to most (and leaving out the ones I have no real use for) fave:

This one hasn't aged well, certainly not as well as the women have. It's simple to the point of ephemeral, but it would still help me embarrass myself on a dance floor if a DJ whipped it out:

Never got into this one, but it was a massive hit in the U.K., and might be their earliest song any significant percentage of '80s music buffs could I.D.

The girls tried social justice on for size with this sweet tune, which has a pleasing Simon & Garfunkel lilt:

This one was a clear precursor to "Robert De Niro's Waiting" in 1984, and while it helped them to attract some American attention (#108, bubbling under), it's a touch languid for me. But the girls look superhot in the music video. Check out Siobhan's Madonna/"Everybody" vibes:

A very B-52s joint that didn't hit the U.S. charts, and quite a leap from this to later pop hits. This really shows off their early-'80s British invasion phase before a sugarier future:

This one was a hit on the soundtrack for the Chris Penn escapist comedy movie of the same name. As such, its video features Hart Bochner, who appears as a cop in the film. Due to the film's semi-success in the U.S., the song charted higher (#70) in the U.S. than it did back in the U.K. Effortlessly catchy chorus:

Swahili disco from a bunch of white girls would seem to be blasphemous cultural appropriation today. (Let's not talk about the blackface in 1988's "I Want You Back" video.) But thirty-six years ago, it was more a way of being inclusive and appreciating different musical styles. This song is rife for sampling.

Their "Copacabana," a yearning story song whose video featured some happenin' headwear:

Kind of a Depeche Mode track sung by Bananarama, this intense number should have been more of a hit in the U.S. — althought #76 is nothing to sneeze at:

It's hard to come up with a song about a topic that isn't overdone, and a single about catcalling certainly wasn't something Casey Kasem would've been used to. Unfortunately, this gem was a little too out-there for U.S. audiences, perhaps because name-checking De Niro, then a 40-year-old man, didn't fly with the teenybopper set. Too cool for the American room?:

For girls who wrote a lot of their own stuff, they became associated with remakes when they took this 1969 Shocking Blue rock song and turned it into a scorching-hot disco cover. That feline, "Wow!" really sold it. A #1 smash in the U.S., it's such a great song, it's hard to judge it against their other stuff because it's so damn famous:

I personally can't help preferring this non-Top 40 (it came close!) tune over some of the group's smashes. Something about the whipcord lyrical structure and the way the song builds into the chorus is "honey" to me:

Such an adorable love song, and those joyous horns. This one feels the most like the work of their spiritual predecessors, the Supremes ... even more so than the later "Nathan Jones" remake:

Their second-biggest U.S. hit was this Stock/Aitken/Waterman slice of perfection, which represented a slick, infinitely appealing streamlining of them musically and visually. Heaven, and Carmen Miranda is evoked in the video:

Undeniably cooler than almost any other song on the U.S. charts at the time this one came out, "Cruel Summer" effortlessly captures both the group's signature sing-song sound as well as a radio-friendly Chic-esque bassline. The NYC-centric video was a smart move, one that helped secure them a Top 10 smash in the U.S. Timeless: