‘A Tad Overweight, but with Violet Eyes to Die For’: Elizabeth Taylor’s Middle Age

Garry Trudeau (b. 1948) immortalized Elizabeth Taylor's (1932-2011) mid-life dilemma in Doonesbury with a series of strips lampooning her role as a politician's wife during her marriage to future Sen. John Warner (b. 1927), a Virginia Republican.

Cynically, "Senator and Mrs. Taylor," as Trudeau referred to them, were depicted as political lightweights and La Liz as a middle-aged heavyweight, said to have a bumper sticker that read, "A tad overweight, but with violet eyes to die for."

Middle age wasn't a cake walk for the former most beautiful woman in the world. 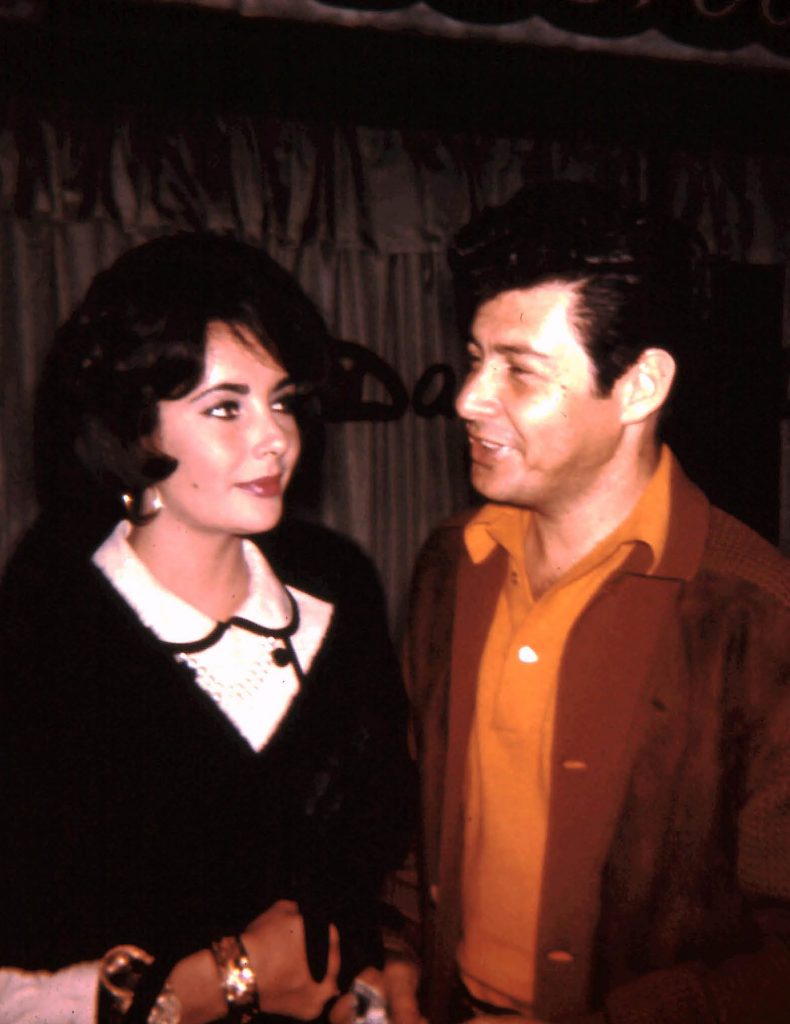 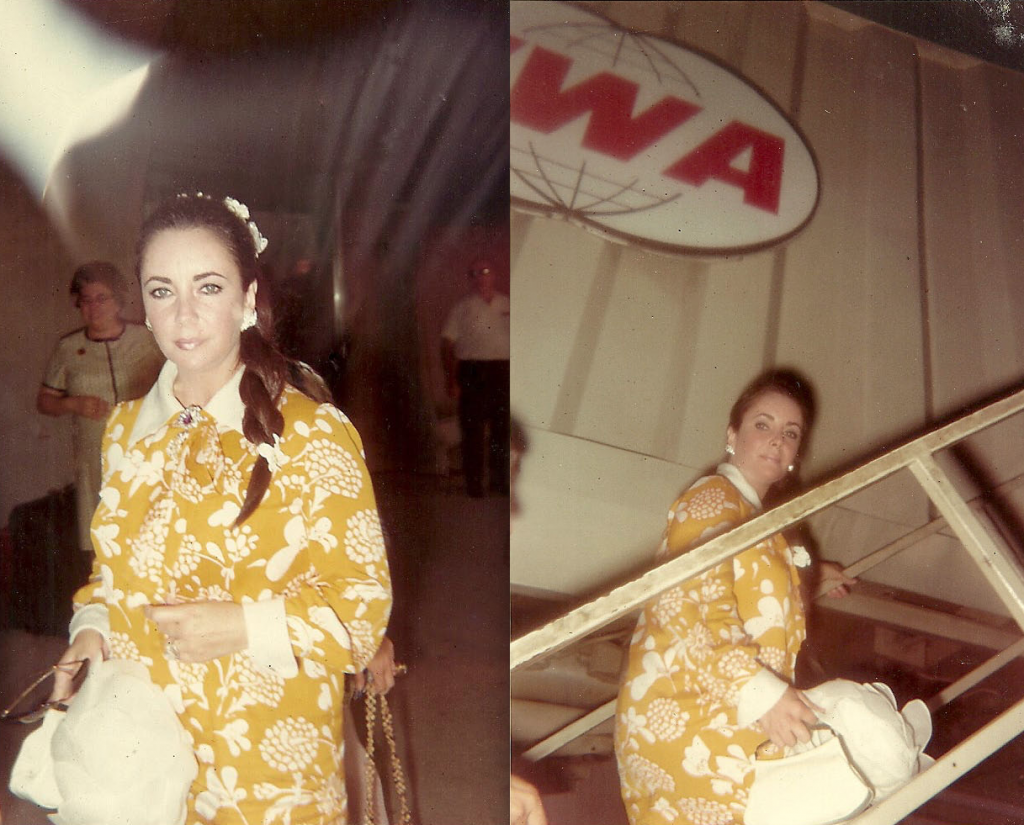 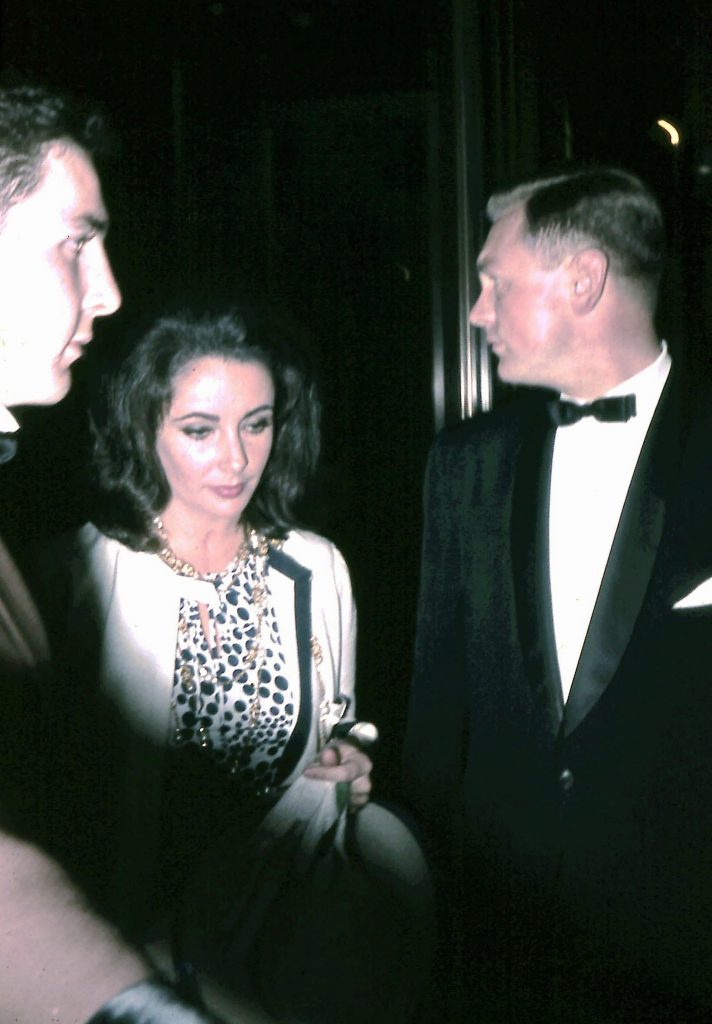 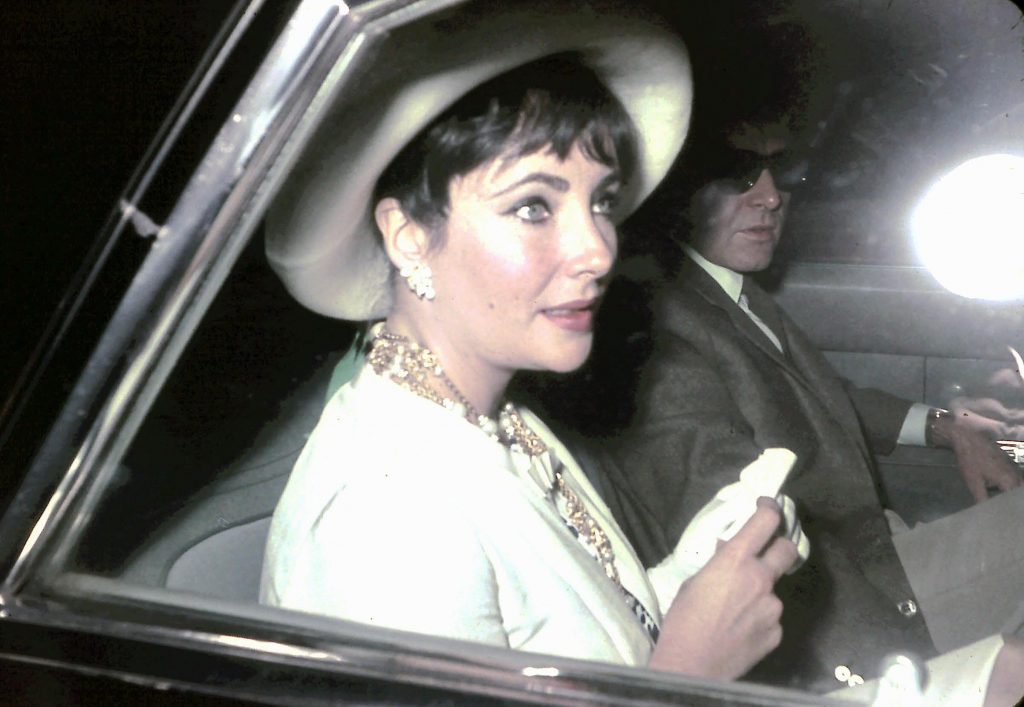 After a performance of Burton's Hamlet on Broadway, and picking him up, 1964 (Images by Bob Deutsch)

She had won a second Oscar for playing a past-her-prime professor's wife in Who's Afraid of Virginia Woolf? (1966). Only 33 at the time it was filmed, she'd been made up and styled to fit the part. 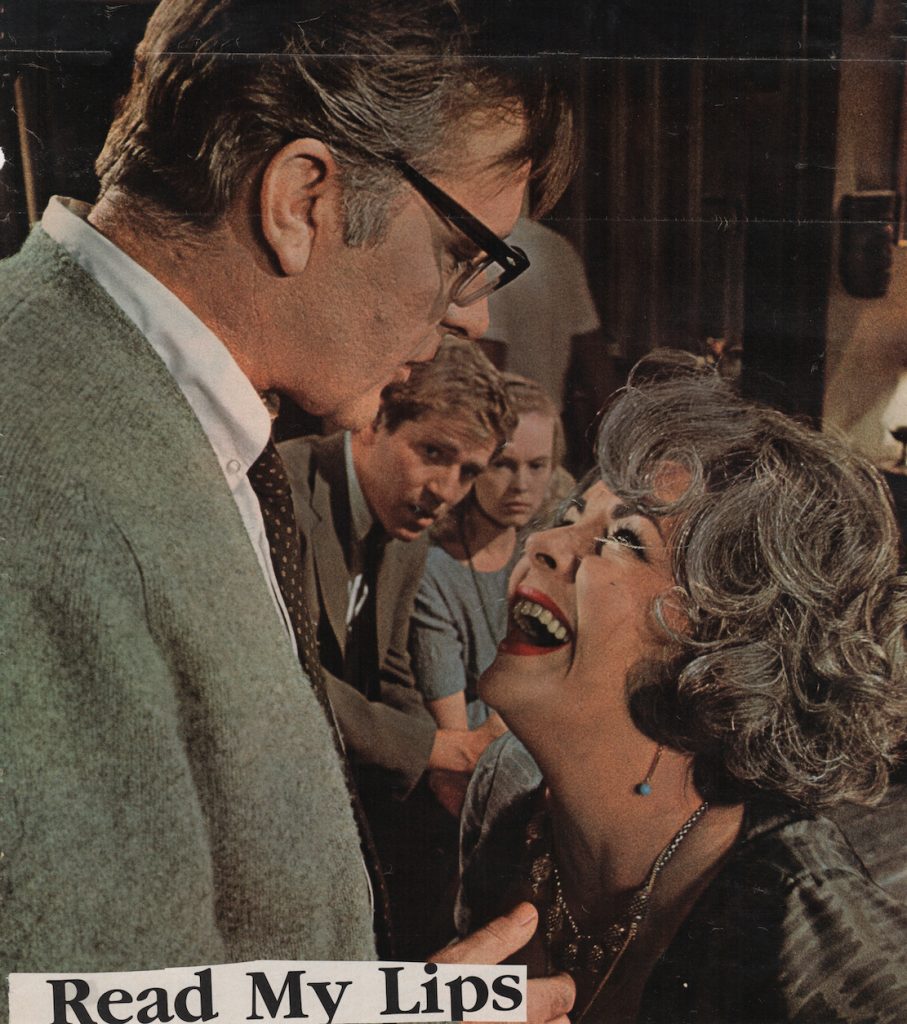 Who, indeed, is afraid? (Collage elements by Matthew Rettenmund/Warner Bros.)

Within 10 years, she was openly discussed as being over the hill in reality, taunted for her weight and haunted by the changes in her appearance.

This period consumed the late 1970s and part of the 1980s, the era when Liz Taylor fat jokes were in fashion. 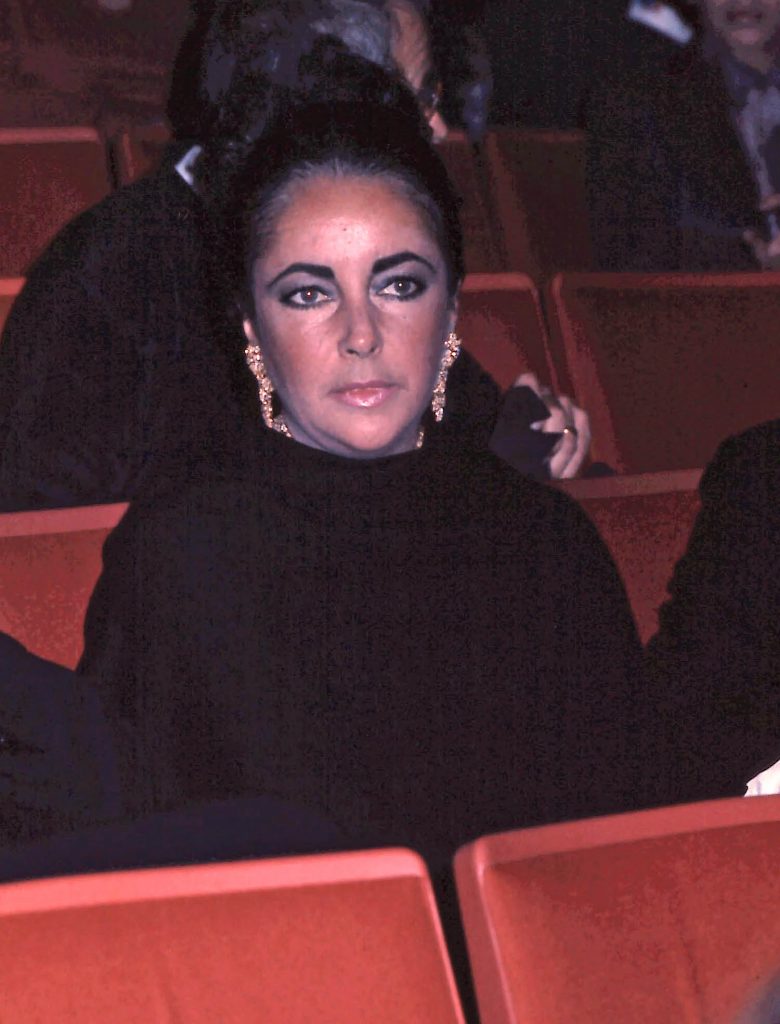 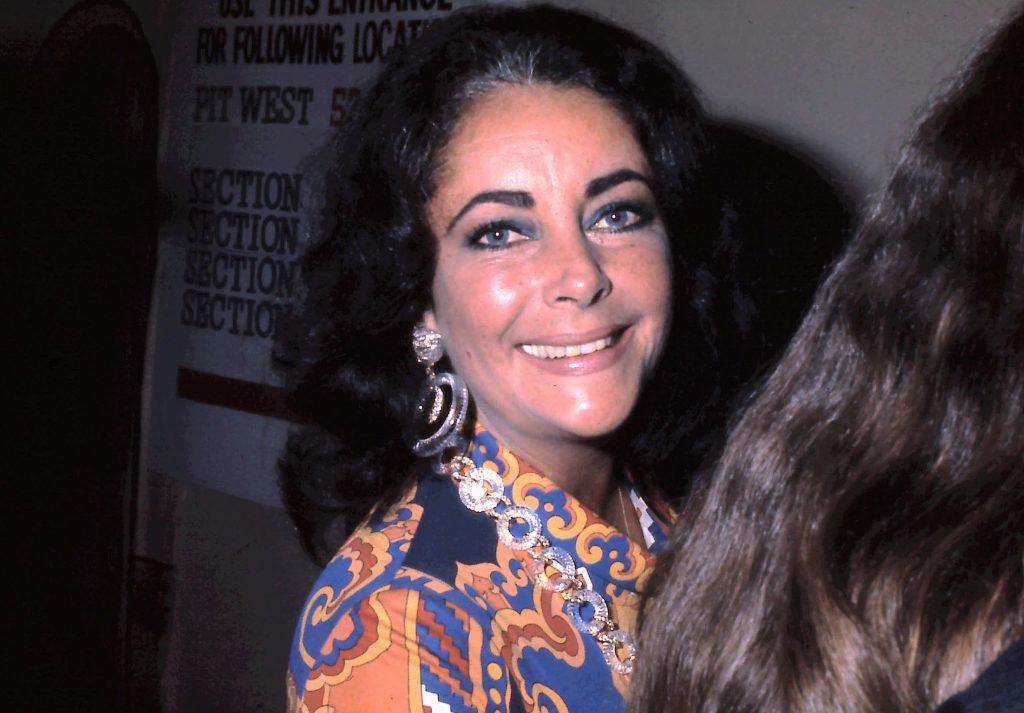 At a play in 1979 with BF Henry Wynberg, who later sued her over her Passion fortune (Image by Bob Deutsch) 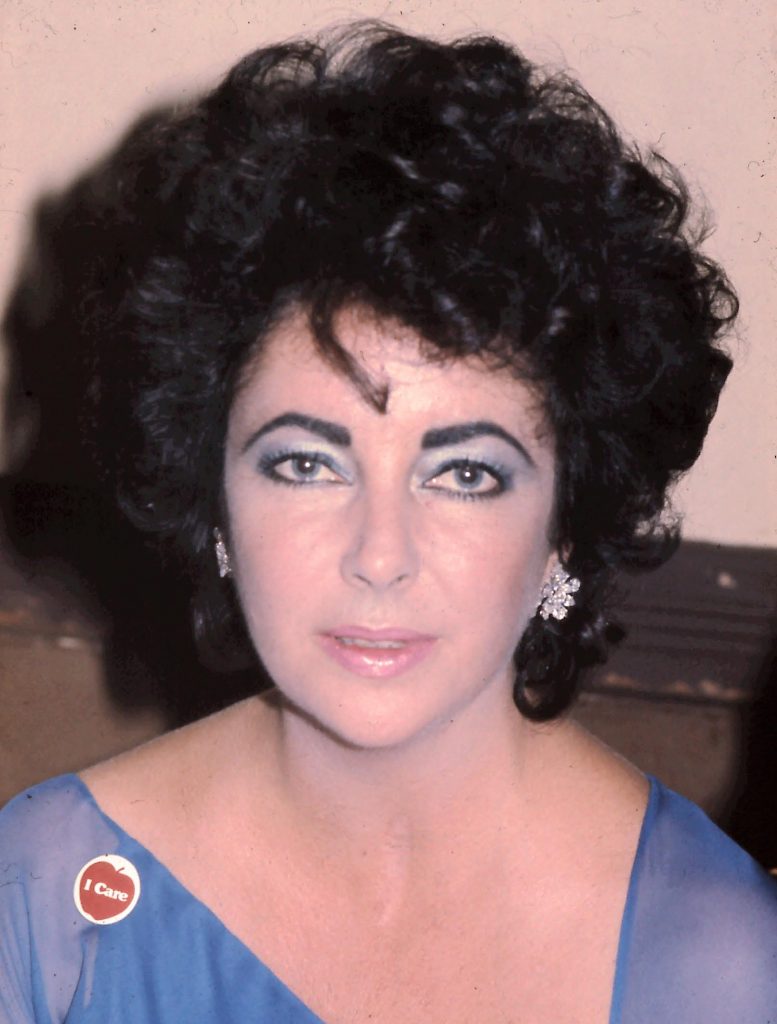 Still striking, but forlorn circa mid-'70s (Image by Bob Deutsch) 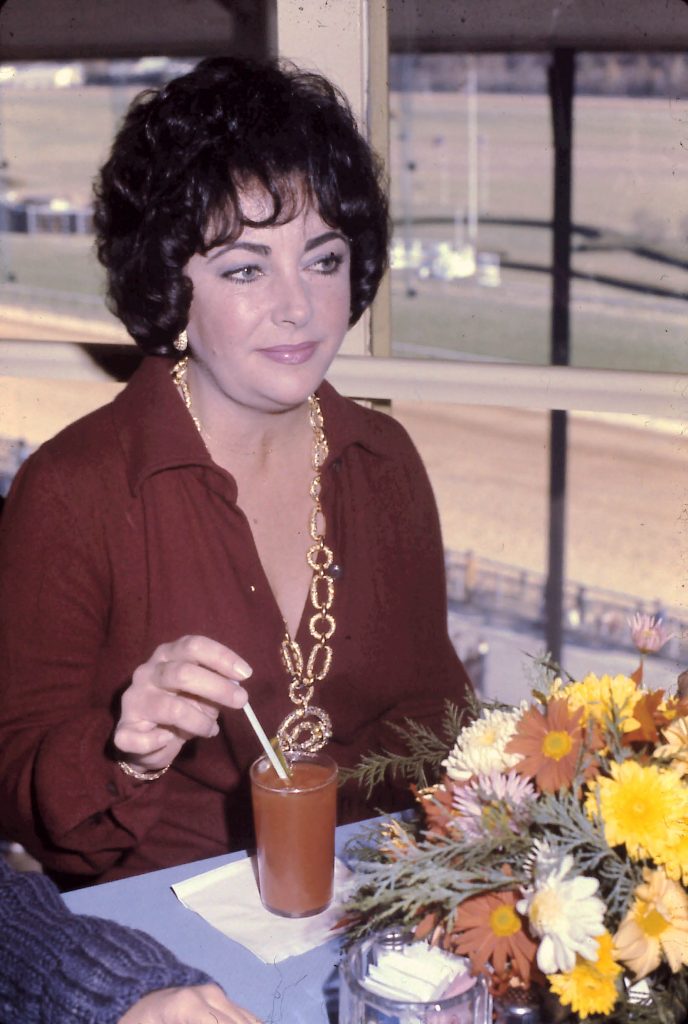 Bloody fed up with a bloody mary at a Delaware race track, 1979 (Image by Bob Deutsch)

John Belushi (1949-1982) viciously skewered Taylor after it was reported she had choked on a chicken bone in 1978, appearing in drag on SNL for an interview with Bill Murray (b. 1950). 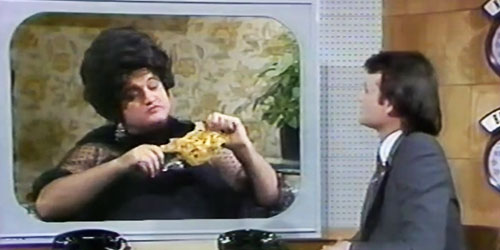 Joan Rivers (1933-2014), who had joked that Taylor's blood type was Ragú, also told this humdinger during her long campaign mocking Taylor's slip from perfection:

“She has a bumper sticker that says, ‘Save the whales’ and in small print, ‘for appetizers.’ ”

Rivers, a fan of Taylor's who said she was rooting for her to lose weight, claimed Taylor was never hurt by the digs, but that's not true. Taylor later told Barbara Walters (b. 1929) they hurt a lot, and that while she laughed loudly at the time, she felt they may have led her to get even heavier:

From Taylor's friend Maury Hopson's piece in Vanity Fair documenting their stay at a Florida fat farm in the late '70s:

When Elizabeth was living in Washington, D.C., during the late 70s, her spirits were not great ... She and I joked that her only exercise was changing the TV channels with the remote — I told her she was going to end up with an overdeveloped thumb. Plus, the fried chicken, biscuits, and creamed gravy made by the wonderful chef in the downstairs kitchen were only an intercom call away ... I talked to her about going to a spa to drop a few pounds and clean up a little ... We toyed with the idea of naming it “Butterball 8,” but decided on “Butterfield Ate” — our home for the next three weeks.

By 1981, fed up, Taylor had lost 30 pounds to appear on Broadway in The Little Foxes. 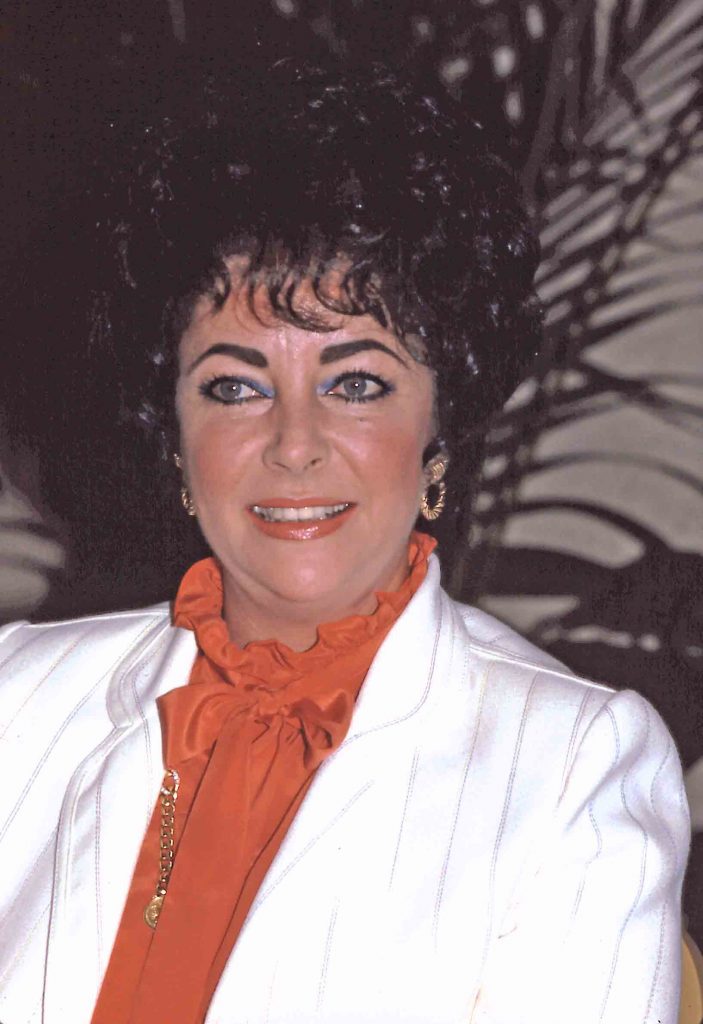 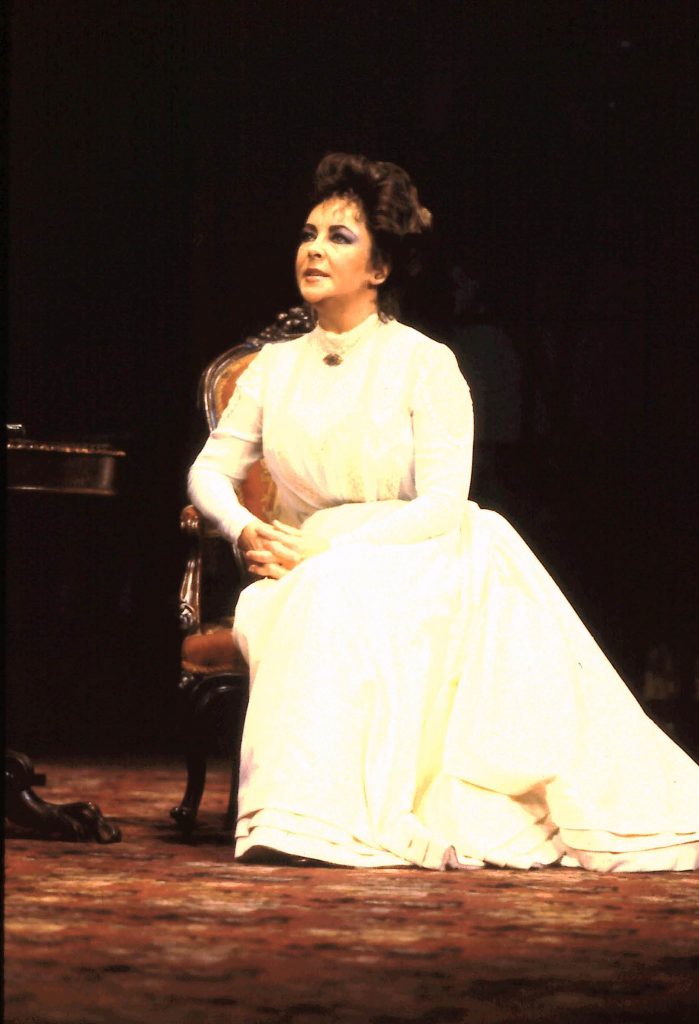 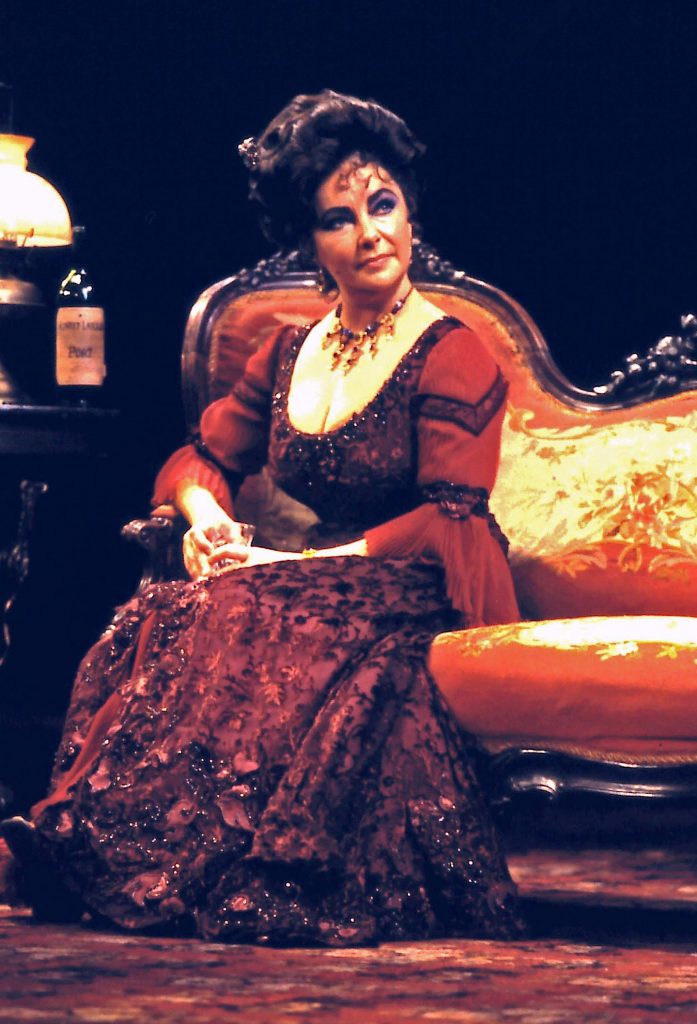 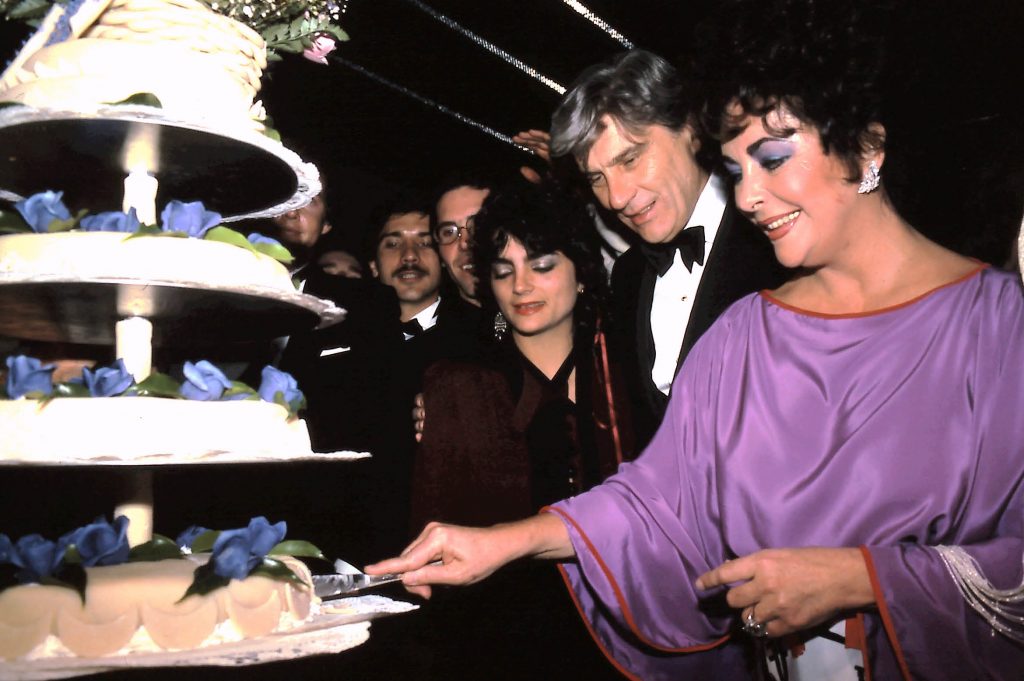 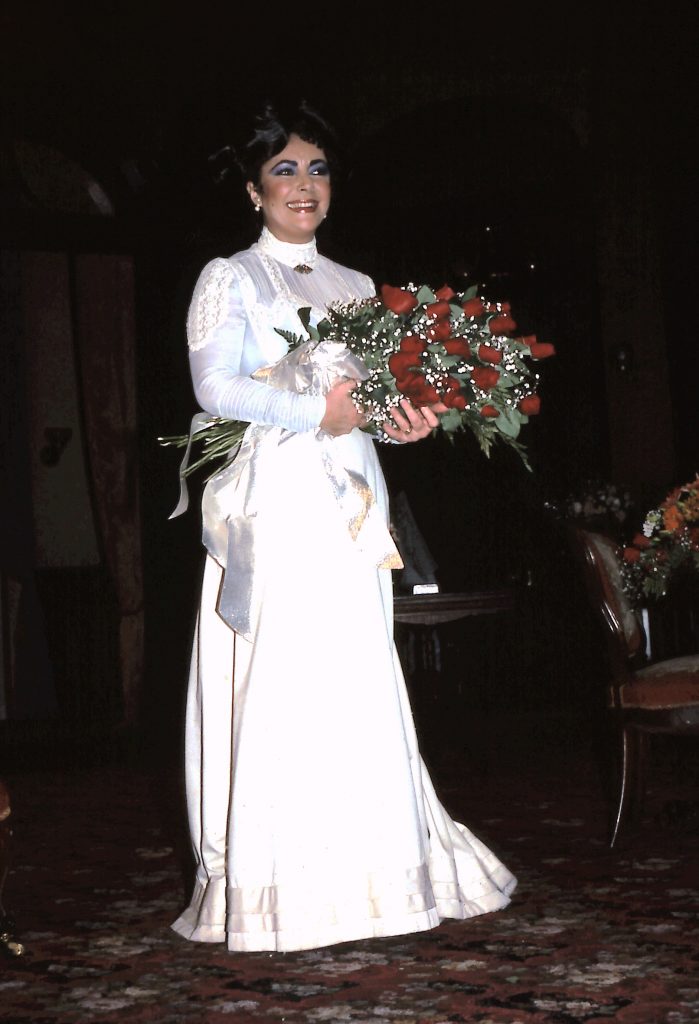 Onstage after opening night of The Little Foxes on Broadway, 1981 (Image by Bob Deutsch) 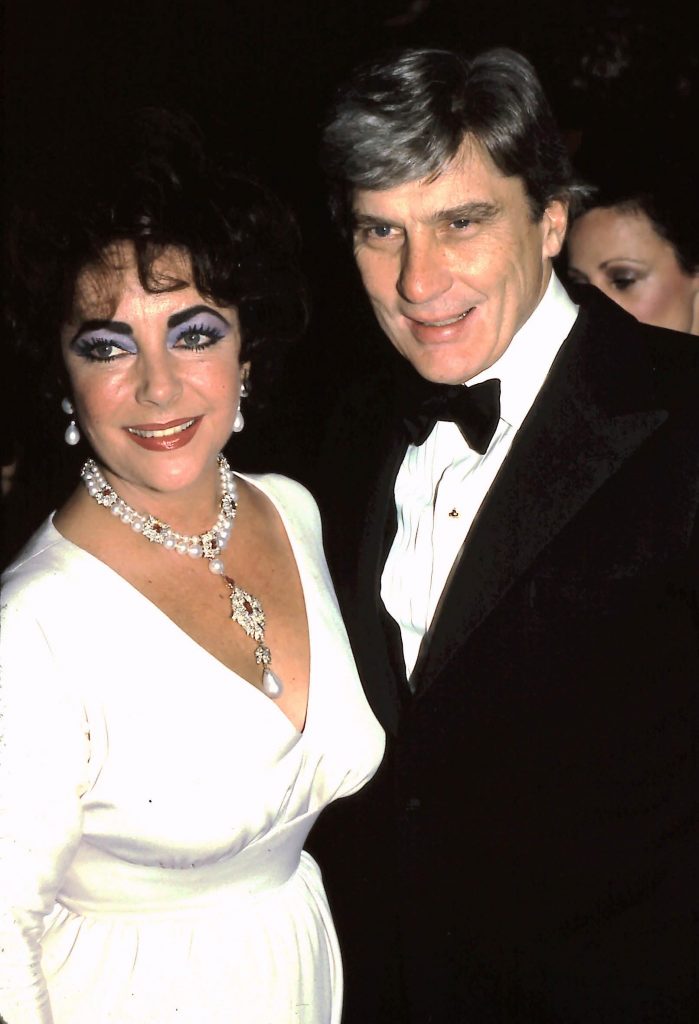 Taylor and Warner at the Xenon opening night bash for The Little Foxes, 1981 (Image by Bob Deutsch) 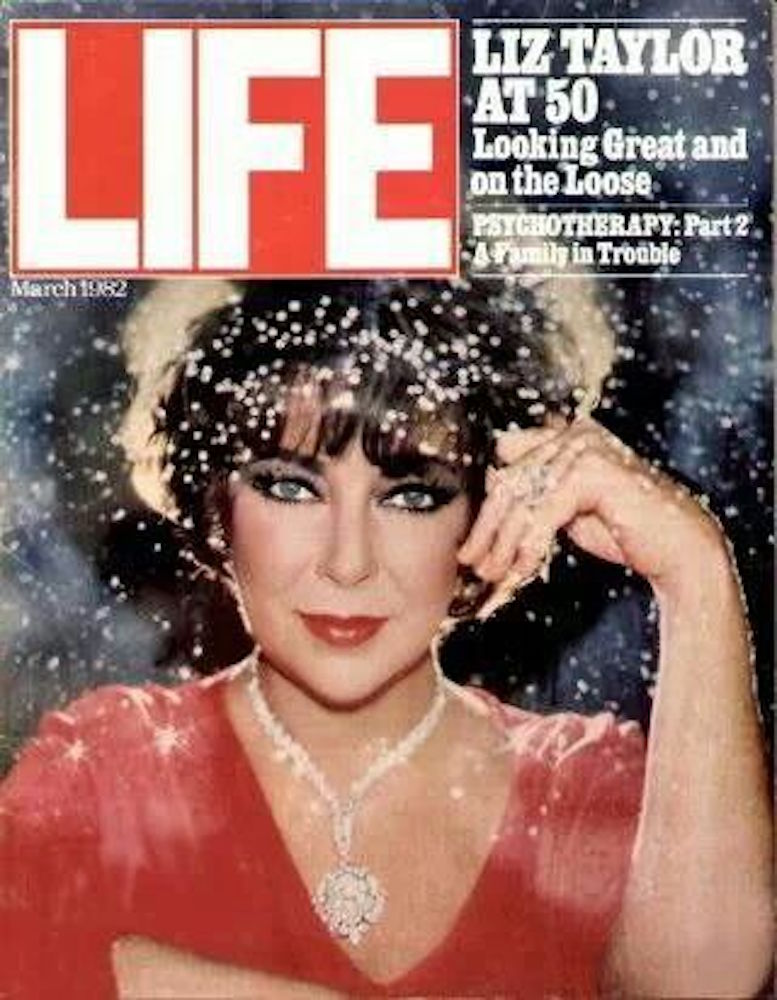 She wound up gaining the weight back while appearing in Private Lives in 1983 with ex-husband (he'd been twice removed!) Richard Burton (1925-1984), so the talk of her weight continued unabated:

In a 1988 New York Times interview, Taylor recalled that she had first packed on the pounds while ensconced in Washington, D.C.:

''I was in a house with books, a television set and two maids who loved to spoil me. And no friends." ... When she reached 180 pounds she stopped weighing herself, but she didn't start dieting. ''I was searching for a replacement for all the things that were making me lonely,'' she said ...

By the time she was speaking with the Times, she had done the impossible and completely reversed her physical decline. With a combination of good surgery, a new attitude (she had divorced Warner in 1982) and healthier eating, Elizabeth Taylor was reborn.

Her September 26, 1984, appearance on the TV series Hotel was a sensation — she had reverted to the glamour queen the world had known 30 years earlier, seeming to have erased the 1970s entirely. She would look fantastic for a good long time.

At a royal reception in 1984, Taylor was said to look "better than ever."

Taylor would fight the battle of the bulge — and far more serious health issues — again, but it was her middle-age spread that so captivated her fans because it was so unexpected from an unearthly beauty. She taught us that we all lose it, and that we can maybe regain it with a lot of effort while we're relatively young ... and probably also taught us not to expect to have it forever no matter how hard we try.

As bitingly funny as Trudeau's observations and barbs from Joan Rivers could be, Taylor in middle age really was still divine after all, no?

The photos in this post are by Bob Deutsch, who as a fan shot hundreds of images of celebrities on the street, outside plays and TV tapings and at events. He went on to become a legit event photographer, and was flown on assignment to shoot some of the most famous people in the world, including, eventually, Elizabeth Taylor.

I'm using his photos for this because I think while they are candids and literal representations of how she looked in her middle age, I love that they are documentary and even affectionate, not deliberately garish or gotcha moments. I think some of Bob's work should be in a museum, and all of it is wonderful and rare.