Today marks the 117th anniversary of the birth of Helen Galagan Douglas, a unique figure in American history, and certainly in movie history.

As Helen Galagan, she was an accomplished operatic singer and stage actress who was said to have never received a bad notice.

Lured to the movies only one time, she picked a doozy, the 1935 sci fi film She, about an eternal beauty ruling over a shangri-la. Gahagan played She Who Must Be Obeyed, a perfect role for a woman so forthright and commanding in her personal life. 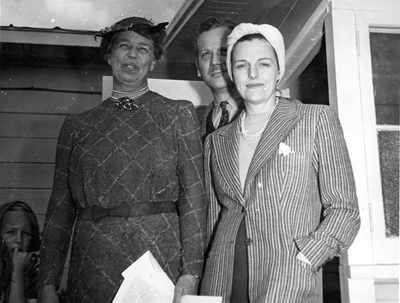 Married to actor Melvyn Douglas (1901-1981), she was a staunch New Deal Democrat who served California in the House of Representatives from 1945-1951. In 1950, she defeated the sitting Democrat in a primary for a U.S. Senate seat, but was felled by Republican opponent Richard M. Nixon in what is considered the birth of this "dirty tricks" campaigning — she was smeared as a Communist sympathizer.

Helen Gahagan Douglas, born 117 years ago today, had some prophetic words about politics and the disbelief in inconvenient facts ... wow!

She had an affair with Lyndon B. Johnson (1908-1973), but lost favor with him when she became an outspoken opponent of the Vietnam War.

When Nixon became embroiled in Watergate, she loudly called for his resignation, leading to an outcropping of bumper stickers and buttons that read: 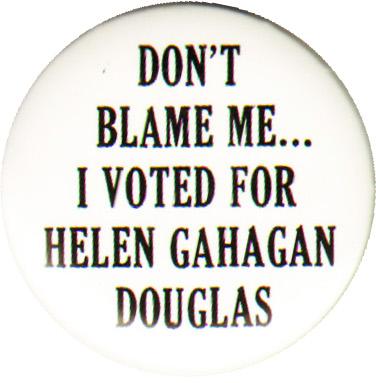 Gahagan Douglas died of cancer in 1980.