Mamie Van Doren, who at 86 is as blonde and as provocative as ever, just trashed Hollywood legend Bob Hope (1903-2003) on her opinionated Facebook page! 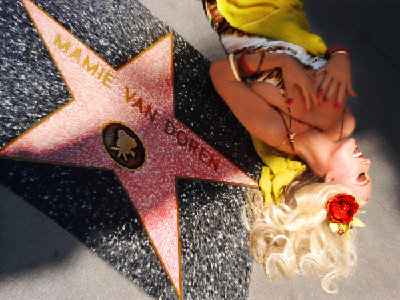 The vixen began by cattily asking, "Does anyone remember Bob Hope?"

Her post quickly got down to business, switching from catty to ferocious, accusing Hope of coming on to her when she was underage:

I was just the right age for Mr Hope....16. Because I turned him down he would never invite me to work with him.

Van Doren went on to disparage Hope's philanthropic reputation, painting a picture of him as both cheap and self-aggrandizing:

Bob Hope made millions of dollars off entertaining the troops. Those tours were sold to NBC. He never did anything for the good of anyone else. He had side pieces tucked away in bungalows all over L.A. He once told Barbara Peyton that she needed a new mattress, and if she didn't get one he wouldn't f*ck her anymore. Miraculously, he paid for it. That said, he was the most tightfisted a**hole in Hollywood. Delores was complicit too. She knew what he was doing and looked the other way. It saved wear and tear on her.

In a final insult, Van Doren cast aspersions on the comedian's talent, writing:

Worst of all, he wasn't funny. He was surrounded by writers all the time, and couldn't be funny without them.

As she herself asked her followers — can you tell she didn't like 'im?