Rick Gets Real on ‘The Bad and the Beautiful’

Vincente Minnelli’s 1952 take on Hollywood, The Bad and the Beautiful, is delicious melodrama. Yet, the movie-making saga doesn’t have the bite of the two show biz tales that came two years before: Sunset Boulevardand All About Eve.

Since this tinsel town takedown was filmed at mega-glam MGM, it’s no surprise that the film focuses more on the beautiful, rather than the infamous bad side of Hollywood.

Still, The Bad and the Beautiful is filled with juicy archetypes based on real show biz types. The two standouts are the leads: Kirk Douglas as Jonathan Shields, a ruthless, David Selznick-style wheeler-dealer producer; and Lana Turner as Georgia Lorrison, a lush starlet haunted by her late legendary father, patterned after Diana Barrymore.

Kirk Douglas hit his ferocious stride in the early ‘50s as this Hollywood heel, with a heart deep down—somewhere around his heels.

Lana Turner has one of her very best roles as the high-strung Hollywood star. While her early scenes as the drunken starlet are depicted as just toned-down Turner, Lana gives a straight-forward performance. Later, as Georgia becomes a star, the latter-day lacquered Lana takes over. I love the insane intro to Lana’s character in her flashback: Turner reclining on a day bed, costumed in a powdered wig, britches, and buckled shoes, as if she’s starring in the MGM version of Hamilton! 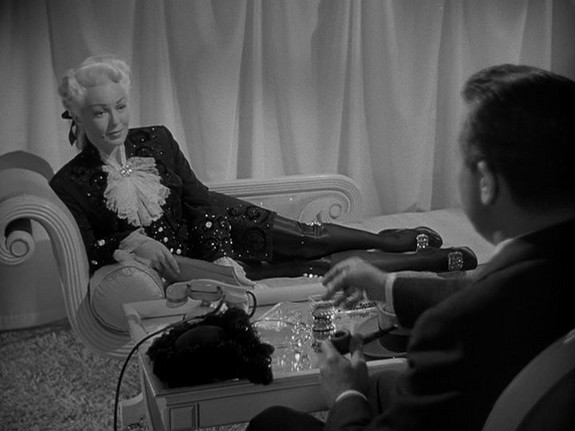 Lana Turner did not do "casual."

The entire cast is fine, with Metro starlet Elaine Stewart (1930-2011) a scene-stealer as Lilah, a bitchy starlet. A curiosity to me is why the great Gloria Grahame (1923-1981) won Best Supporting Actress Oscar for her role as Rosemary. Grahame, as the southern belle wife of writer Dick Powell (1904-1963), doesn’t even appear until the last third of the picture. Gloria’s nearly giddy as the sexy, pesky spouse…but the role pales in comparison to Grahame’s other memorable movie work. And when Rosemary dies, it’s off-camera. Typical off-target Oscar honor, I guess.

Director Vincente Minnelli and cinematographer Robert Surtees (1906-1985) give The Bad and the Beautiful a stylish, virtuoso visual look. Studio life, movie-making, eerie mansions, showbiz parties, and more, are all depicted grandly. Most famous—rightly so—is Lana Turner’s careening car ride, after an ugly confrontation with Douglas. Georgia’s out of control emotions are matched by a sudden rainstorm as she speeds away. The scene climaxes with a hysterical Turner pulling over, collapsing in tears. For those who think that Lana Turner couldn’t act, I say she could—when she chose to.

Considering how many movies have been made about Hollywood, there have are surprisingly few good ones, much less great. As deep dish goes, The Bad and the Beautiful is great as entertainment, but glossy as drama.