Bananarama’s Original Line Up Tour: The Way That They Did It

I've been stoked to see the original Bananarama on the (breathtakingly brief!) North American leg of their Original Line Up Tour ever since tickets went on sale — and they lived up to my expectations. 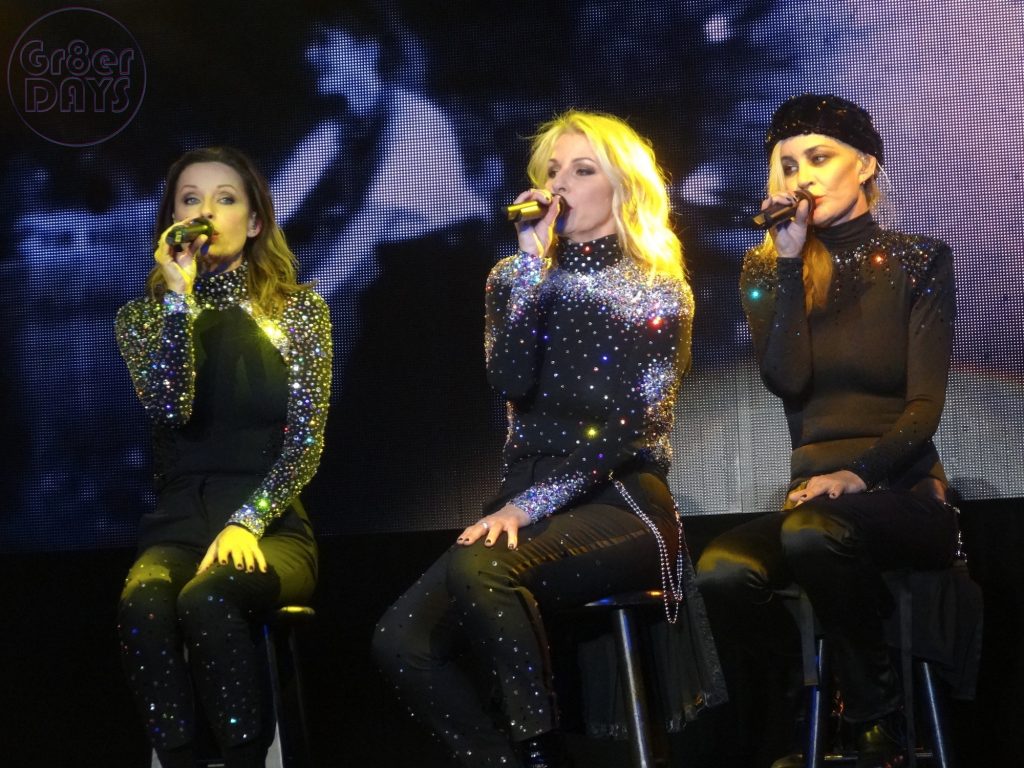 (All images by Matthew Rettenmund)

First, I was fortunate enough to quickly buy a meet-and-greet ticket, which was pricy enough that I thought twice about it, only to later discover that had I hesitated much longer, I'd have been shut out — they offered very, very few of them (maybe 35 or so people?), and some major fanananramas were desolate about missing the opportunity.

And a rare opportunity it was! Not only were Sara Dallin, Keren Woodward and Siobhan Fahey playing New York for the first time ever, they were only playig a handful of U.S. dates.

Before I even touch on the show, I have to say that the PlayStation Theater and the group's management deserve some love in the first degree for running a tight ship and leaving hardcore fans smiling. The instructions on the meet-and-greet were clear and were sent twice; the main venue security guy was joshin' around with fans amiably and made sure everyone got in easily; no autographs were allowed, but we all received solo pre-signed posters from the girls; we weren't bum-rushed through the line (it was quick, but not brusque or rude); the ladies were absolutely sweet; we were all allowed into the venue first, guaranteeing front-row access; and they posted our pictures the same night! (Albeit medium-res images, but hey.) So kudos there. And unlike my nightmare with Blondie, this meet-and-greet employed a decent photographer using — gasp! — flash. 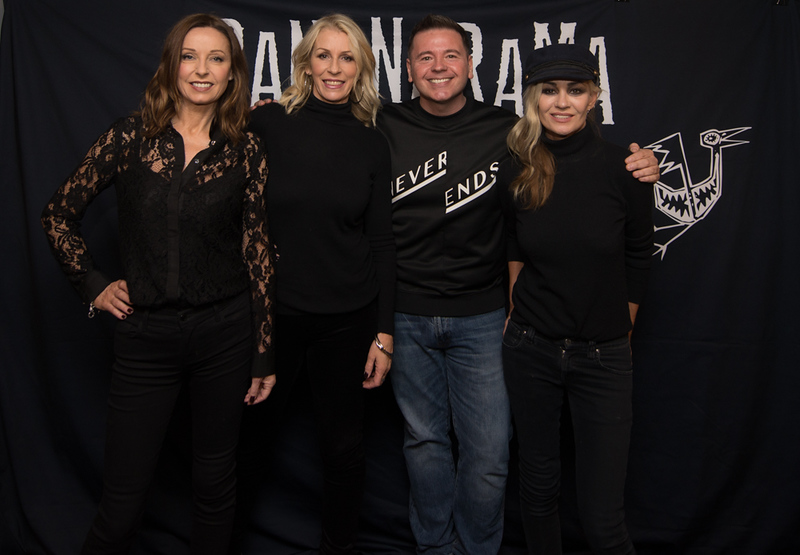 One of my favorite celeb pic-with shots!

When I met the girls, I told them I was very grateful they were doing this tour because I was getting to meet the last of my musical idols in person finally, something I never thought would be possible. "Who were the others?" they asked. They seem to speak as one entity. "Madonna, Pet Shop Boys ..." I began. "Oh, a child of the '80s." As we posed, I joked that I was born in the '90s. They were stunned momentarily, but laughed heartily when I said, "Or rather, the '60s." I told them they all looked beautiful and I couldn't wait for the show, which they thanked me for saying. They really do look lovely, very much the same, and in fine form for taking their show on the road. (Could this tiny tour be a toe-tester?) 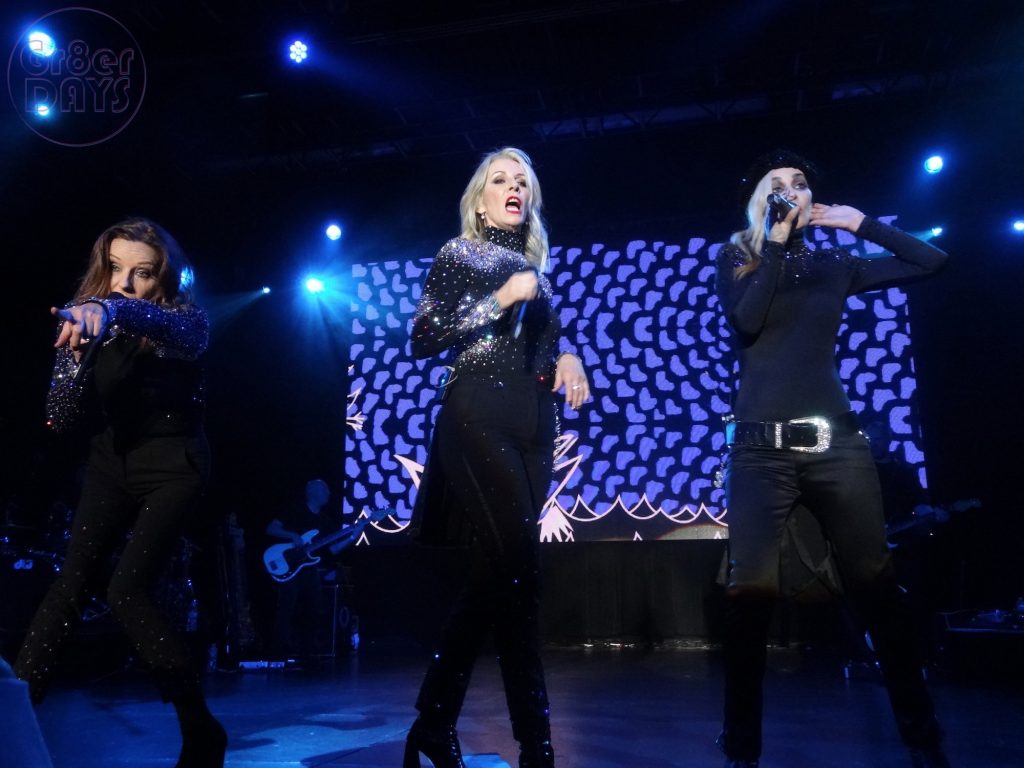 Inside, I was front row near my pals Frank, Rich and others, and happily smashed up against the adorable Marcio, a Brazilian-born fan I keep seeing in meet-and-greet situations. We were both alone, which is stupid — we'll definitely be going together next time. We were able to share fandom nuttery and freak each other out about meeting the girls and what the show would be like. It's funny, he said they sort of scared him (from afar), and I knew what he meant — they're seemingly very nice, but they're so put together and were so post-punk chic it wouldn't be hard to imagine them being sneering mean girls. (They weren't! At all!) 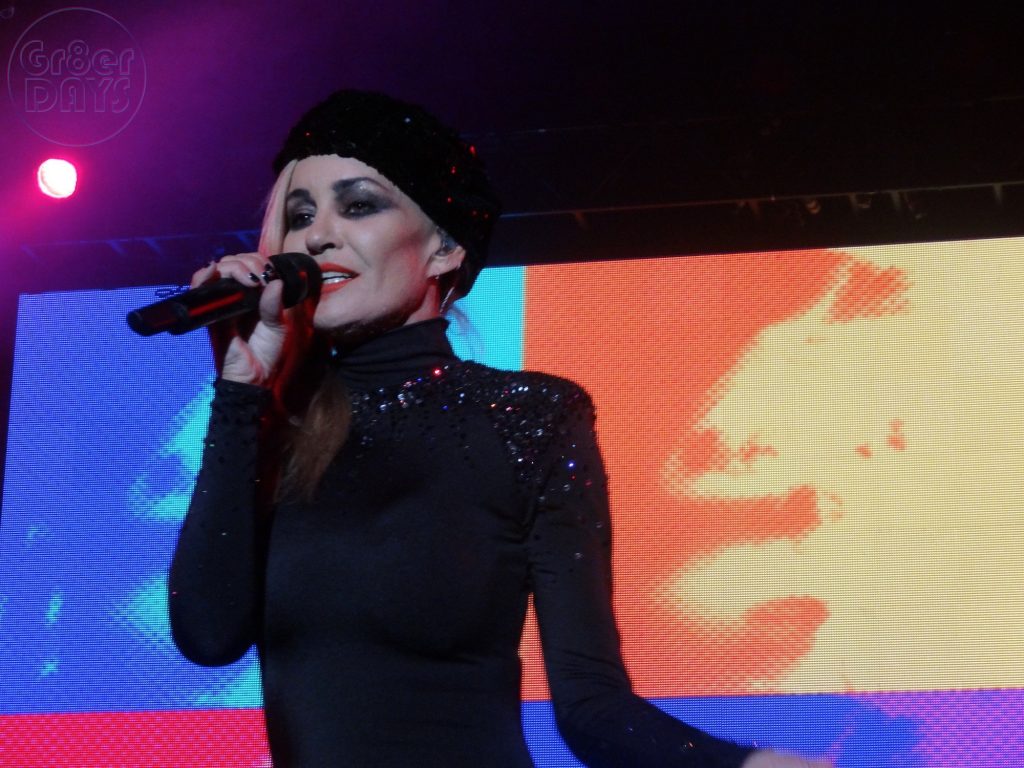 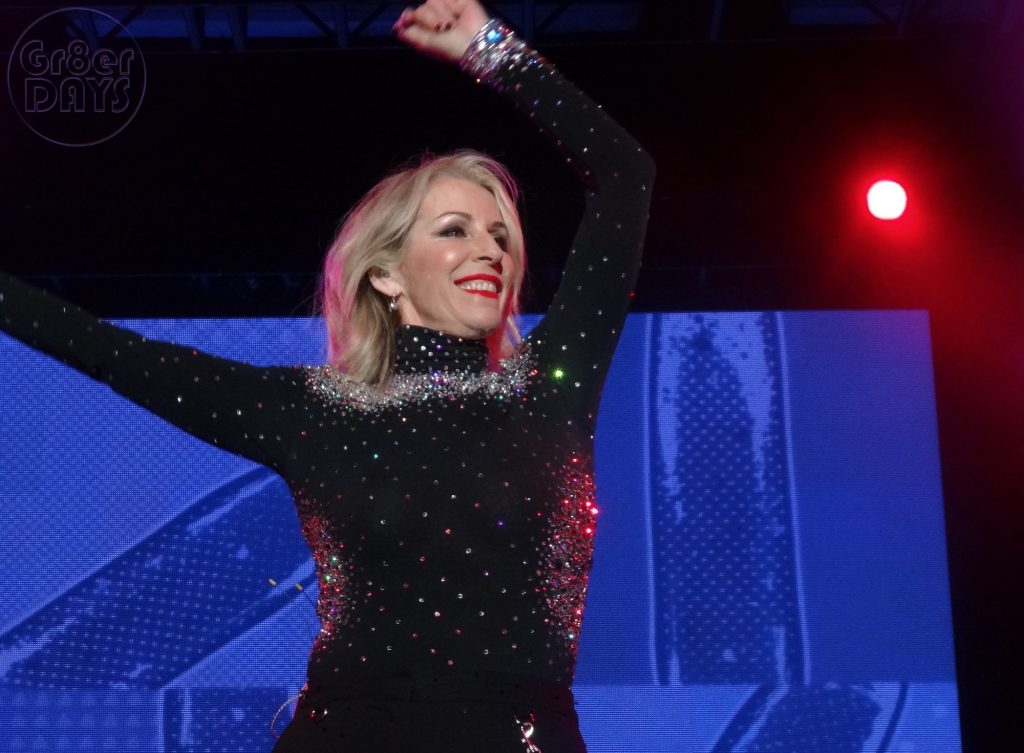 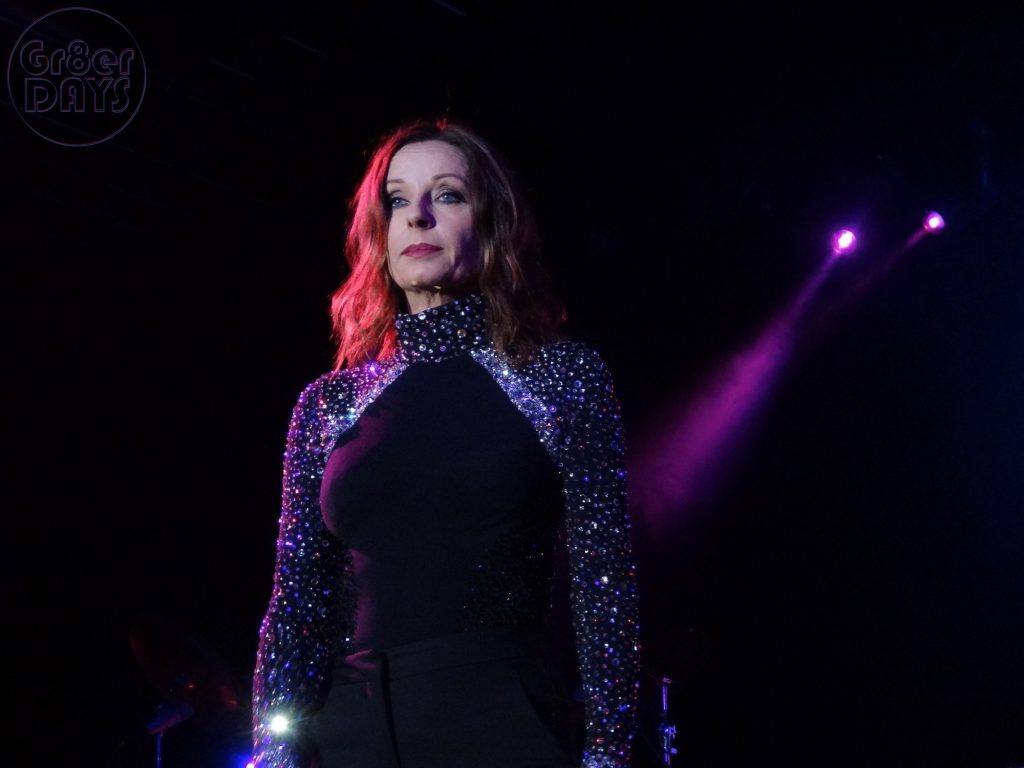 The show was preceded by a DJ that everyone loved, a British chap who played '70s and '80s smashes by mostly American icons (Whitney Houston, Madonna, Shannon — Shannon is an icon, bitch!), all he while dancing with his hands. It was a little camp for me; I felt like I was at a bat mitzvah, to be honest. Also, I wanted it to be livestreamed on Facebook to a roomful of black people so they could watch a roomful of white people and one over-the-top white DJ jamming to Donna Summer, Chaka Khan and Diana Ross.

But I do think he set the tone for the show, which was: Unapologetic nostalgia served with a wink.

The ladies came out after Prince was blasted — a truly misguided entrance gambit, if you ask me — standing in front of a cool screen flashing their iconic name, sending the crowd into a rolling orgasm. 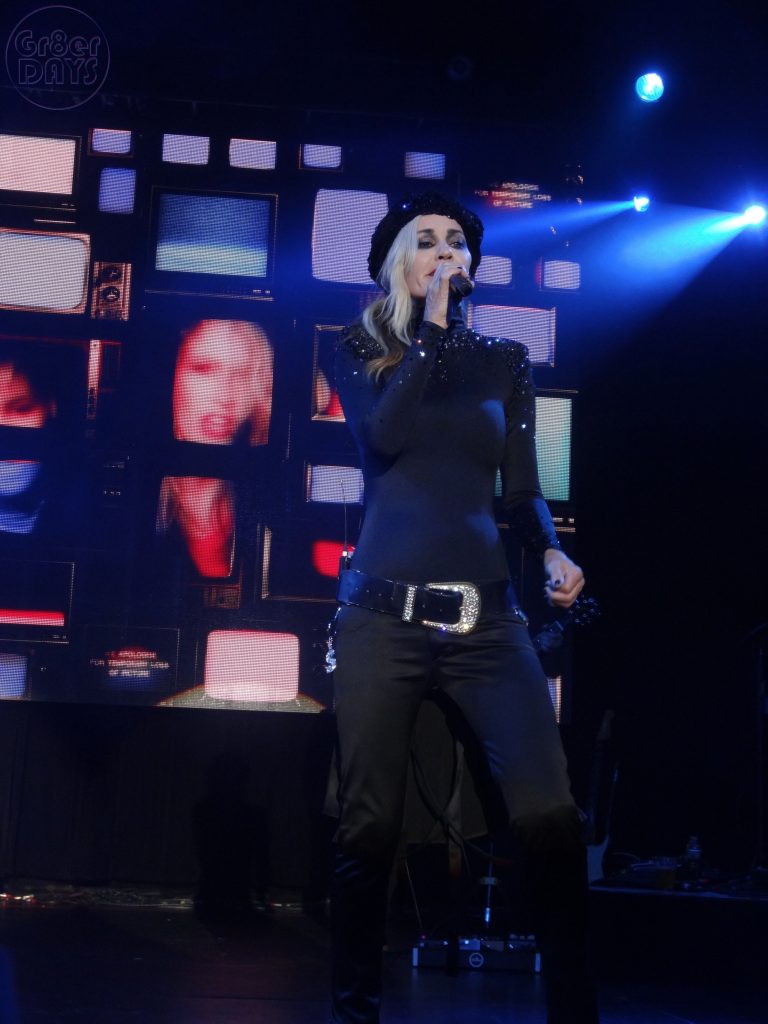 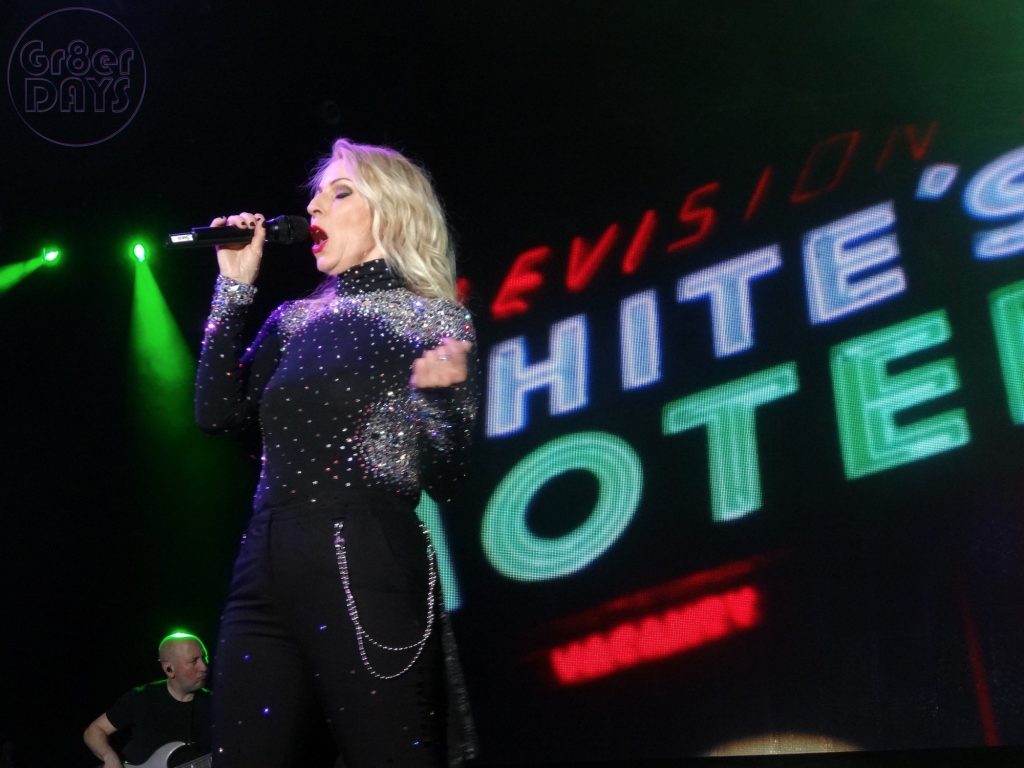 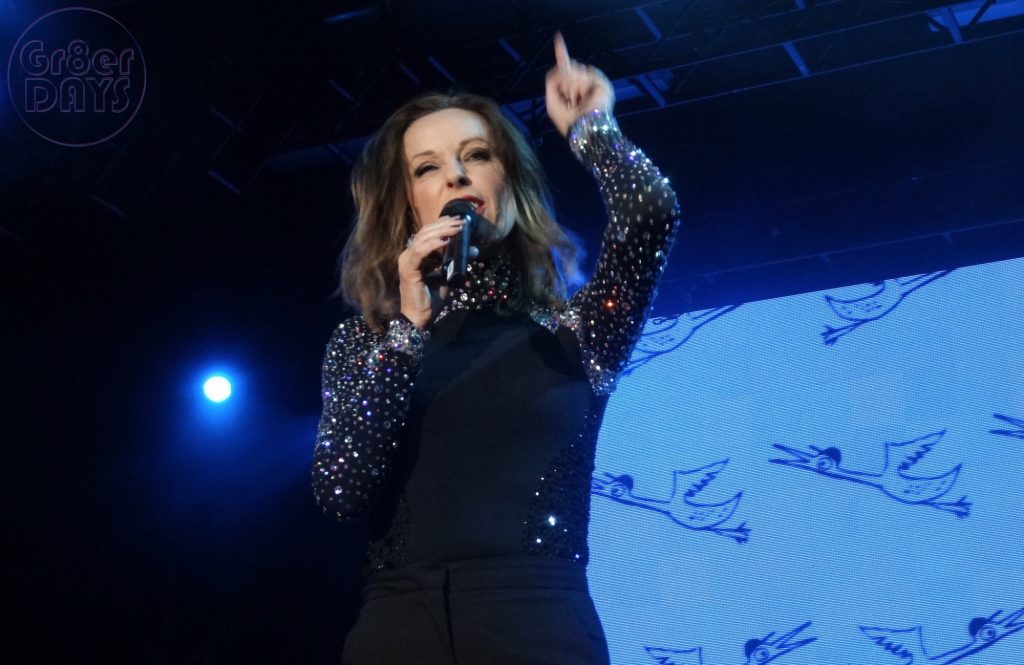 I have to say my only other major criticism of the show was the song on which they chose to enter, their utterly lackluster dud "Nathan Jones" cover from 1988. It just wasn't a great entry song, but I decided they chose it for the lyric "you've been gone too long," in reference to their own long absence from the scene. 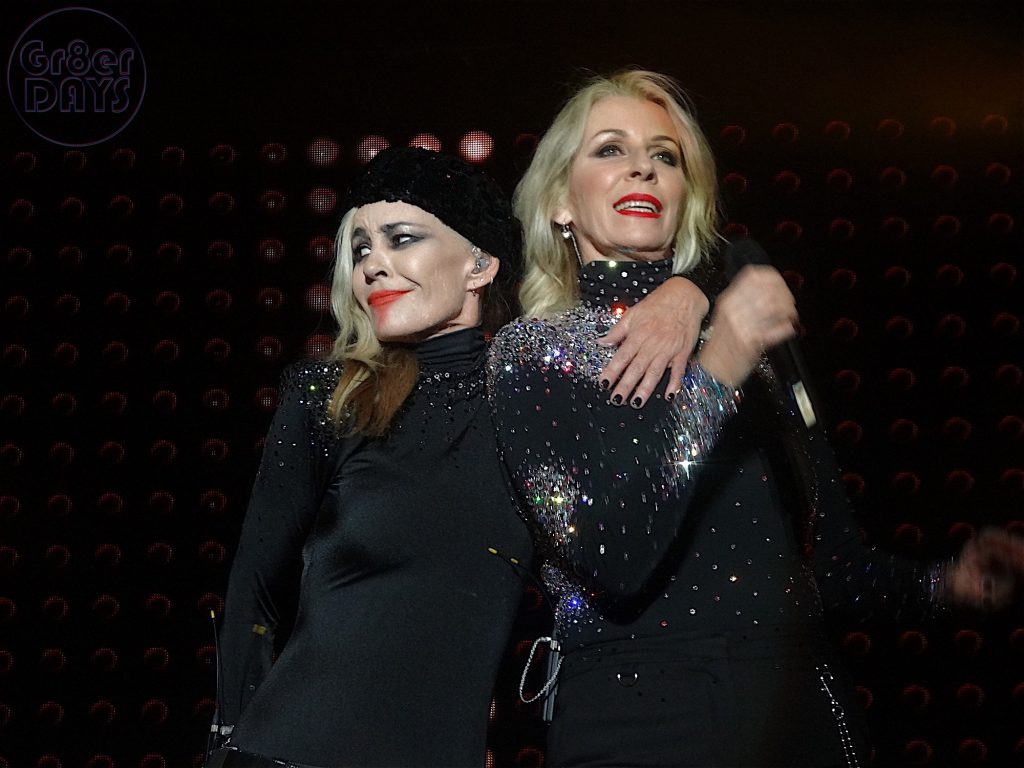 They looked sensational in semi-matchy black, sequinned numbers, with Siobhan seeming the most eager to prove she could still do every cheesy yet effortlessly cool dance move from the past; Sara doing her moves with tongue firmly in cheek, a look on her face that warmly said, "You actually like this, do you?"; and Keren, more often than not, broadly parodying herself whenver it seemed she might come off as too serious. They were all somewhat like that, smiling their way through their loosely choreographed routines as if sharing a secret joke with and about us. 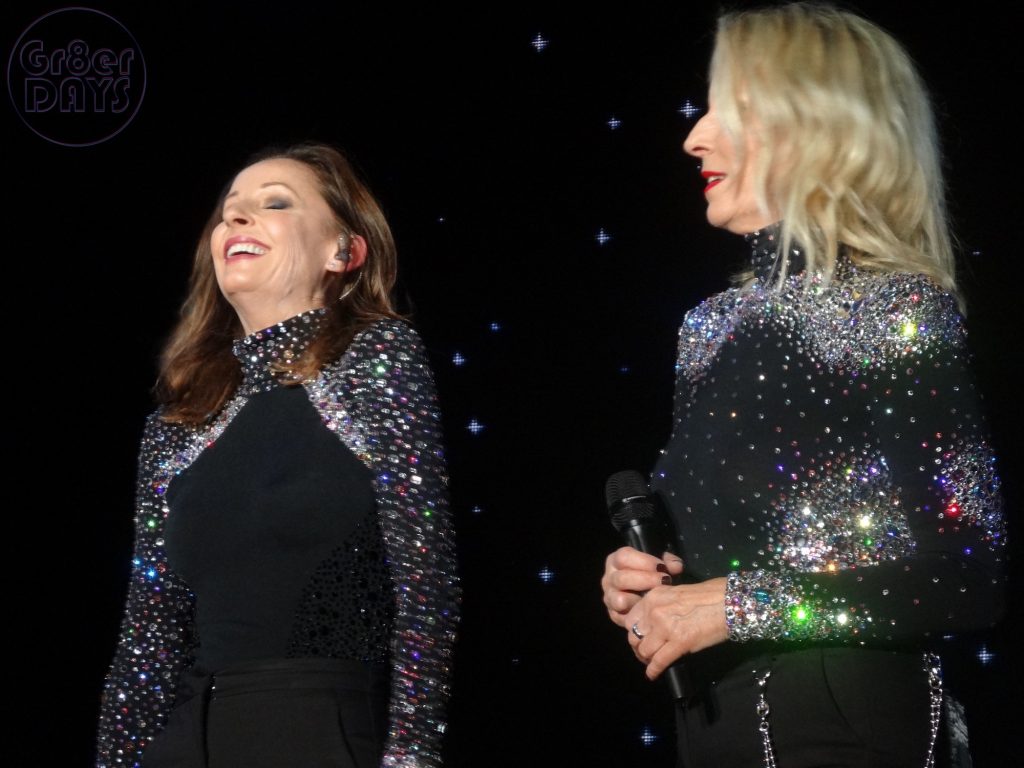 Pop music doesn't have to be a serious affair!

Things picked up immeasurably with "Robert De Niro's Waiting," their unique '84 hit (#95 in the U.S., where even back then De Niro wasn't really the right choice to convey "hunk") that sounds fresher. 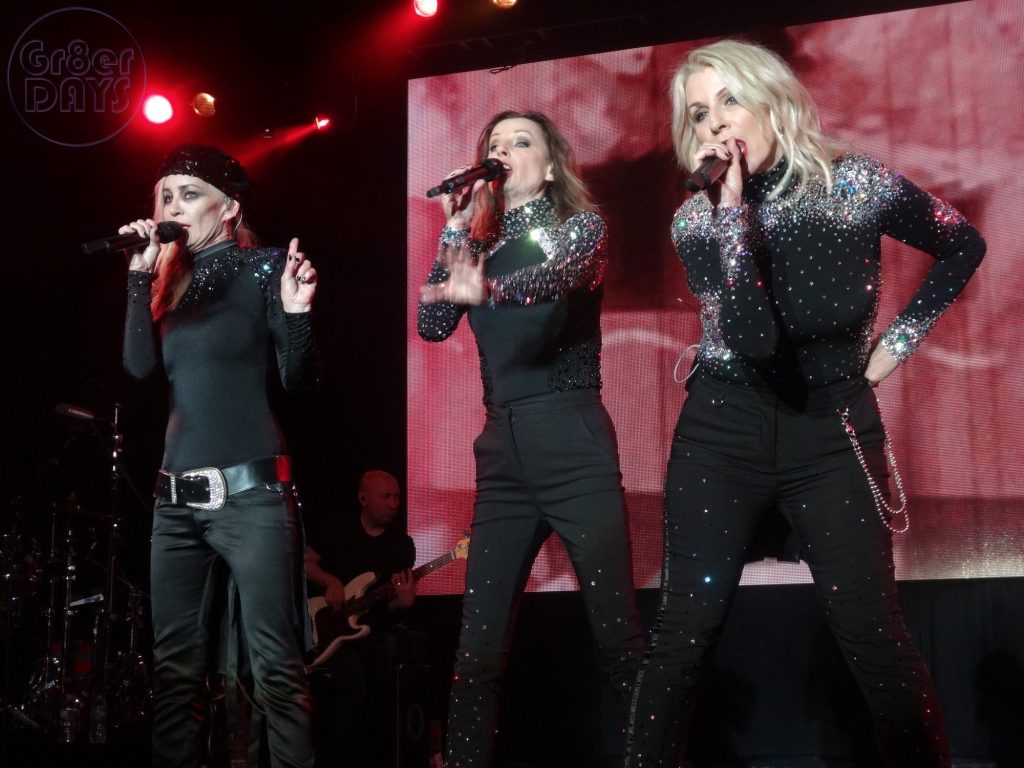 Their set list was actually gold — you couldn't ask for a better one:

"Trick of the Night"

"I Heard a Rumor"

"I Want You Back"

"Love in the First Degree" 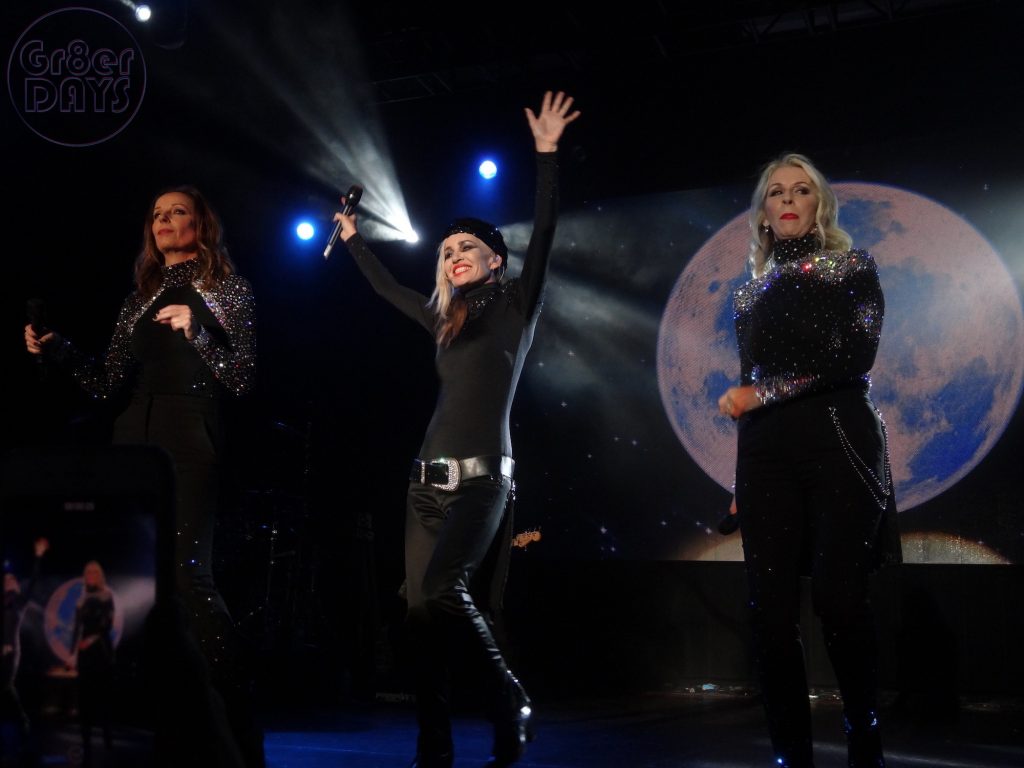 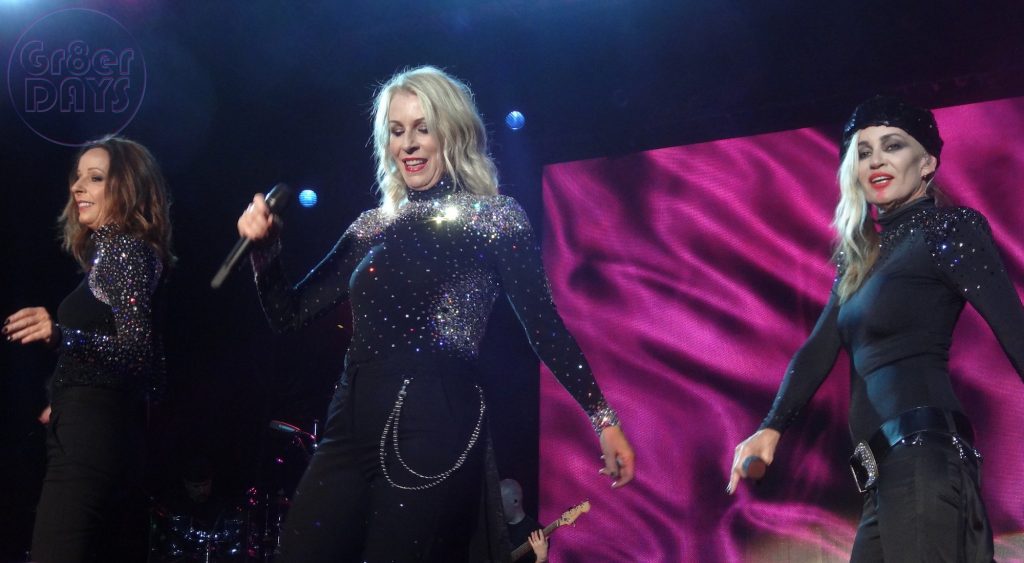 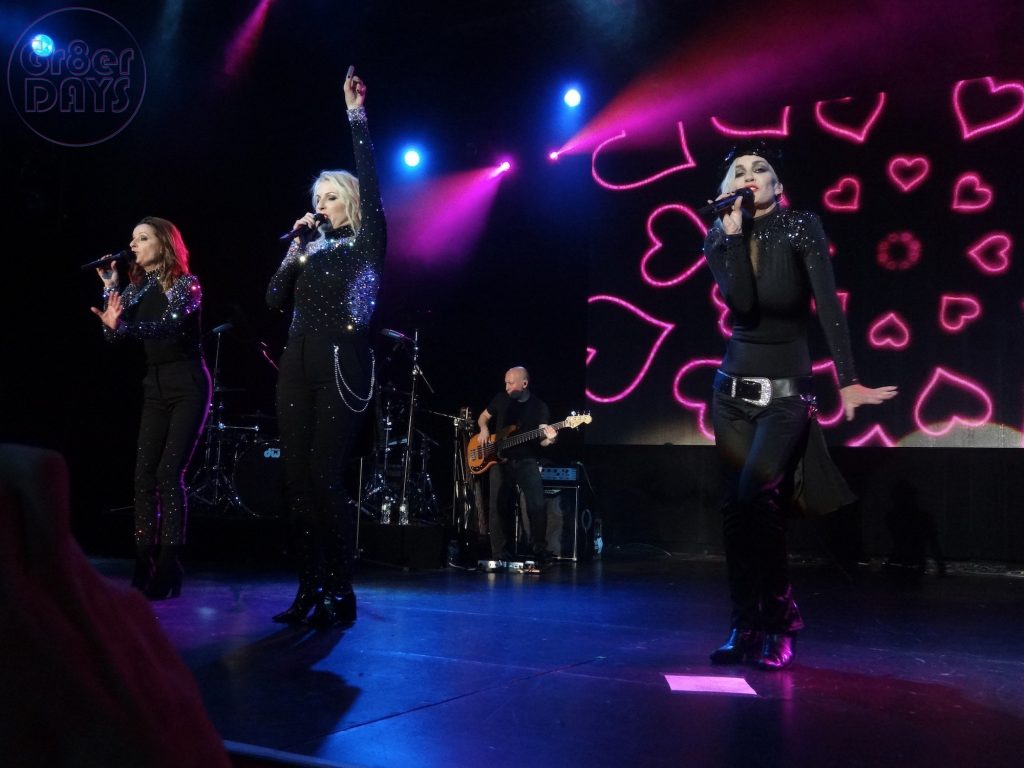 The girls delivered a totally unpretentious track date of an evening, dancing, prancing, prodding each other, mugging and never forgetting to reform center stage for some triptych action.

I felt like their witty deliveries made me think of Keren, 56, and Sara, 56, as the Ab Fab women, with 59-year-old Siobhan — how had intentionally smeared lipstick in a continuation of her Goth girl persona — reminded me of a cross between Jessica Lange and Madonna. (Her black beret and side-to-side shimmy at once point was pure MDNA Tour goodness.) 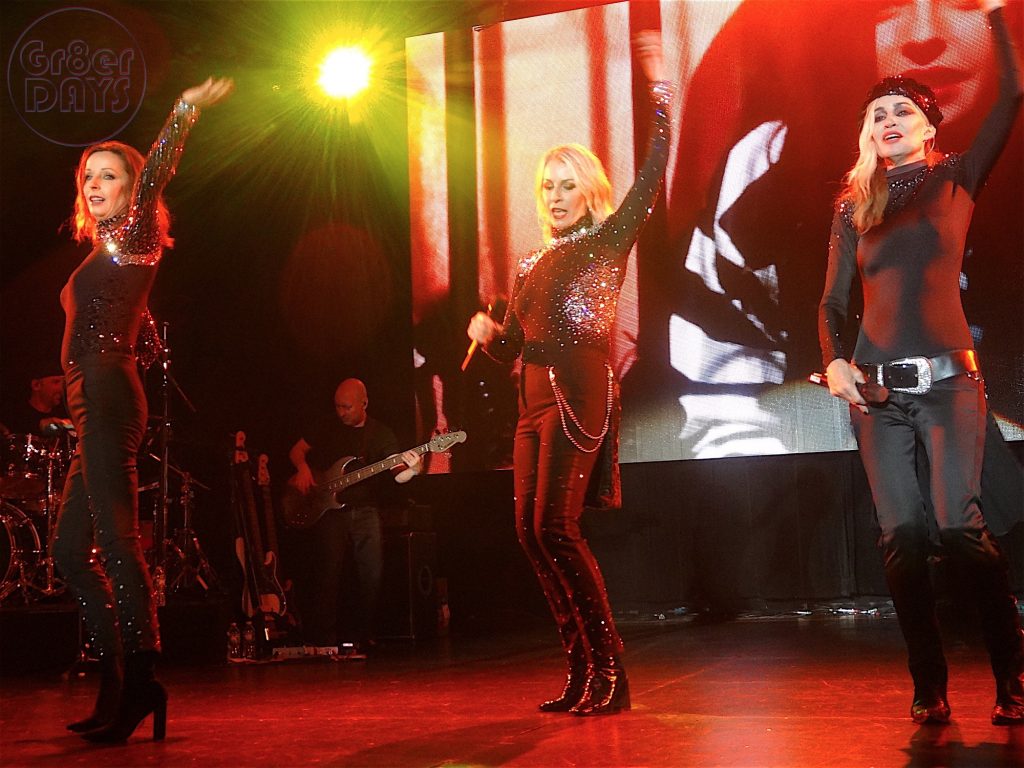 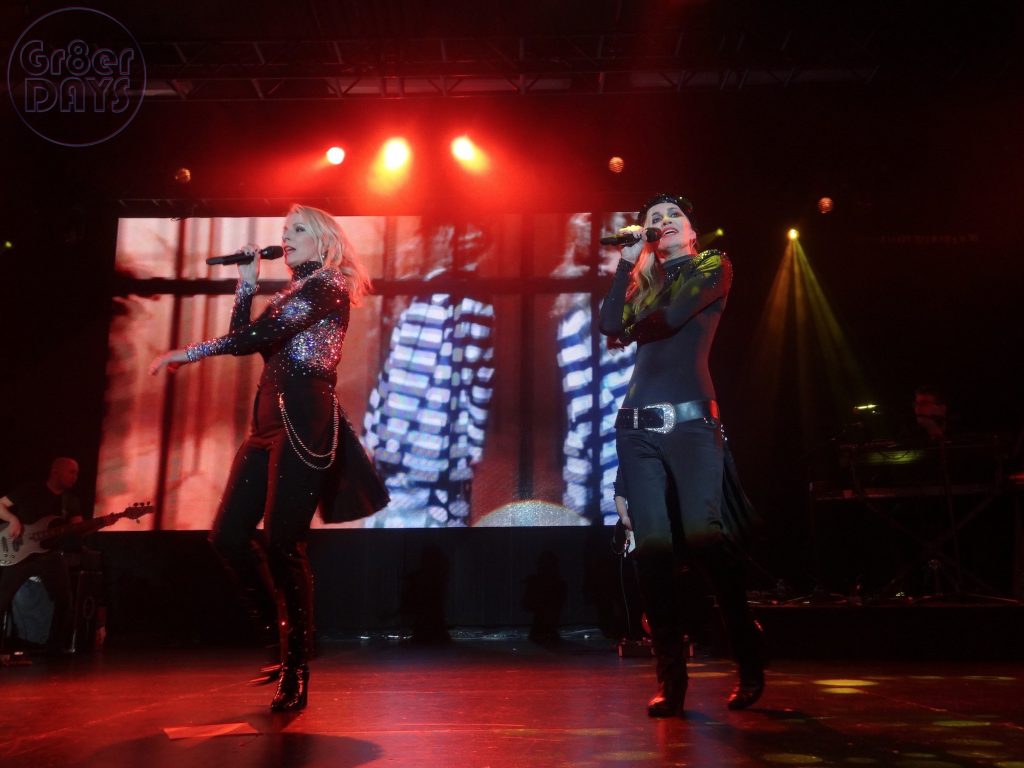 All three are older than Bette Davis was in What Ever Happened to Baby Jane?, and kept joking around about how long ago some of their songs were released, yet while they were generously serving us up what we wanted, a tribute to 1983ish, they did so with vitality that stood (and shimmied) in defiance of outdated perceptions of how old is too old to sing about shy boys.

That said, it was incredibly brave of them to perform in front of — as they did much of the night — projections of their younger selves in vintage music videos.

It was almost alarmingly distracting to me, not because they can't hold up to the comparison, but because at times, as in synch as they were with their twentysomething selves, it felt meta to the point of science fiction: Were these the same people, older ... or astral projections, traveling briefly through time? That's the kind of visual that can make you deconstruct how you've spent the last 35 years yourself! 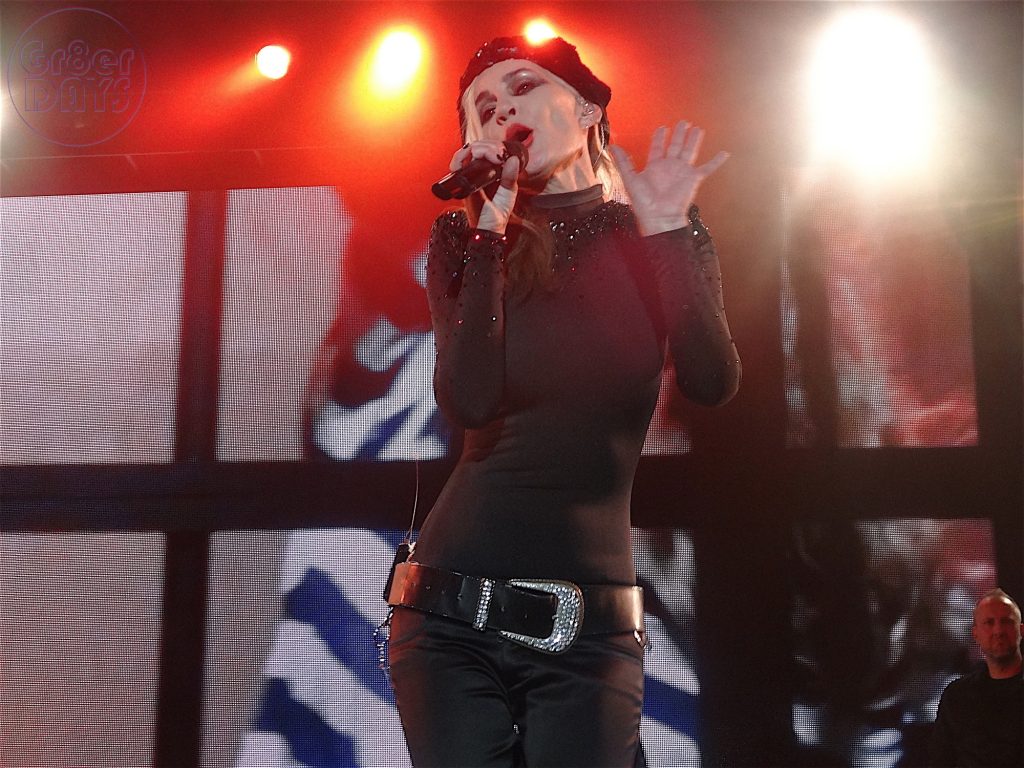 In the end, they put on a vibrant, crowd-pleasing show, and stopped to pose with and sign for fans outside when it was all over. The rarity of the outing made it feel all the more magical, like we'd all bathed in that Cocoon (1985) pool — and made me hope they will decide to grace the States with their presence again soon, hopefully bearing new music as well as old.