Mercurial avant-garde singer, actress and model Grace Jones, who turns 70 next month, appeared at a Q&A held after a Film Society of Lincoln Center screening of the documentary Grace Jones: Bloodlight and Bami Saturday evening, finally having unleashed the film on the world after beginning work on it with director Sophie Fiennes in 2005. 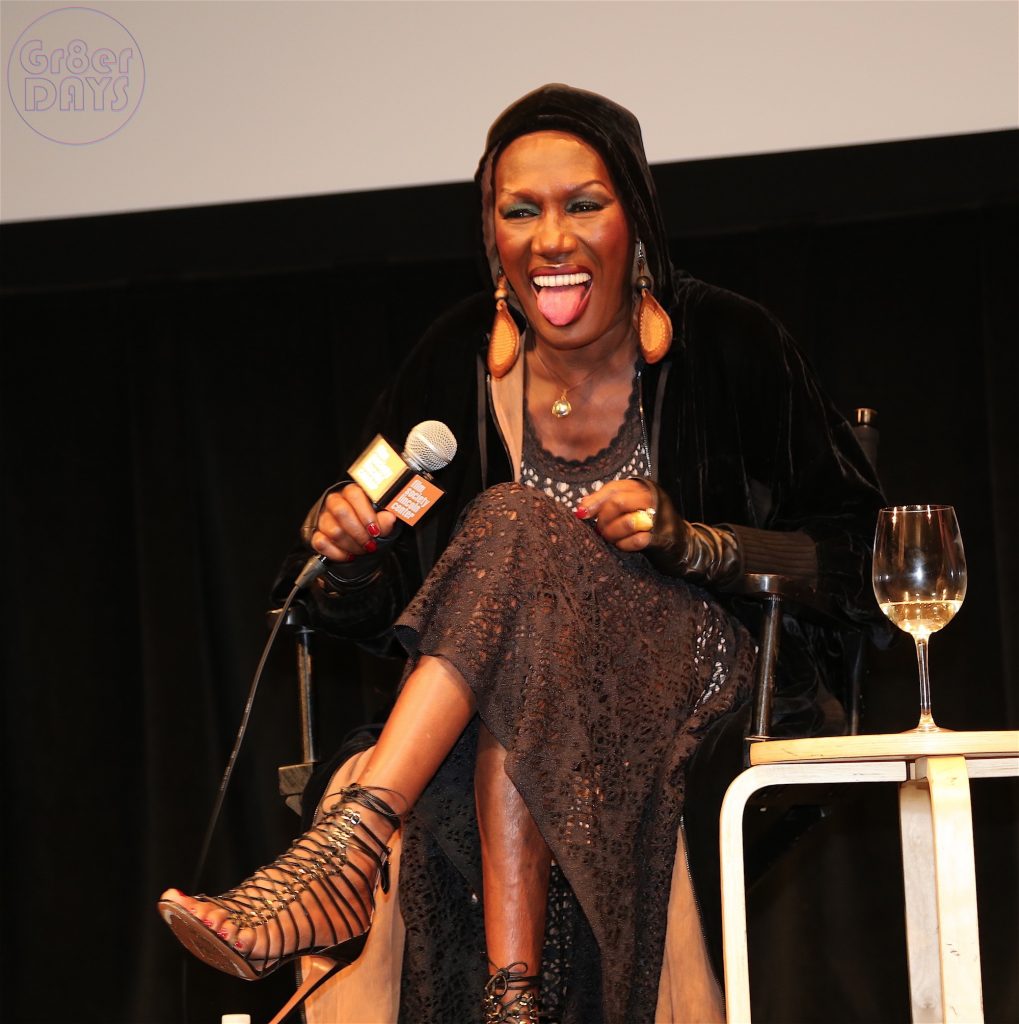 Jones was loving her front-row fans. (All images by Matthew Rettenmund)

Looking every inch the international superstar she has been for more than 40 years, a hooded Jones arrived with a police escort and playful shades, taking a seat between moderator Piotr Orlov of NPR and Fiennes, and proceeding to more than live up to the rabid crowd's expectations. 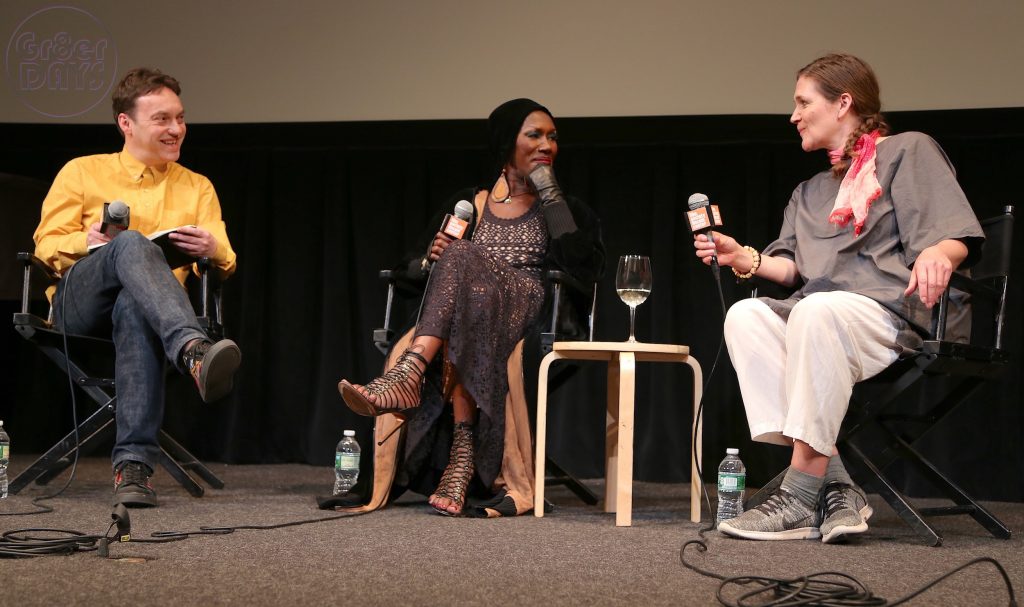 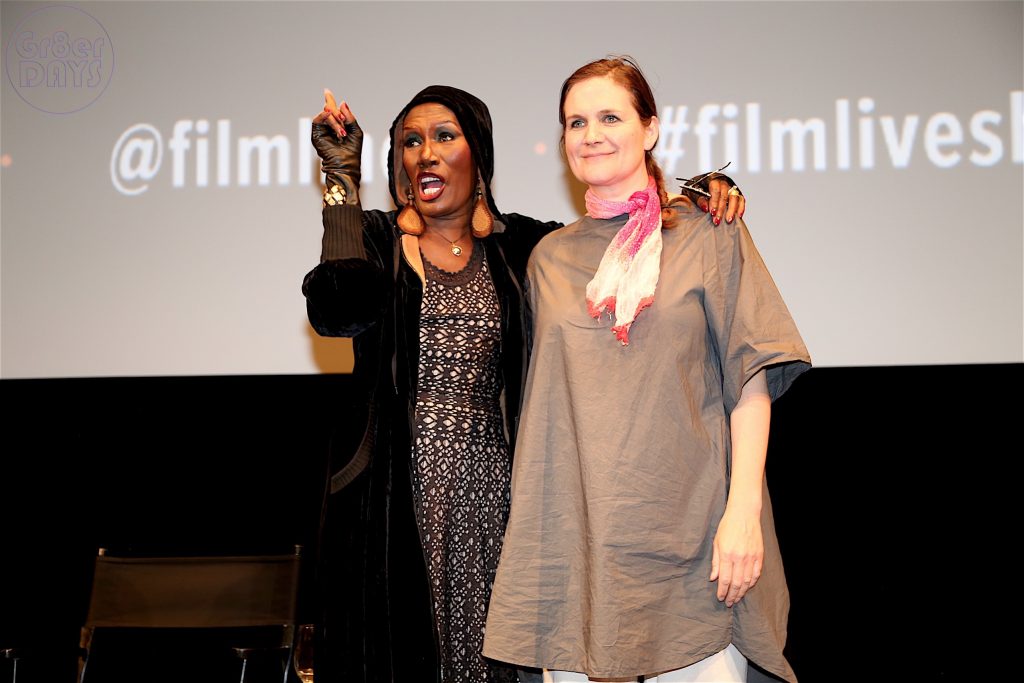 Joking about her poor memory, she was the butt of a joke about her legendary tardiness, collapsing into her seat with one leg extended before regaining her composure in order to point out that she'd arrived first that particular evening. She spoke affectionately of the film, and of Fiennes, whom she referred to as being "like family" from the moment they met over a decade ago. 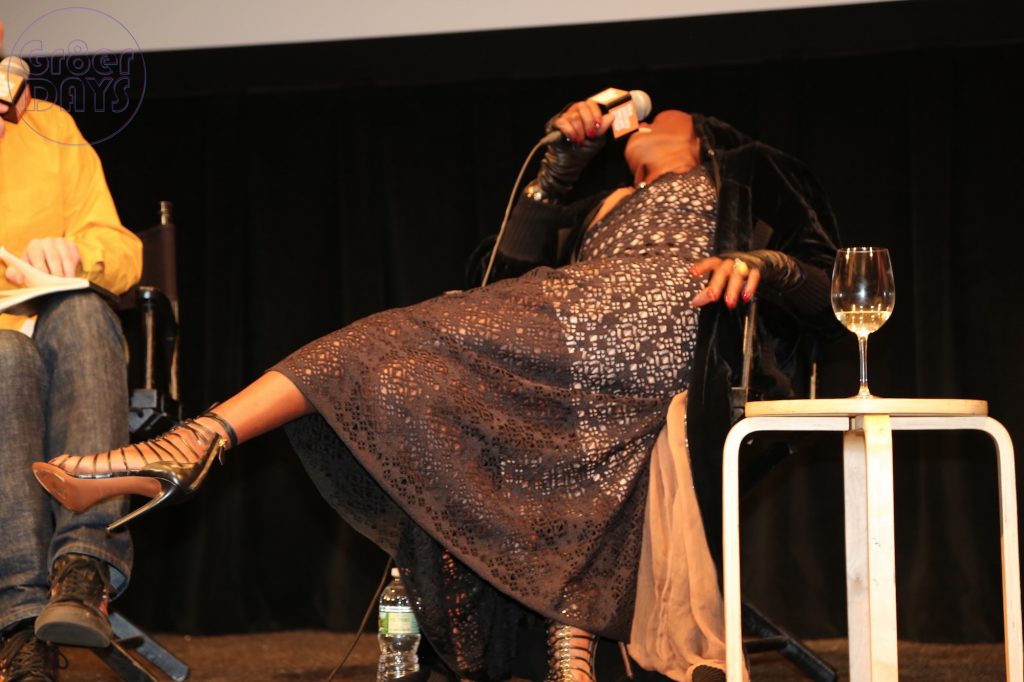 The legs were a co-star of the evening!

Fiennes, 51, the sister of Joseph, 47, and Ralph, 55, called Jones the ultimate visual artist, and used her as an example of a person who is a natural onstage, a compliment that pleased Jones, who winked at the audience and who seemed to silently — but firmly — agree.

At one point, Jones, in pointing out that Fiennes had had a baby during the shoot, one of many reasons the film took so long to complete, went into mock labor for her fans. 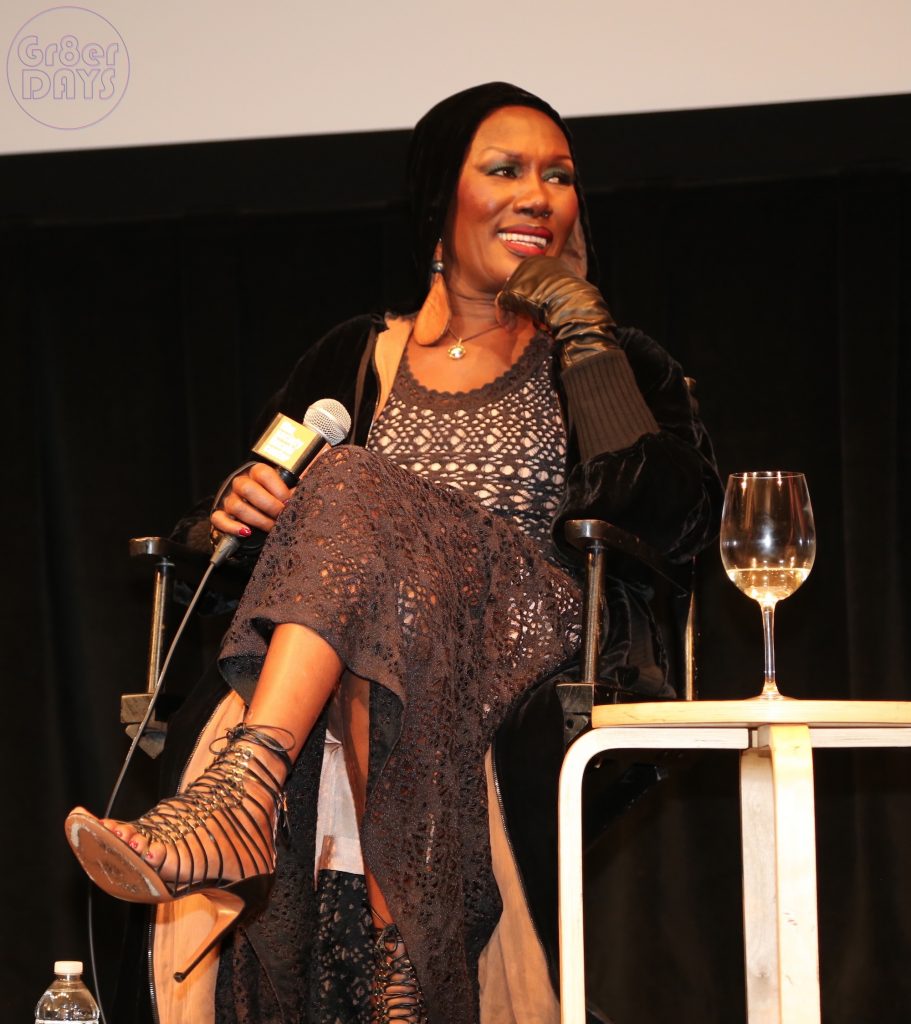 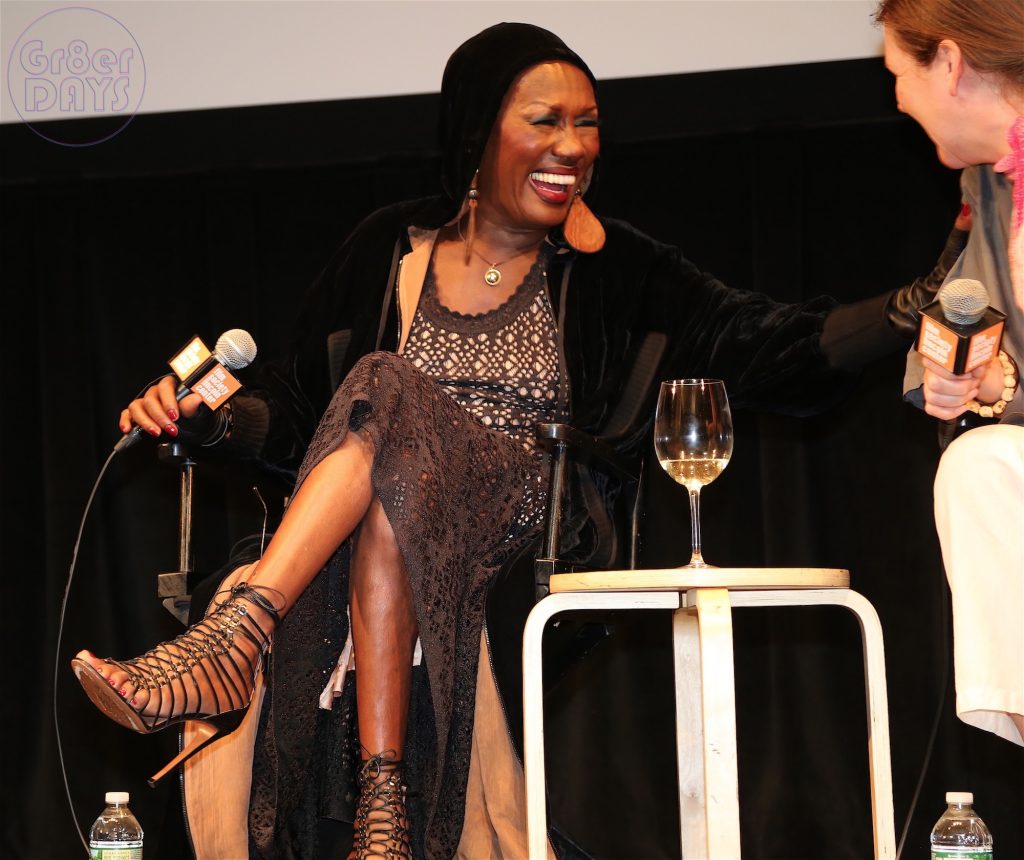 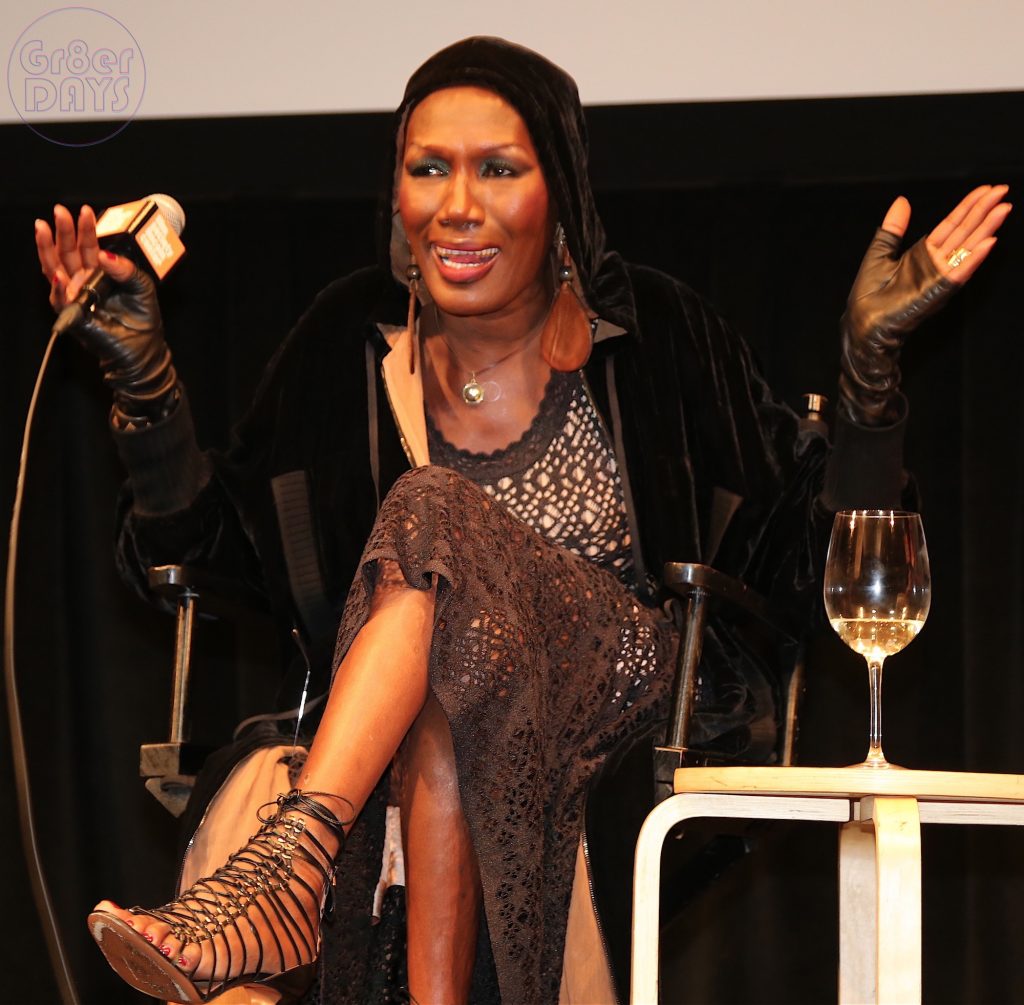 It may have taken 13 years to come out, but her doc hit the spot for Jones.

Jones also recalled the time she turned down Blade Runner (1982), playfully noting that director Ridley Scott (b. 1937), "Never called me back. He just hired girls who looked like me."

Grace Jones: Bloodlight and Bami is a meandering concert film with generous, low-tech-looking, yet strangely poetic dives into Jones's personal life, including startlingly earthy scenes of her and her extended family in Jamaica. With no makeup and no costumes, Jones is just another older woman reminiscing about the good times and bad times in her past, greedily gobbling up oysters and pork, drinking in the natural beauty of her home country, and holding her first grandchild.

It is eye-opening to see Jones — so often presented as robotic or mannequin-like to the point of inciting fear — as a flesh-and-blood woman. 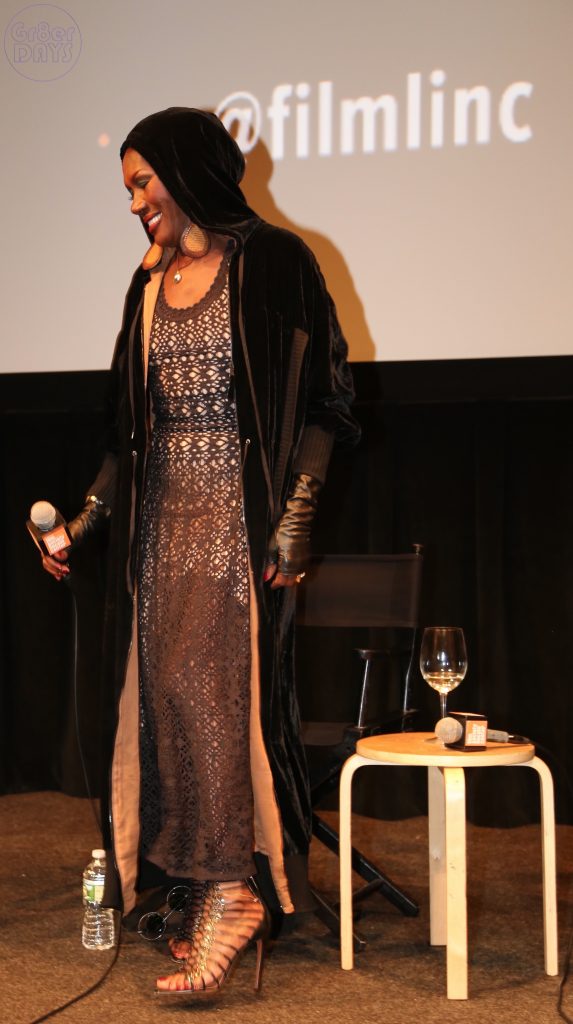 The fashion icon, head to toe

But as  appealingly low-maintenance as she is in these scenes, there is no denying the pleasures of watching her go off on wayward musicians and bark on the phone over late contracts in other scenes that find her struggling to put an album together, and to globe-trot without hitting potholes.

The Grace Jones in this documentary isn't exactly warm and cuddly, but she's not emotionally impenetrable, either. Best of all, she's never not witty nor is she ever far away from a profane remark, such as when prying open an oyster she marvels at its tightness — and bluntly wishes aloud she could say the same of herself. 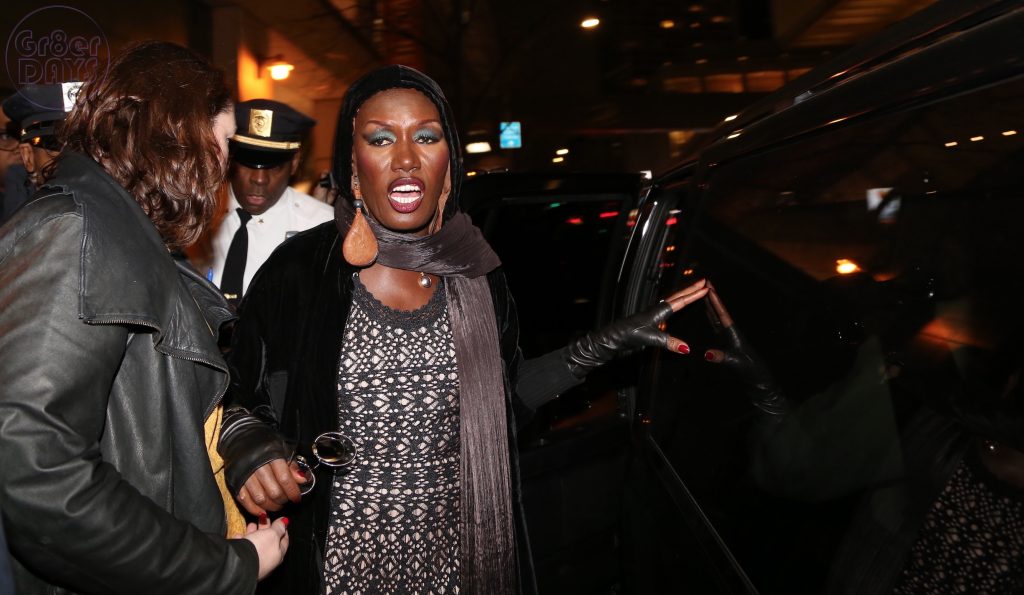 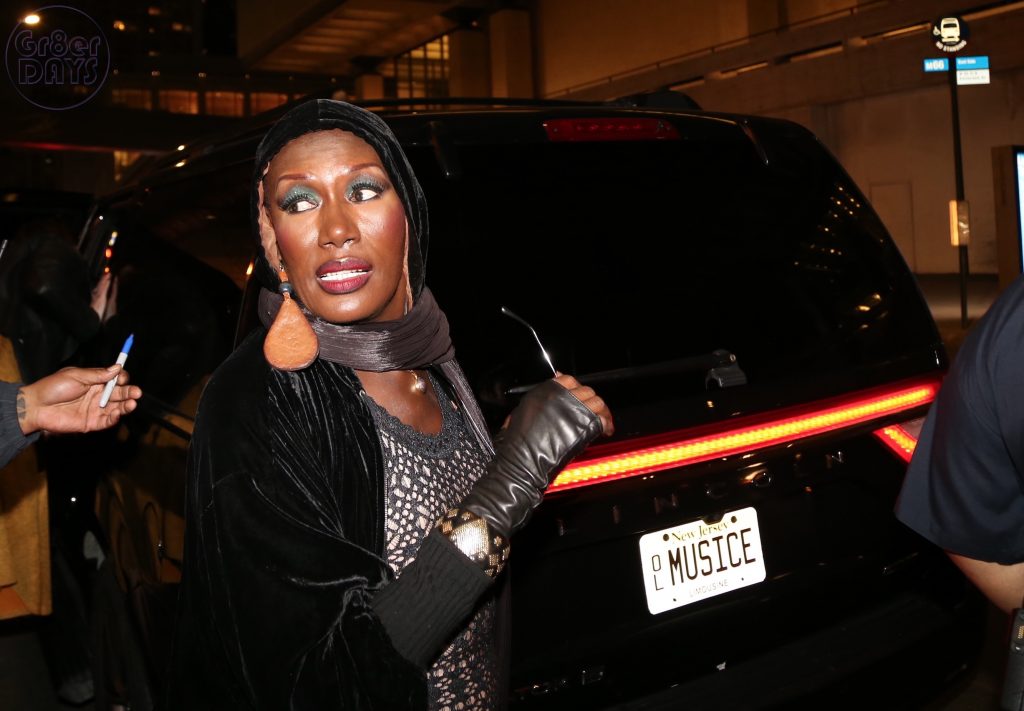 At the end of the Q&A, Jones took her bows with her moderator and director, then was whisked off to do another for Metrograph downtown, but not before granting the wishes of a few dozen fans outside, impatiently allowing selfies ("A selfie? I hate selfies!") and agreeing to sign one item per person, revolving between generous and brittle. "Don't do that," she told one fan who grabbed her. "I'm a boxer." Just as she'd said in the film, she never strikes "without a warning," contrary to the impression given back when she decked British presenter Russell Harty (1934-1988) on live TV in the early '80s.

"I give a warning," Jones purred in her doc. Be careful not to miss the warning.