Carole Cook Is ‘Back Where She Belongs’

Carole Cook is becoming forgetful — oh, she remembers everything that ever happened to her in her 94 years, and she remembered all the snappy one-liners in her wildly successful, two-night run at 54 Below in NYC June 19-20, but there is no arguing that the woman has simply forgotten to age. 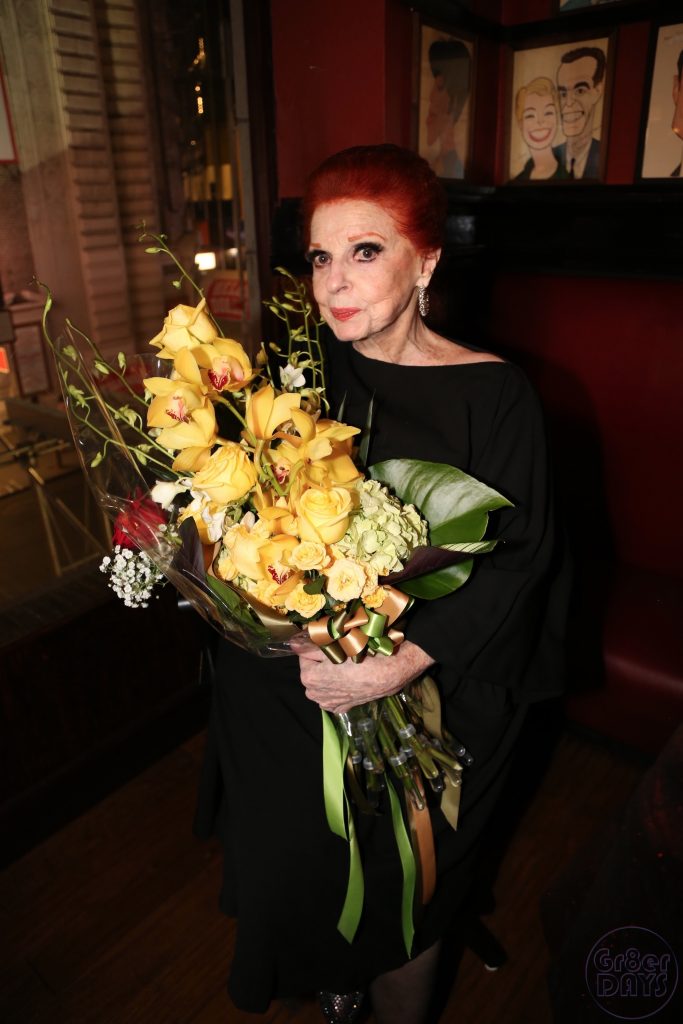 "Oh, to be 90 again!" Cook quipped. (All images by Matthew Rettenmund)

Making her cabaret debut in Back Where She Belongs: The Life and Times of Carole Cook, the flame-haired veteran of stage and screen looked elegant in black and — in what is the highest compliment for a performer who was working before most people owned TVs — completely like Carole Cook. Her appearance was a big part of her act the night I saw her, leading to several Joan Rivers moments of self-reflection and giving her show a sardonic, pre-feminist, feminist tilt. 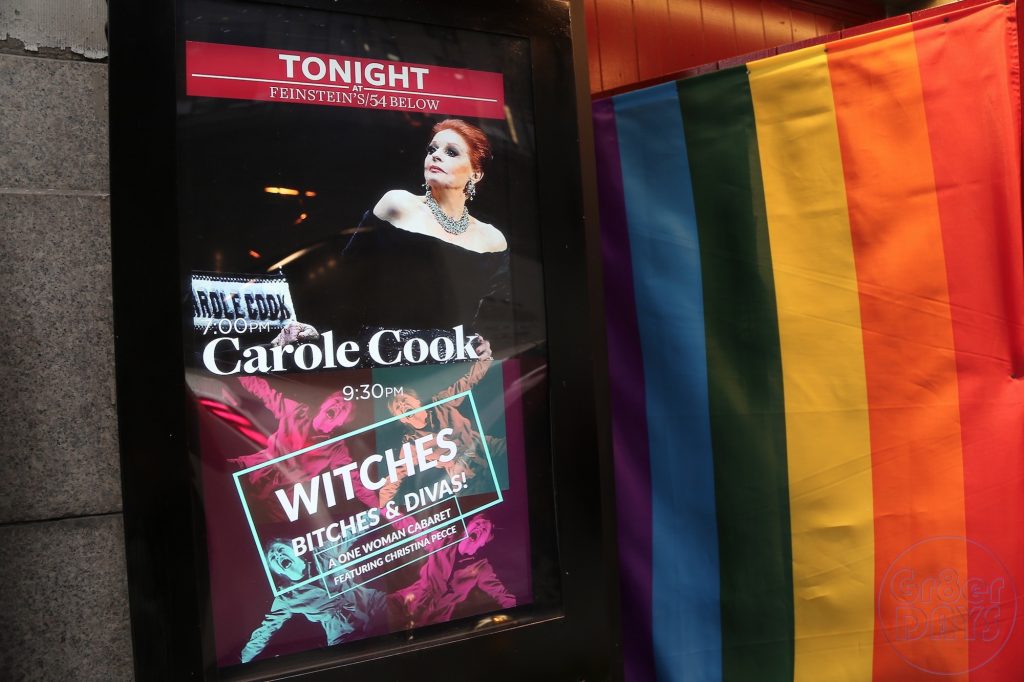 "I was always so proud of how good I looked for my age," she bragged before admitting, "Then I realized I was just going blind." 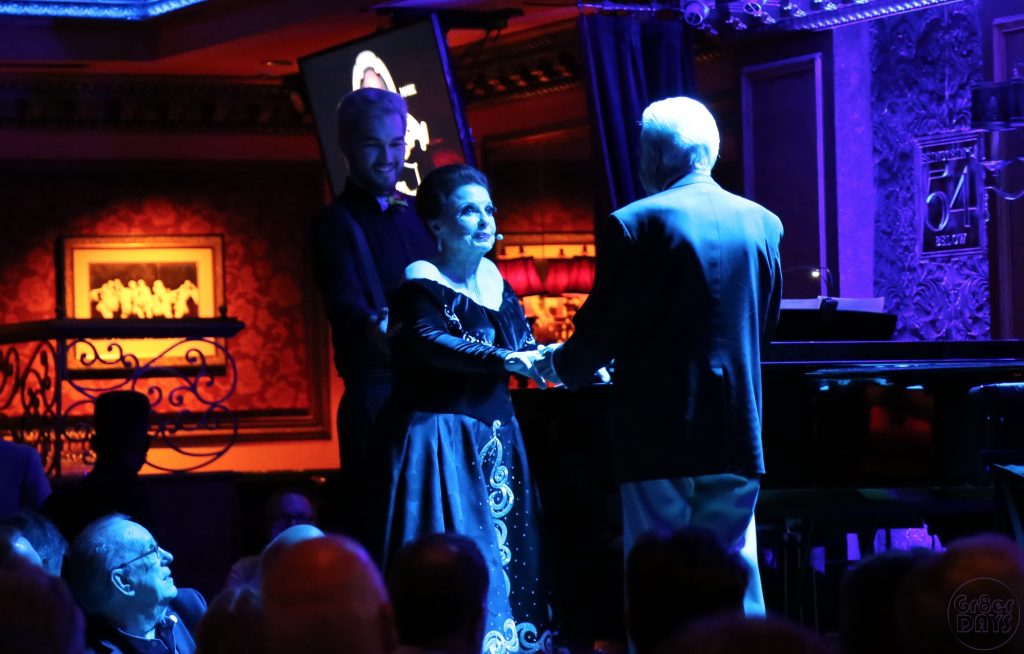 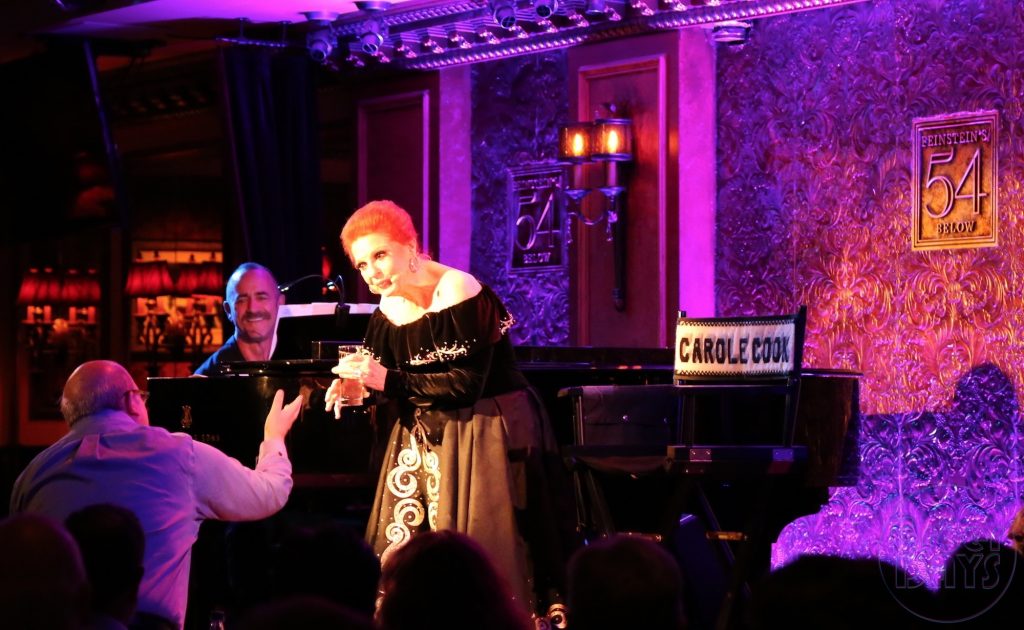 With a verbal wink and her inimitable double-takes (a lost art!). she related how her mother had fawned over her gorgeous sisters but had told Cook she was "unique," a story that made her instantly relatable and vulnerable, even as she confidently rattled off Bruce Vilanch-adjacent jokes with Charles Pierce punch, all while serving old-school Arlene Dahl glamour. 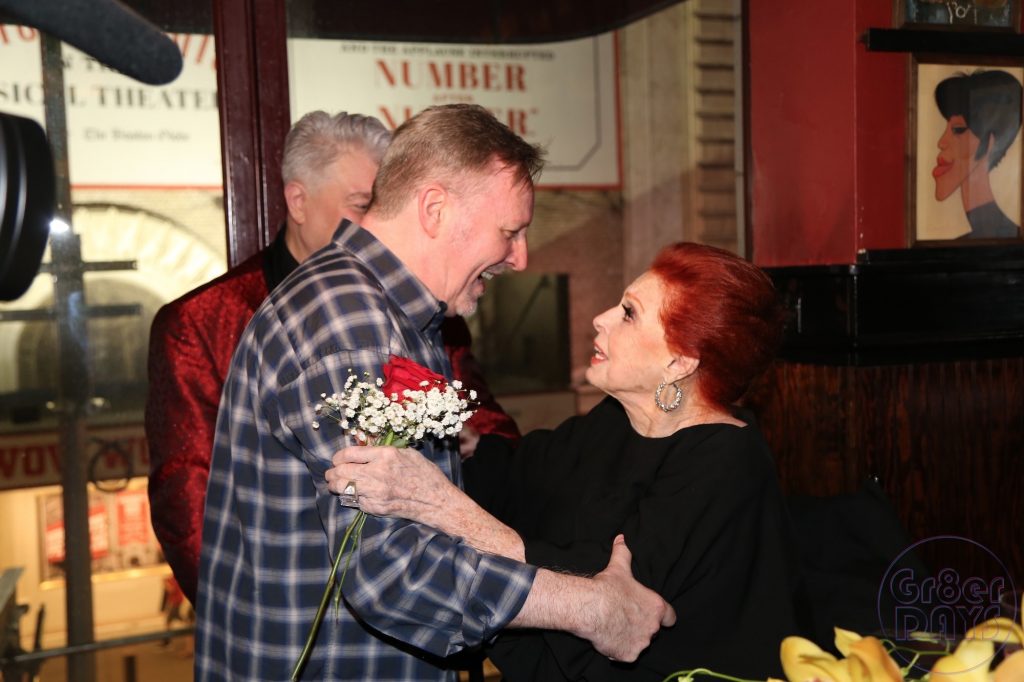 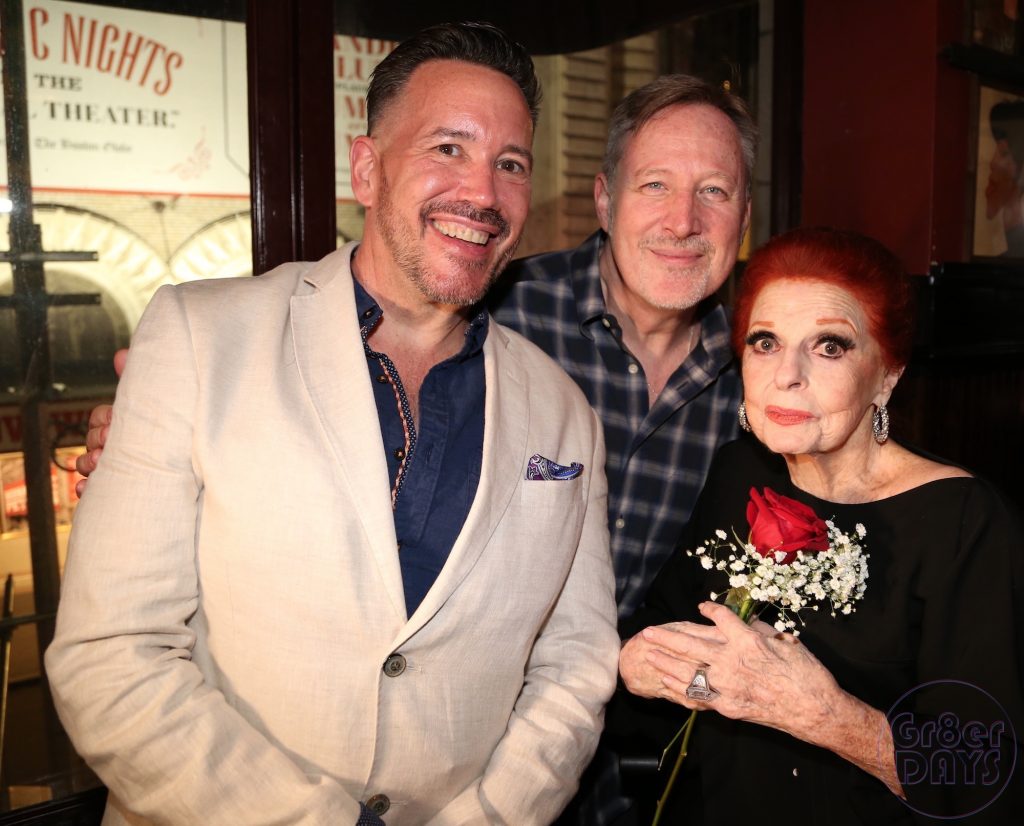 It was a winning combination, seeing so much star quality spiked with cracks like, "Death is the new 50!" 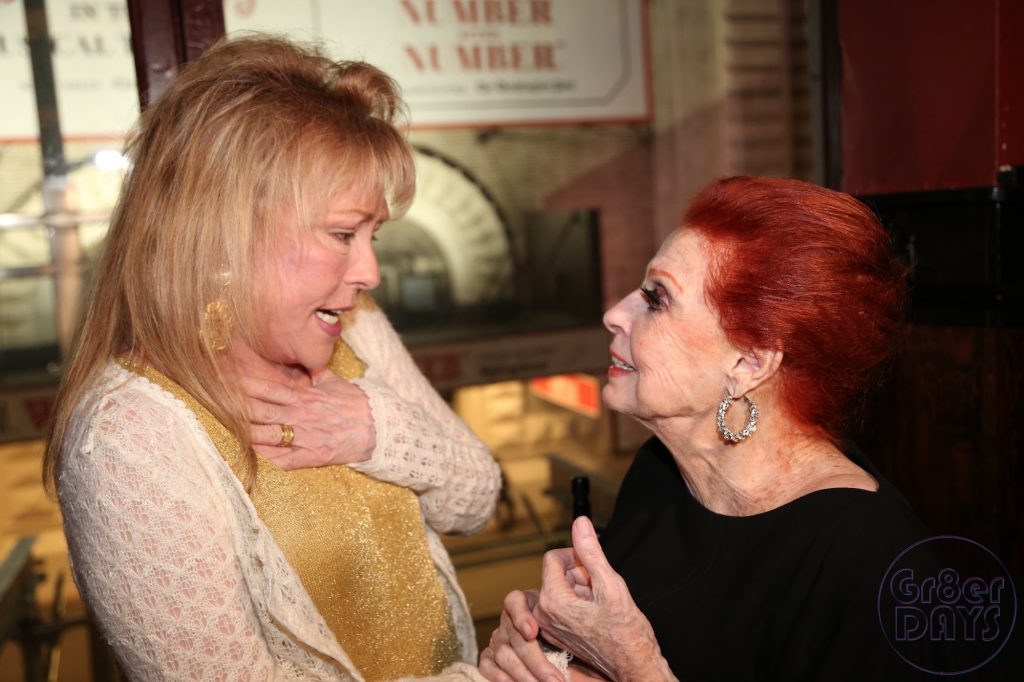 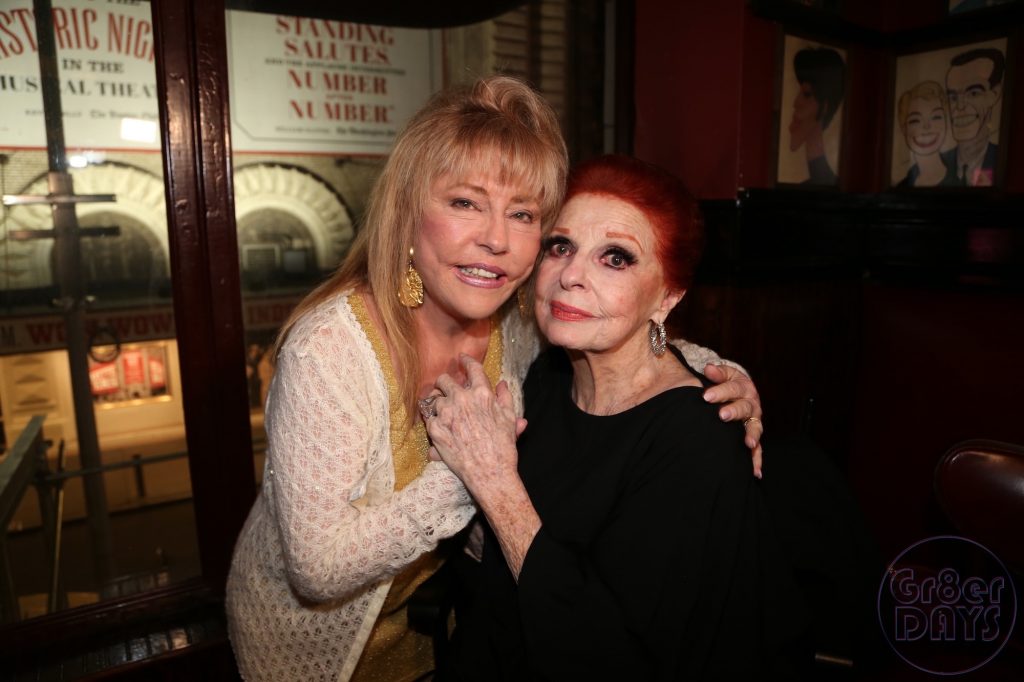 My favorite self-deprecating moment of Cook telling on herself was her story of begging an agent to come see her perform early in her journey. "He talked like the '30s," she said, one of many wonderfully evocative turns of phrase throughout the night — and charged her 50 bucks to give her a look-see. When she asked him afterward how she'd done, he said, chomping a cigar, "Let me put it to you this way — you're rockin' a dead baby." 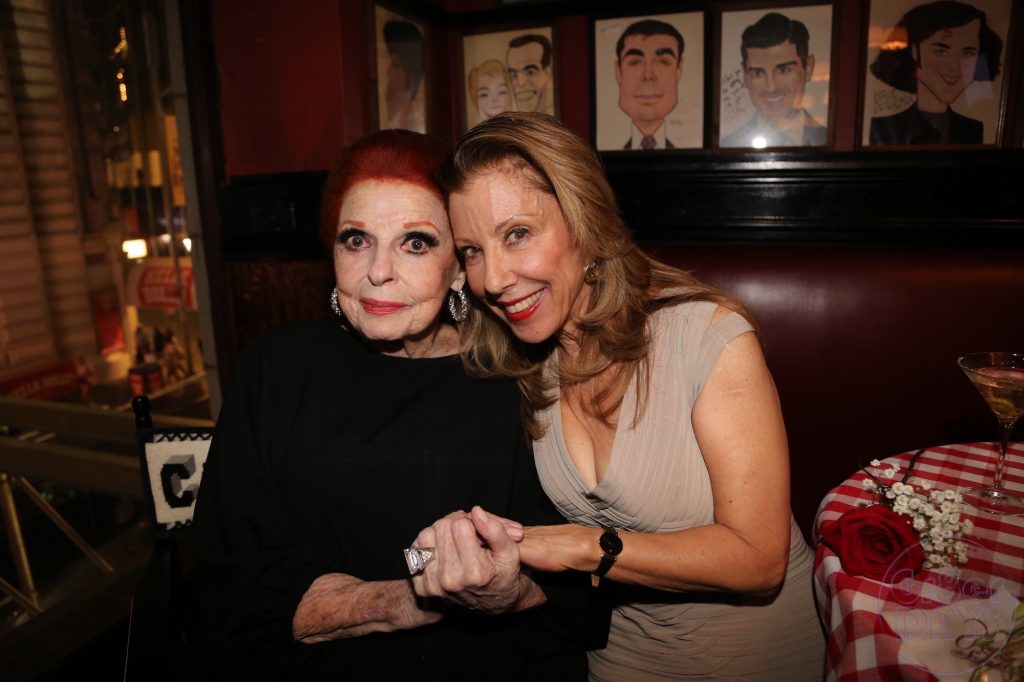 Pretty as a picture with singer-dancer Judi Mark 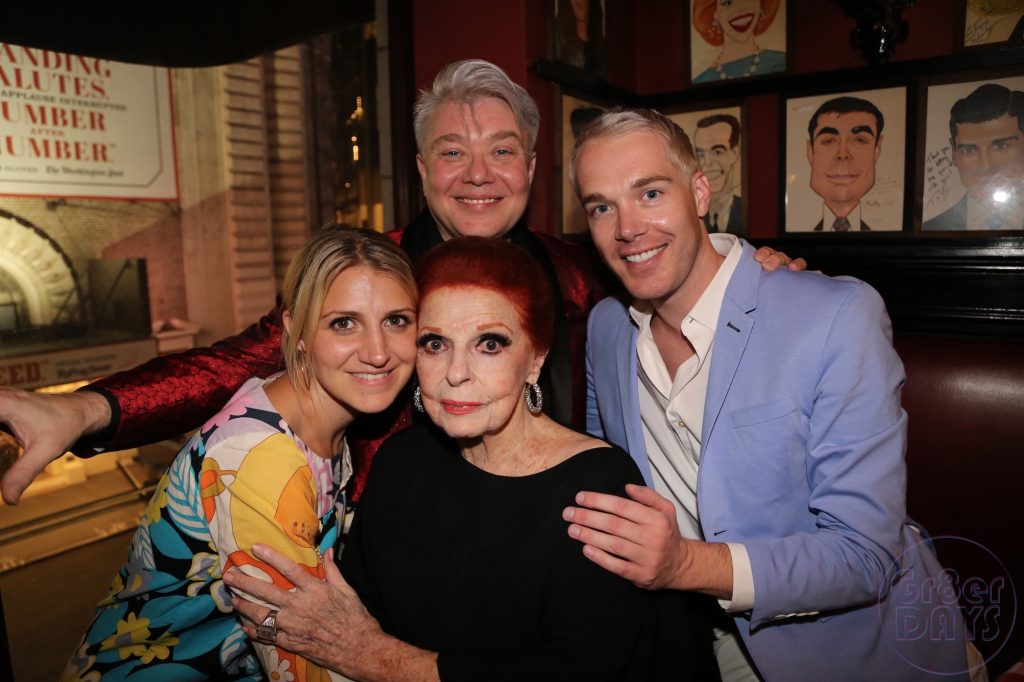 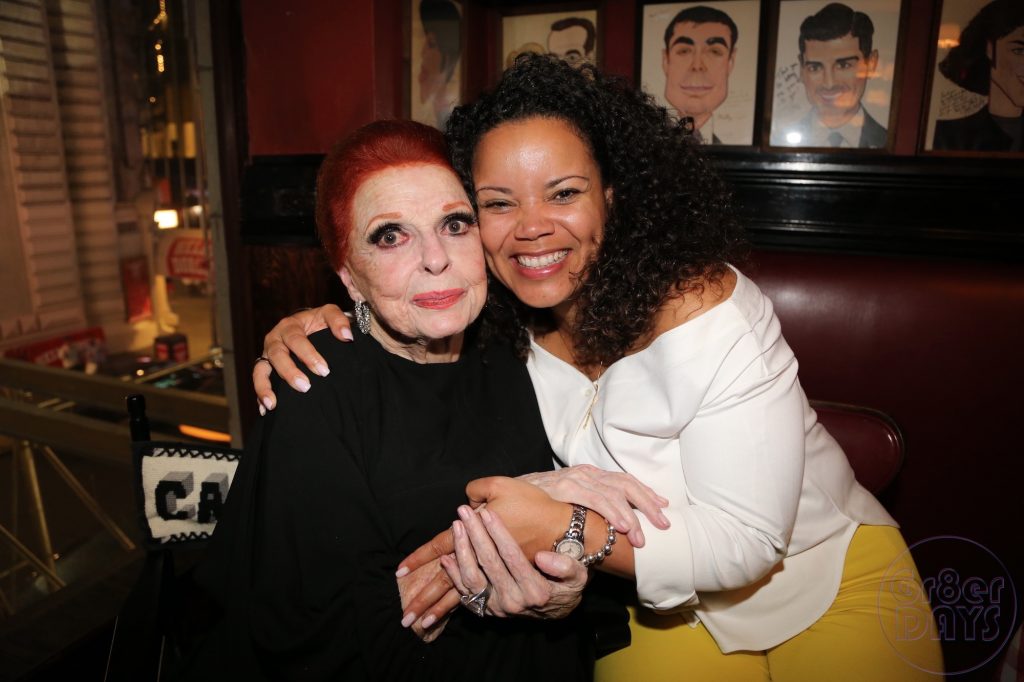 I sat near Kimberley Locke, who thoroughly enjoyed what Carole was Cook-in'. 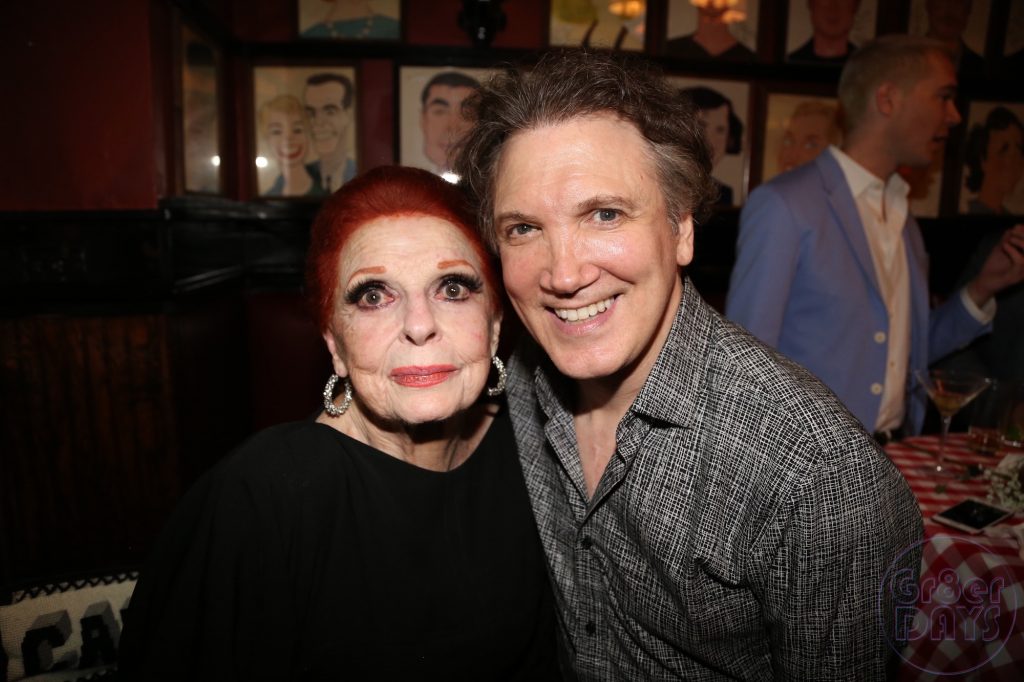 With the fab Charles Busch

One might expect singing from cabaret, but Cook's show was more of the "An Evening with ..." variety, heavy on deftly delivered anecdotes and sprinkled only lightly with warbling where it furthered her storytelling. In fact, she opened the proceedings by promising not to sing "I'm Still Here." But she certainly is still here — and still all there — and she's also still got a voice, teasing us with some of Hello, Dolly!'s title song while relating what it was like to get the call that she would be the second Dolly ever, after Carol Channing. 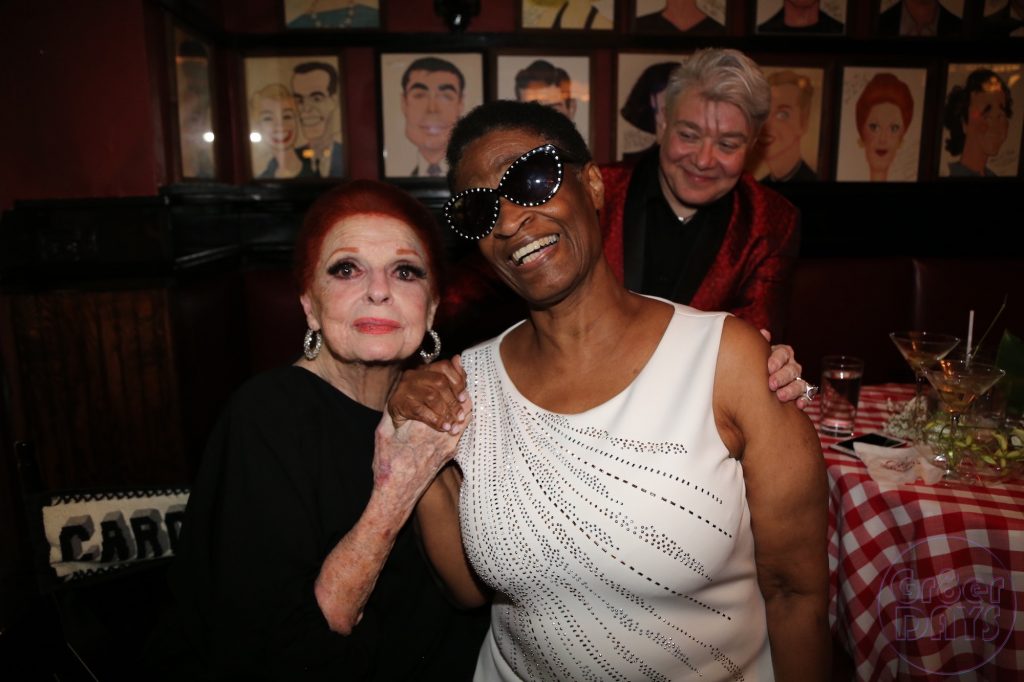 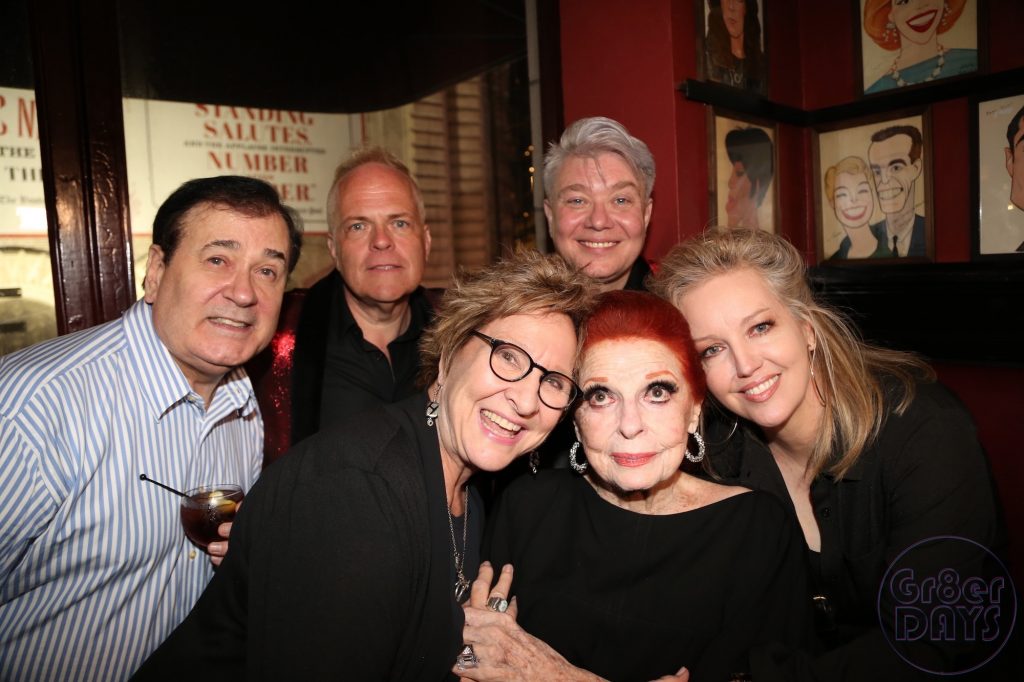 The story of learning she would be Dolly and the spine-tingling story of what it was like to find out Gower Champion had died the same day 42nd Street opened on Broadway in 1980 were unforgettable moments, like wormholes in time opening to allow those of us lucky enough to score seats an opportunity to revisit a Broadway era otherwise long past. 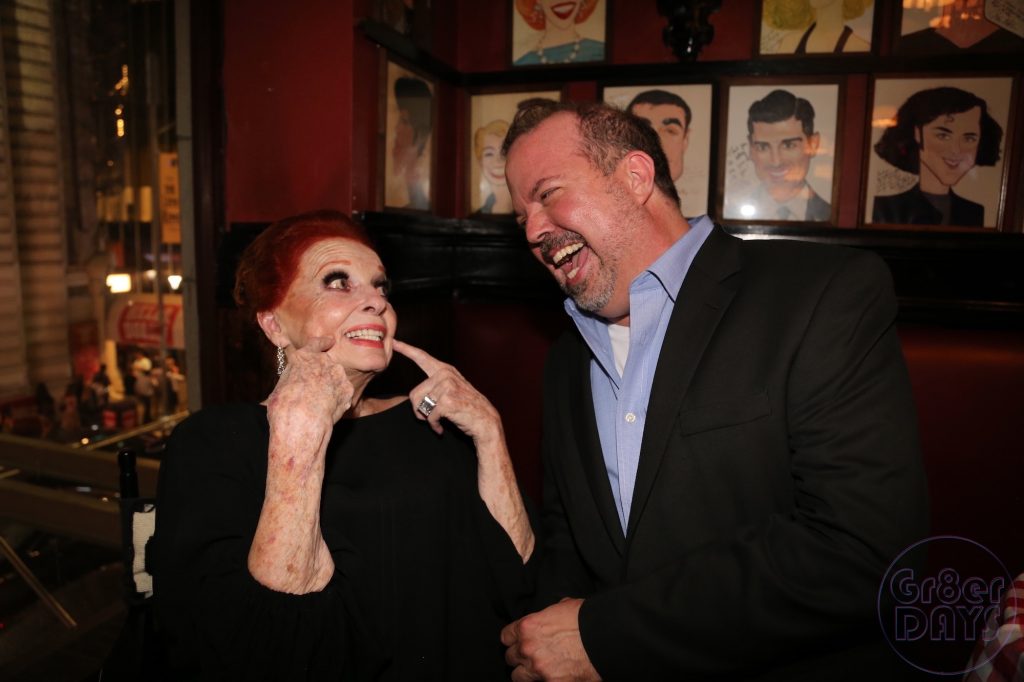 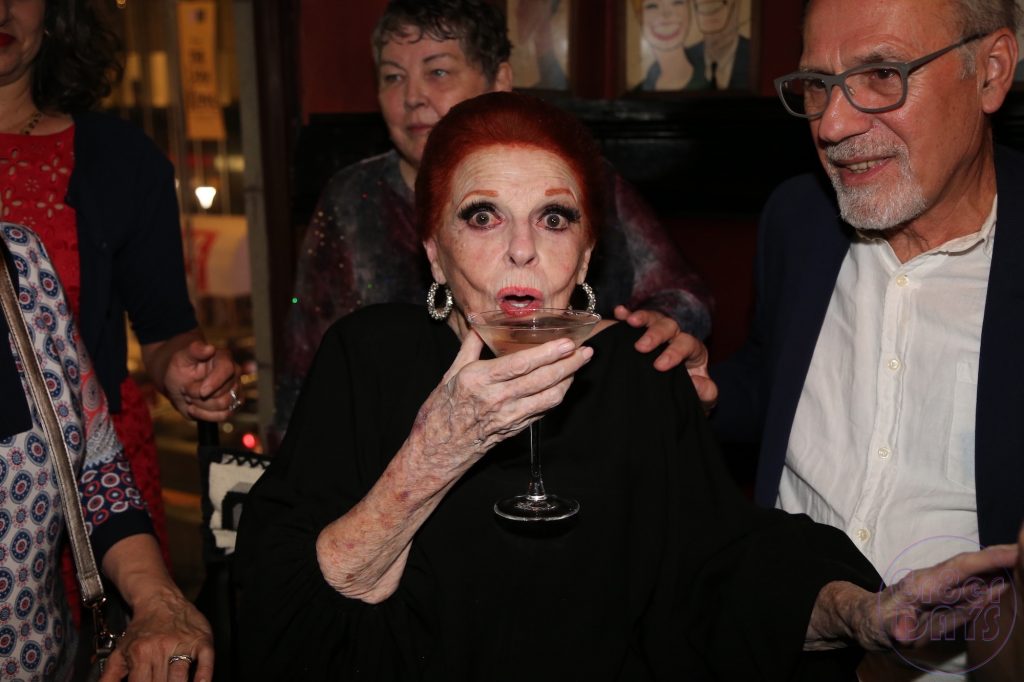 Toast of the town

As compelling as Cook's show biz stories were, her narrative of life as a kid from Texas who dreamed of becoming a star were just as powerful and absorbing. Best of all, her dreams actually came true — along with Dolly and 42nd Street and many other career highlights, she got to play Mrs. Peacham in the 1956 Off-Broadway production of The Three Penny Opera and was a familiar face alongside her mentor Lucille Ball on The Lucy Show and Here's Lucy in the '60s and '70s.

Hell, she even got banged by Richard Gere in American Gigolo (1980) — that beats having your name above the title!

Perhaps most affecting were the moments when the little girl with big dreams merged with the trouper, such as during a reminiscence of spending one last day in Central Park with a diminished but defiant Ethel Merman. 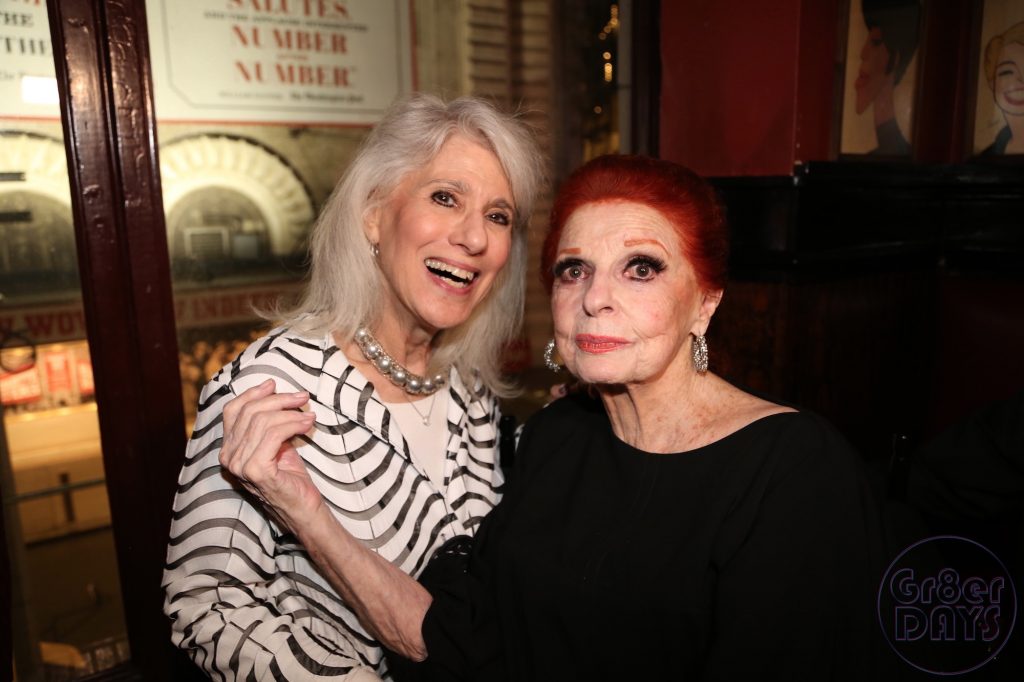 After the show — presented by Richard Skipper and Russ Woolley — and a thundering standing O, Cook was whisked to (where else?) Sardi's, where she graciously and enthusiastically received everyone who came to pay tribute, gaily bantering with her hubby of 54 years, actor Tom Troupe (b. 1928). How fitting that it was directly across the street from the current iteration of Hello, Dolly! 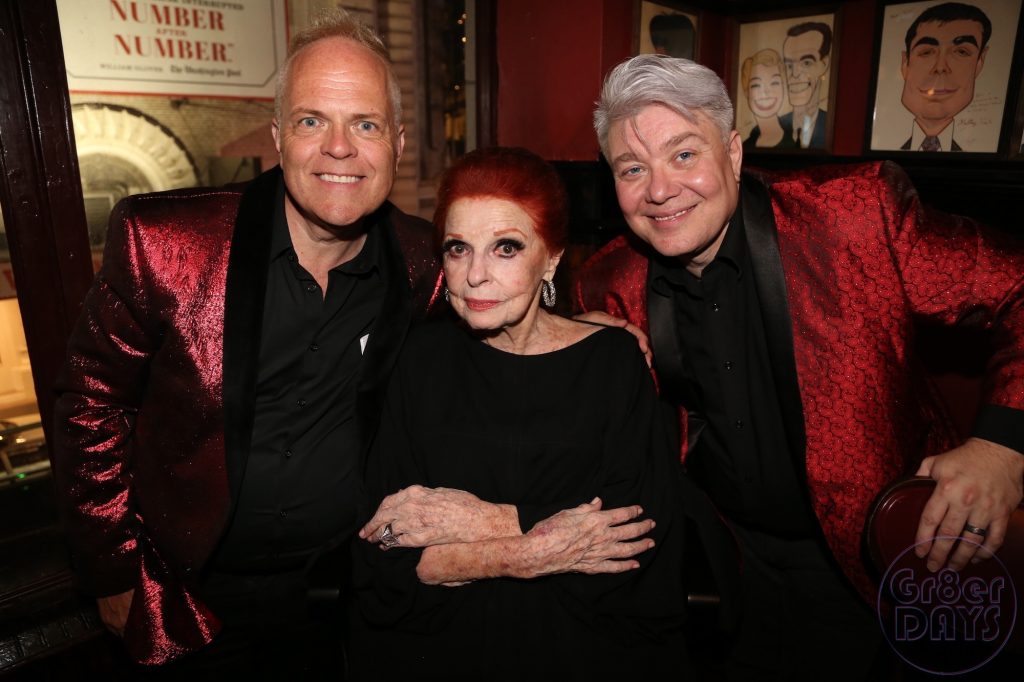 It was the perfect coda for a perfect evening that worked both as nostalgia and, surprisingly, as art.