Golden Age of Hollywood actress Marsha Hunt will turn 101 this fall, but like Olivia de Havilland (b. 1916) — who won the role of Melanie in Gone with the Wind right out from under her — Hunt is a true survivor, and isn't voluntarily going away any time soon! 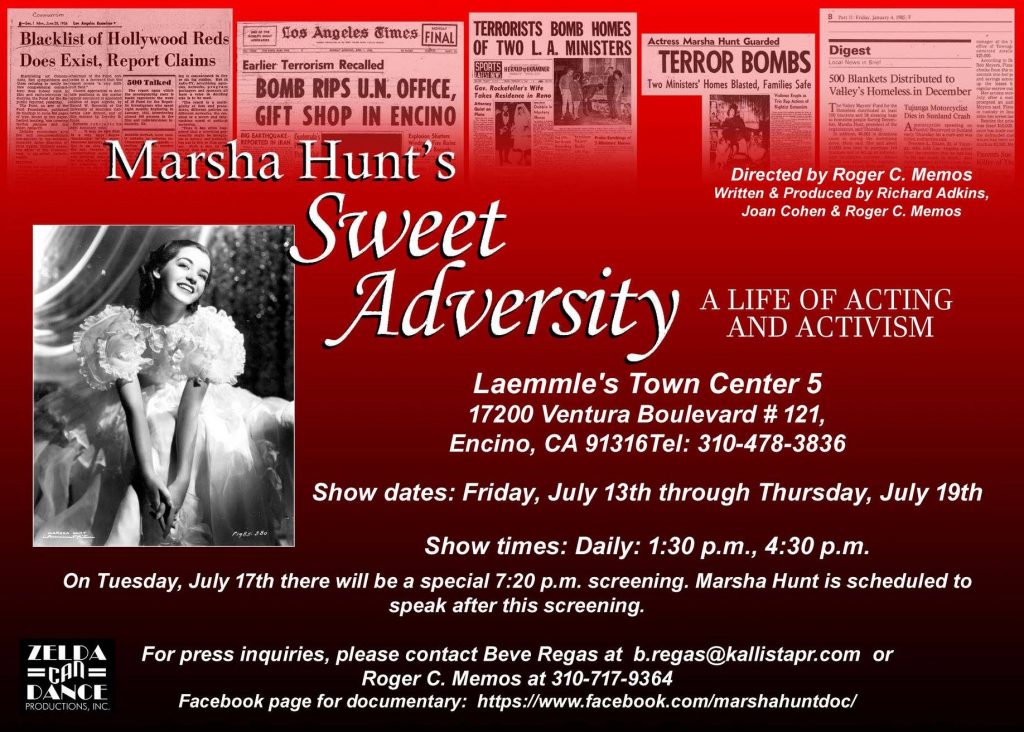 The actress, best known for her roles in the films Gentle Julia (1936); These Glamour Girls (1939); Pride and Prejudice (1940); None Shall Escape (1944), the first Holocaust movie; and Johnny Got His Gun (1971), is the subject of the documentary Marsha Hunt's Sweet Adversity, which is playing in Encino, California, all this week. 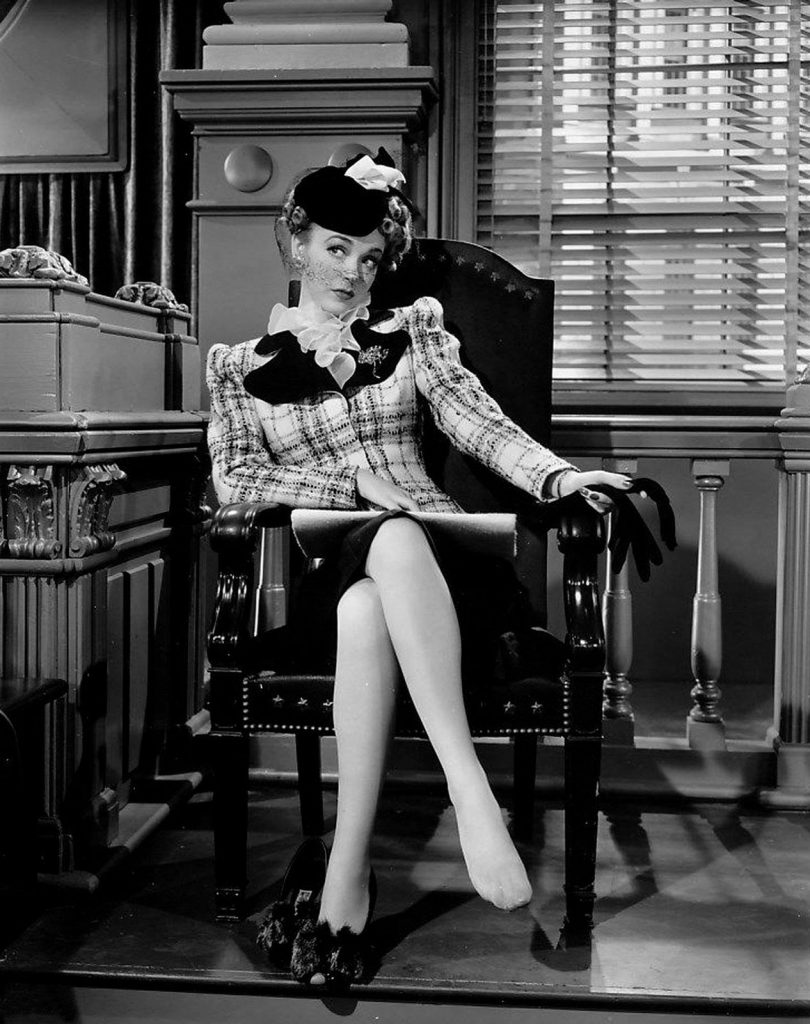 Hunt appeared at more than one screening, thanking her fans for their support and offering memories very few living people have to impart, including hanging out with Jean Harlow (1911-1937), working with young John Wayne (1907-1979), and watching FDR (1882-1945), whom she dubbed the "one-take prez," filming a short speech from the White House. 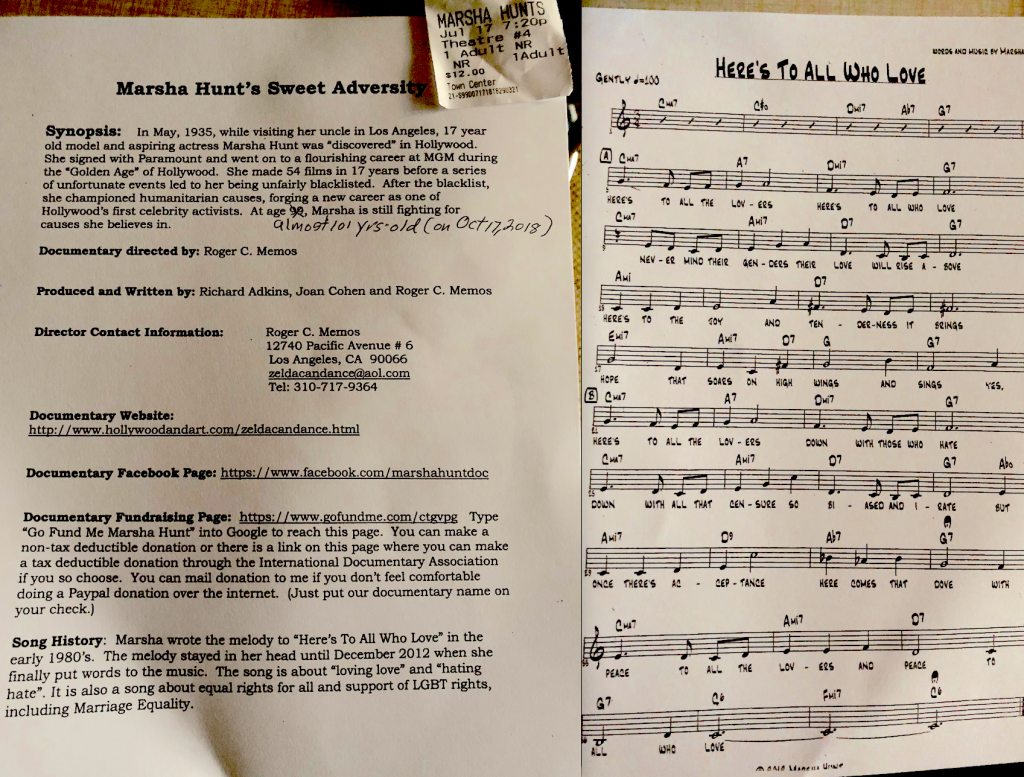 "Are there any liberals here?" she asked at last night's screening. The longtime activist was blacklisted as a Communist back in the day — something she wasn't, yet it was the sentiment she objected to, not the unfair nomenclature.

She said of the Duke:

John Wayne was a nice guy. That's all I can say. We made a small western picture when we were both at Paramount [Hell Town, 1937] and I was still in my teens, I think. And he, you know, he grew taller than statues and became everybody's hero.

We met at midnight, having Bob Taylor (1911-1969), Jean Harlow, and I — the three Hollywood emissaries — had been to eight hotels and three theaters, making speeches, appearing at all of them, and they were all having birthday balls for the President; it was all pretty gala. And we wound up in the White House, down in the basement, in quite a small room, and I guess because of the broadcast, I guess, I guess they had the wire proper for that room. In any case, he was there and we were there and it was midnight and he had his message to the nation ... He said it once and the camera shut down and ... he said, "Was that all right? Would you like another? You want it again?" and they all said "Oh, no, Mr. President! That was perfect." So I, under my breath, said, "One-take prez."

He was sitting on the top of a convertible car and she hung on like a madwoman. He was turning purple. The car progressed and she hung on to those ties and somebody had to just knock her down and .. which probably saved his life. Fans!

On losing Gone with the Wind to Olivia de Havilland:

Most importantly, she discussed being blacklisted:

People hire you to make films, or they don't. And it was "they don't" time. They thought it was my decision ... I'll act till I die, till I drop, if they let me ... I stayed ignorant about it. I'm told I actually knew several people who were Communists, but we didn't talk about it and I didn't know it. They were fellow humans ...

Gr8erDays reader Chexy Decimal shot the following footage of Hunt on July 17. In it, she thanks the audience and then is reunited with a man who, as a soldier in 1943, has long remembered a brief dance they shared at the Hollywood Canteen:

The footage reveals a modest, grateful woman, one who feels — even at age 100 — that her work is not yet complete.

My sister in law Kathey Haas 's Dad Karl Rupp, a veteran of TWO Wars surprised Marsha last night with the news that he...