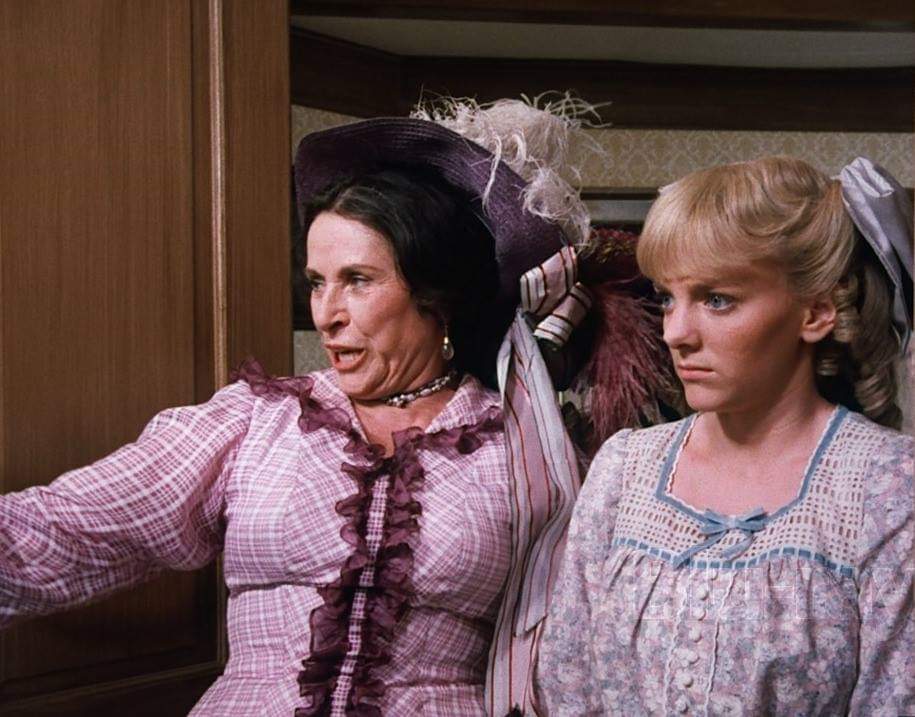 MacGregor launched her theater career in off-Broadway and Broadway shows in the '50s, and appeared in the film On the Watefront (1954) in an uncredited role before focusing mainly on TV work.

Her juicy role as outrageously nasty Mrs. Olesen defined her legacy, and she played it with gusto. She said in 1981:

"I look for the humor of Mrs. Oleson ... I began mixing farce into it. I think the audience counts on seeing Mrs. Oleson fall on her fanny.

After Little House ended, MacGregor acted on screen just one more time, in a 2014 short. She had other priorities; when the series-ending episode was shot, she refused to reschedule a pilgrimage to India to act in it.

She was also a teacher, and from her home at the Motion Picture & Television Fund residence in Woodland Hills, California, wrote, directed and produced plays for a local children's group.

Her counterpart on Little House on the Prairie, Mr. Olesen aka Richard Bull, passed away in 2014.

MacGregor's adoring castmates, friends and fans have begun to eulogize her on social media:

I just got word that Katherine MacGregor passed away yesterday. This woman taught me so much... about acting... vintage jewelry... life. She was outspoken and hilariously funny. A truly gifted actress as she was able to play a despicable character but with so much heart. Her Harriet Oleson was the woman our fans loved to hate. A perfect antagonist. The thing people outside of our prairie family didn’t know, was how loving and nurturing she was with the younger cast. I really loved her and I find great comfort knowing that she is at peace and, per her beliefs, her soul has moved on to its next incarnation. Farewell Scottie. I hope with all my heart we meet again next time.

A post shared by Melissa Gilbert (@melissaellengilbertbusfield) on Nov 14, 2018 at 6:29am PST

Very sad to hear about the passing of Katherine MacGregor, aka Harriet Olson... She will be missed by the entire LHOTP family... thoughts go out to her loved ones and especially @Arngrim and @MEGBusfield... ??? pic.twitter.com/cZCaMv2r8p