That’s All She Wrote: 20 ‘Murder, She Wrote’ Swan Songs

Murder, She Wrote (1984-1996) starring Angela Lansbury (b. 1925) was famous for its folksiness, its longevity, the fact that the star seemed to find hersel mixed up in hundreds of colorful murders ... and for luring dozens of old-time stars to perform.

As it turned out, many were taking their final bows. 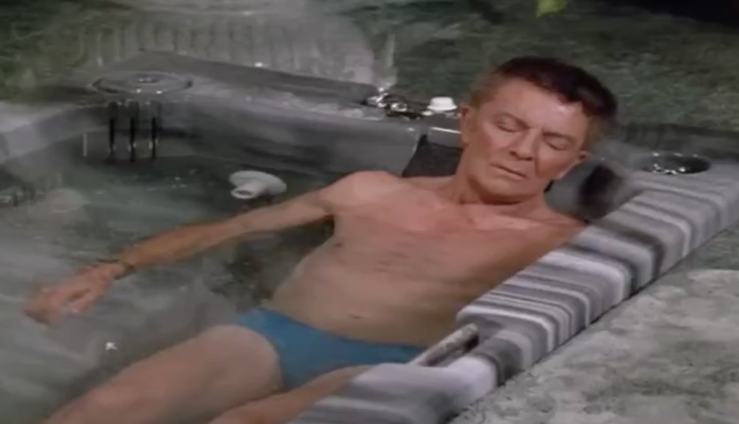 Cornel Wilde's demise was a shocker! (Image via CBS)

Below is a list of 20 actors — most of them from the Golden Age of Hollywood — whose last on-screen performances (TV or film) came on episodes of Murder, She Wrote: 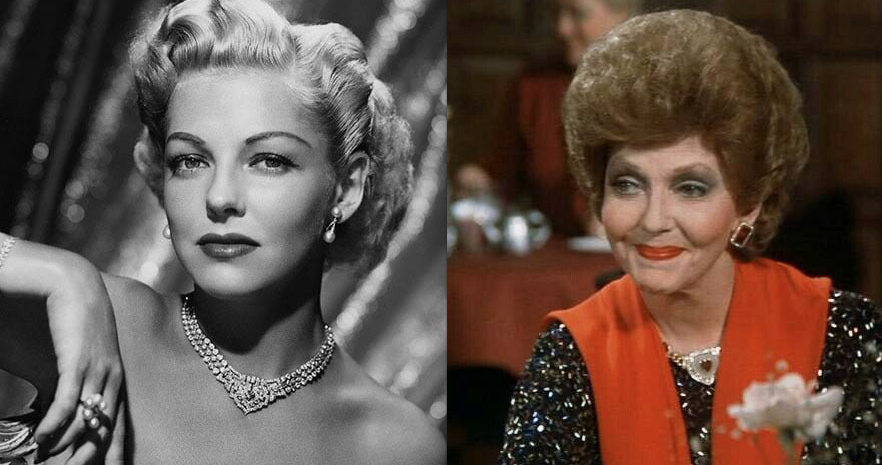 One of the very best bye-byes belongs to Blaine, who gets to play faded Broadway baby Rita Bristol in this first-season popcorn-muncher. You'll love watching her watching herself in an old movie clips, crying over a murdered associate, bitching out the incompetent stage crew during rehearsals for her comeback and emoting as she frets over her sobriety. Classic quote from Rita/Vivian: "Nobody knows you — or much cares — when you're riding the down escalator." 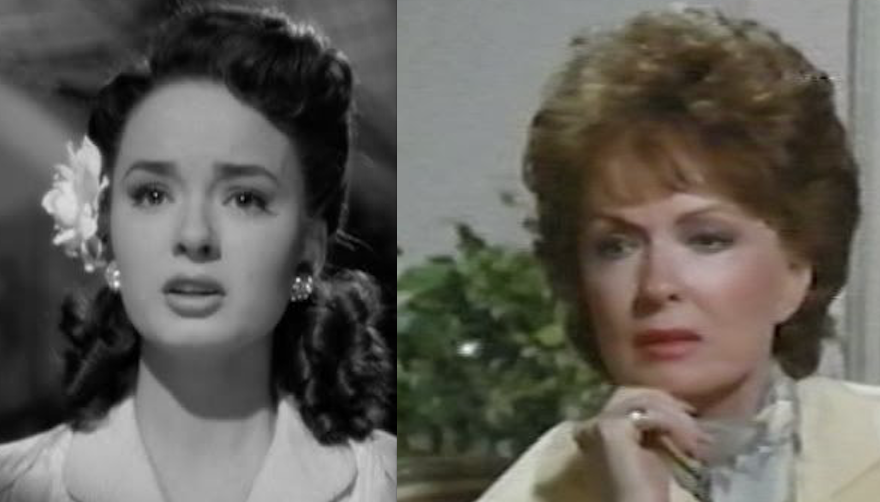 Mildred Pierce (1945) star Blyth gives a lovely final performance as Francesca Lodge, a woman being gaslighted. It's a shame she gave up acting — she's still active and looks great today, at age 90. 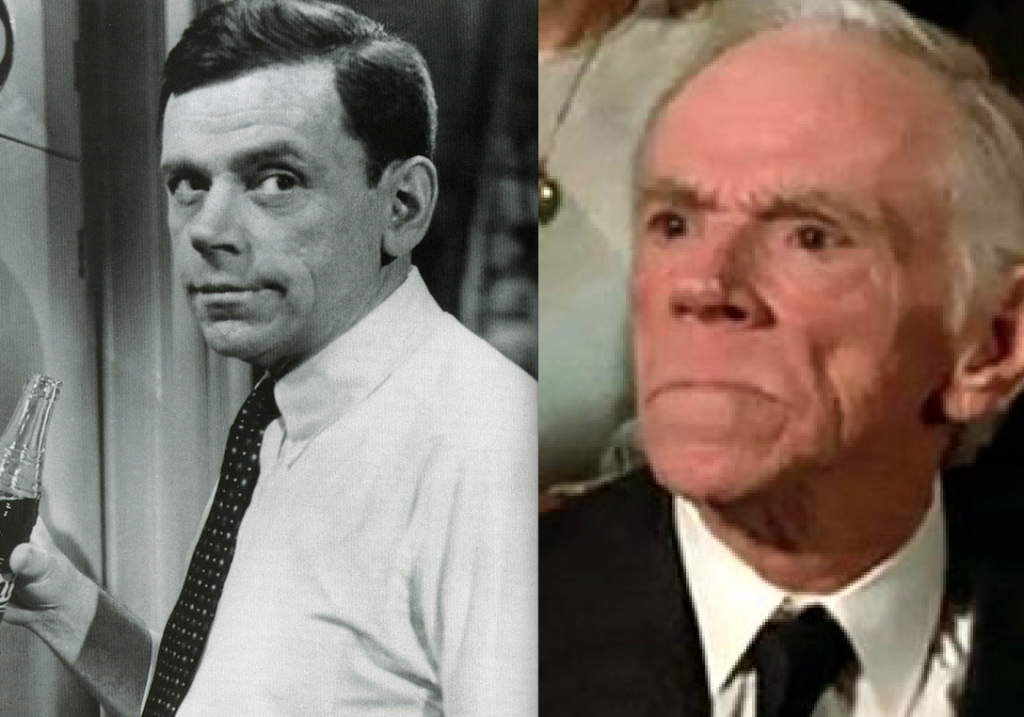 The Itch is back (Images via headshot/CBS)

One of the best episodes of the series, "Trial by Error" is a clever jury mystery. Well into his seventies, Ewell is an ornery part of the 12 angry men ... and women. Great twist! 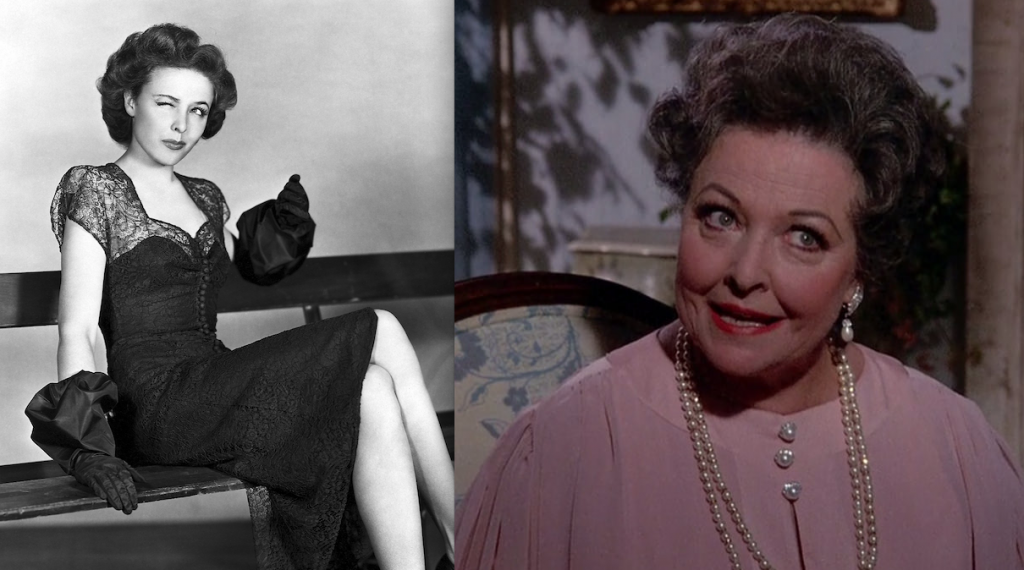 Golden Age sweetheart Day made her last appearance in a two-part episode, playing willful grandma Constance Fletcher, who tries to impose her ideas on a young couple's southern weddin'.

He's with the Band. (Images via head shot/CBS)

Sadly, Tony and Oscar nominee Frey — best known as outrageous Harold in The Boys in the Band (1970) — was sick with AIDS when he shot this episode. Playing fussy Felix Casslaw, Frey is in top form. Note: A episode of Walt Disney's Wonderful World of Color in which he appeared aired within two weeks of this, but I believe he shot Murder, She Wrote last. He died the following year. 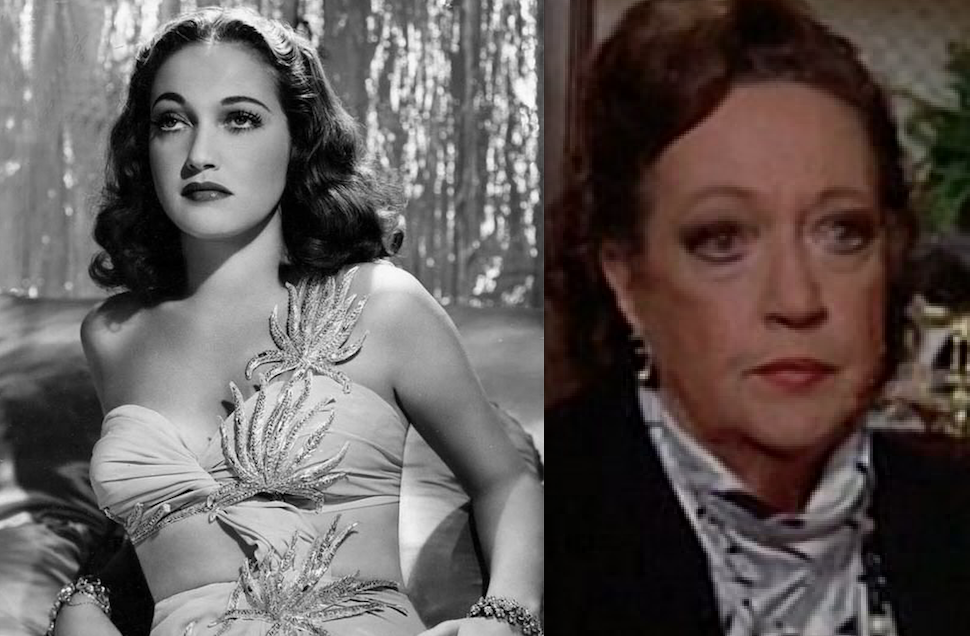 We loved her sarong time! The last movie Lamour shot was Creepshow 2 (1987), but her final filmed performance was as Mrs. Ellis in a charming episode of Murder, She Wrote. She's positively perky as a woman seeking the accounting services of Jessica's beleaguered nephw and displays an ability to deliver a wisecrack and a sight gag.

A leg up (Images via head shot/CBS)

Tragically, the relatively young and spirited Prowse — just 50 at the time of filming — ended her career decades early due to failing health. Here, she is Valerie Bechet, employing one of the episode's many sketchy French accents, and opens the show with a fetching rendition of "La Vie en Rose." Prowse gets to close the episode singing as well, and also gets to be the killer. The gorgeous Barbara Rush (b. 1927) is a workaholic designer in the same, too-fun episode. 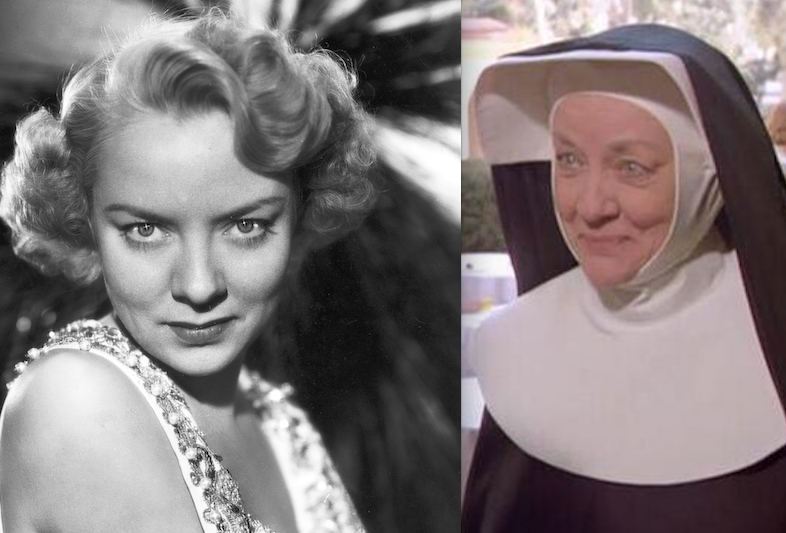 Film noir dame Totter goes out as a nun in this episode, about another nun's alleged suicide. (Lesson learned: Never set up the murder of a nun to look like suicide.) Her part is microscopic, unfortunately. The episode is rife with larger, juicier perfs, including a deliciously caterwauling Eileen Brennan (1932-2013) and a sweet Jane Powell (b. 1929). 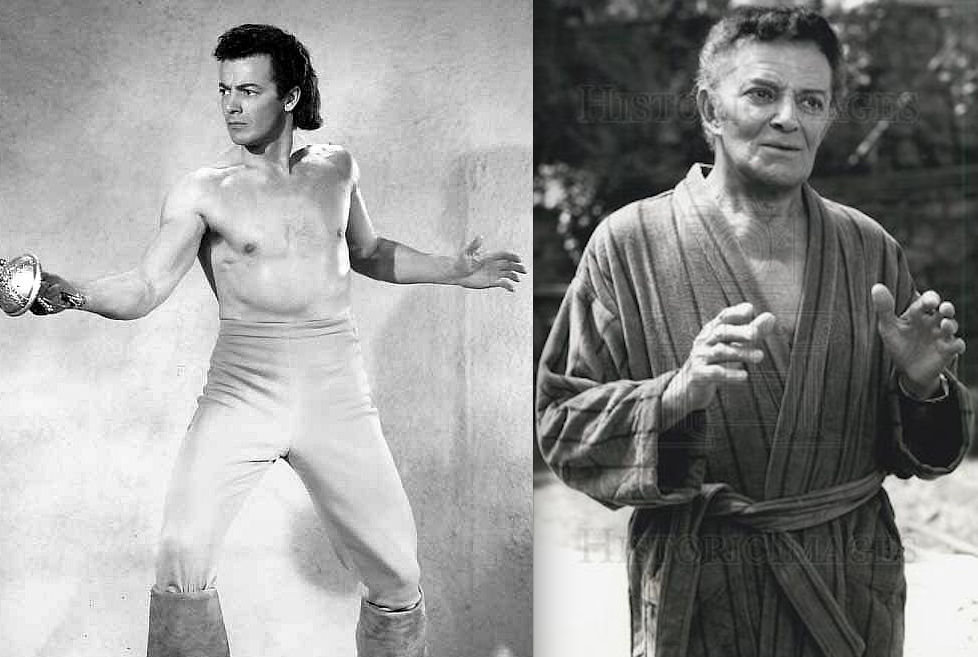 The big-screen hottie's last filmed performance was as Duncan Barnett in this episode, about a CEO who is helped into retirement via an electrical appliance in his hot tub. The fact that he dies in liquid makes his name — "Duncan" — ironic.

Caulfield hadn't acted in a decade when she appeared as an appealingly naive woman whose sister — a madame, unbeknownst to her— dies suddenly and is cremated  before she is even told. According to a 1989 L.A. Times article, Caulfield's hiring was the suggestion of Van Johnson (1916-2008), who also appeared on the show, but not in this episode. It's a sweet role for Caulfield to depart on, allowing her to open and close the episode. 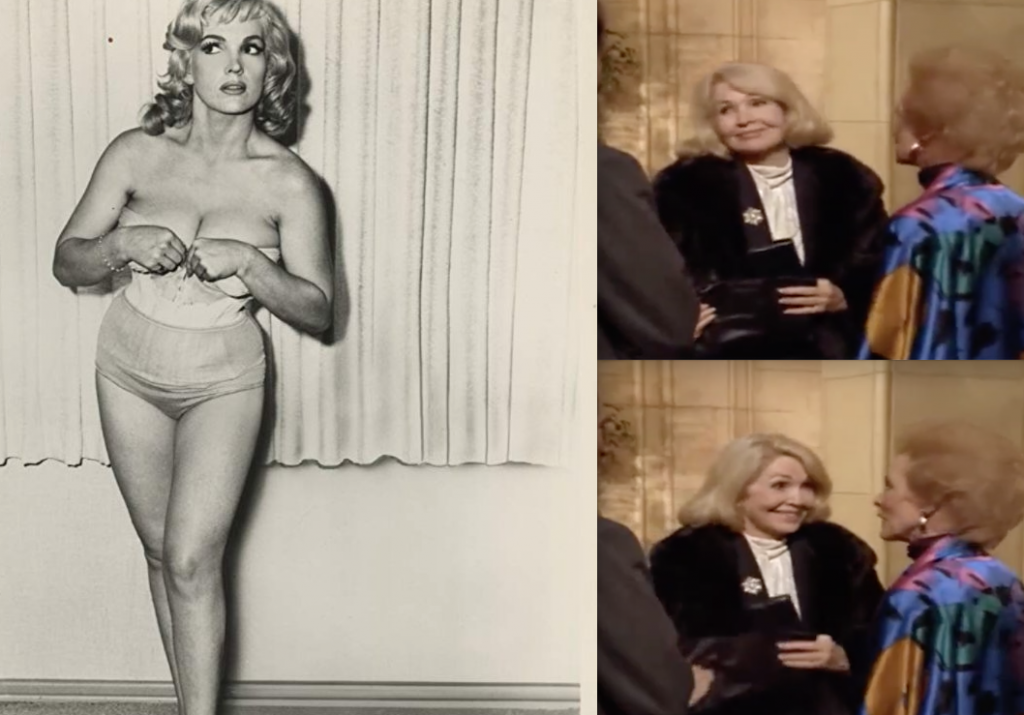 Redding for her close-up! (Images via head shot/CBS)

Redding, a buxom glamour gal of the '50s in the mold of Marilyn Monroe (1926-1962), owns the dubious distinction of having the least significant final Murder, She Wrote role. In this ep, she is seen, but not heard, and does nothing more than smile as Janet Leigh (1927-2004) does all the talking. But hey, she's still the youngest of everyone on this list who is still alive! 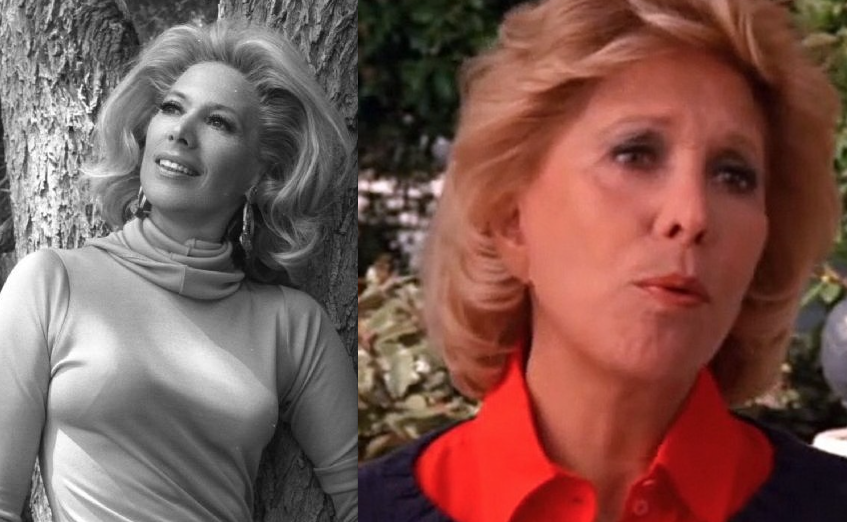 The singer and ageless talk show host played Emily Dyers (get it? "die"-ers?) in this one, an episode that finds Jessica investigating a murder she doesn't believe could have been committed by one of her (very) old college professors. Shore's sorority house mother character pours on the saccharine southern charm. 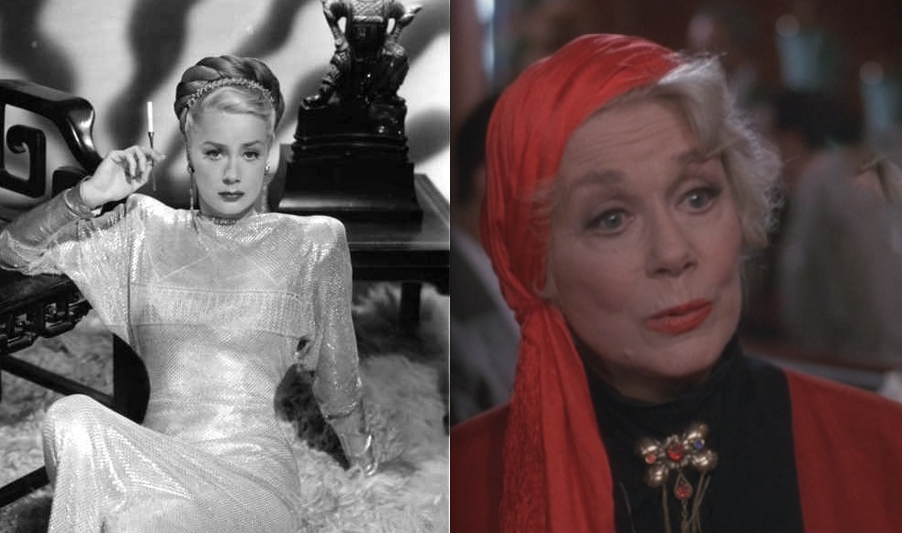 If you saw Gypsy (1962) in the theaters — or any stage production — you know the story of Havoc, who was Gypsy Rose Lee's (1911-1970) sis. The longtime stage and film star actually appeared twice on Murder, She Wrote, with her last time being, well, her last time. She plays Lady Abigail Austin in this episode, which relies on flashbacks to a 1947 killing.

Radio, film, TV and advertising star DeCamp plays a sneaky postal employee here, one whose decision to hold — rather than destroy — a damaging letter leads to Jessica handing it over to the person who really could've, and might've, lived without seeing it. 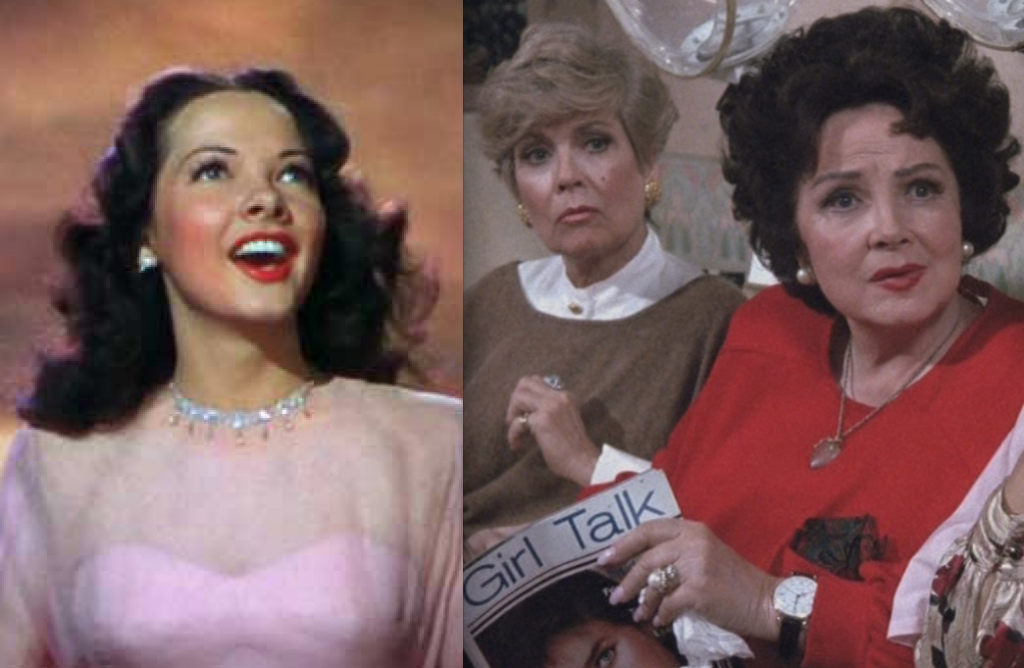 Nothing but the Ruth (Images via head shot.CBS)

We got two for the price of one when Grayson and Roman chose this episode as ttheir last work. Roman had played gossipy, raspy-voiced beautician Loretta Spiegel in two previous episodes, as had Grayson twice before played chowderhead Ideal Molloy. Both characters — really, everyone in that beauty parlor — are so much fun, it's a wonder they weren't used more. 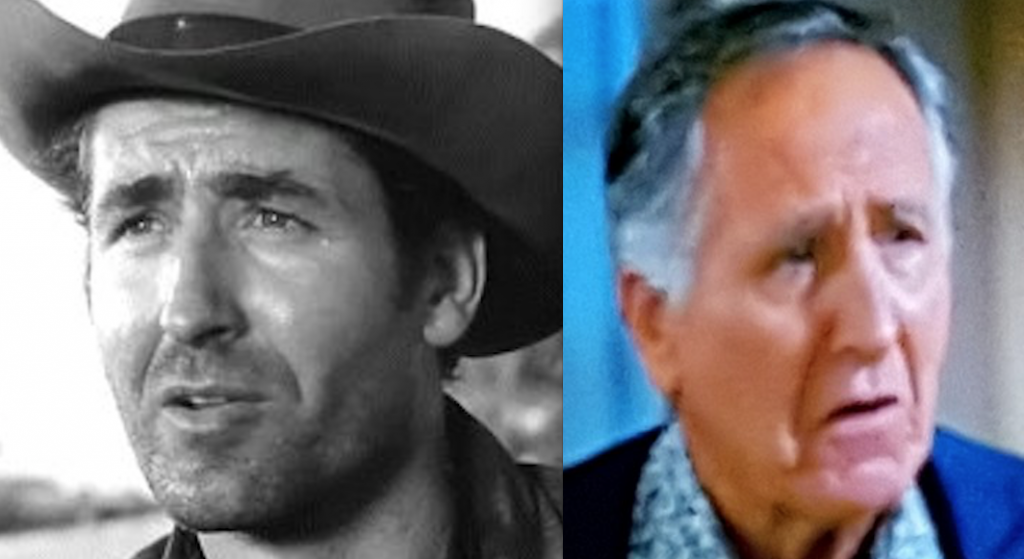 Western actor Wooley — far more famous as the singer of "Purple People Eater" (1958) — makes his last on-screen appearance in this episode about a murder in Nashville. 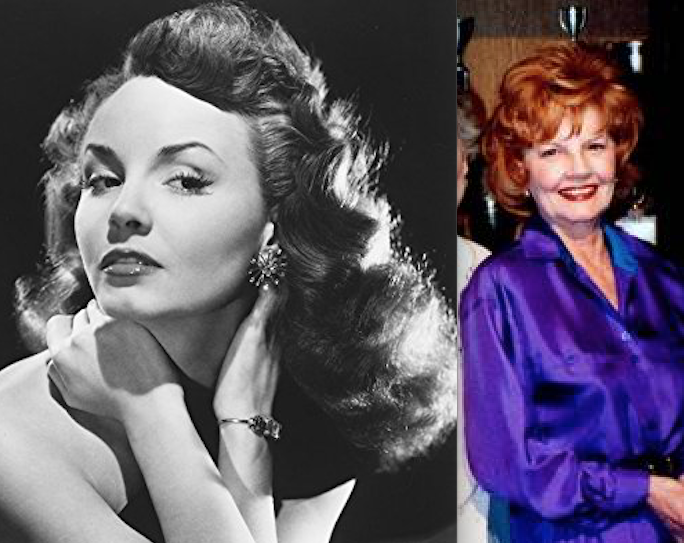 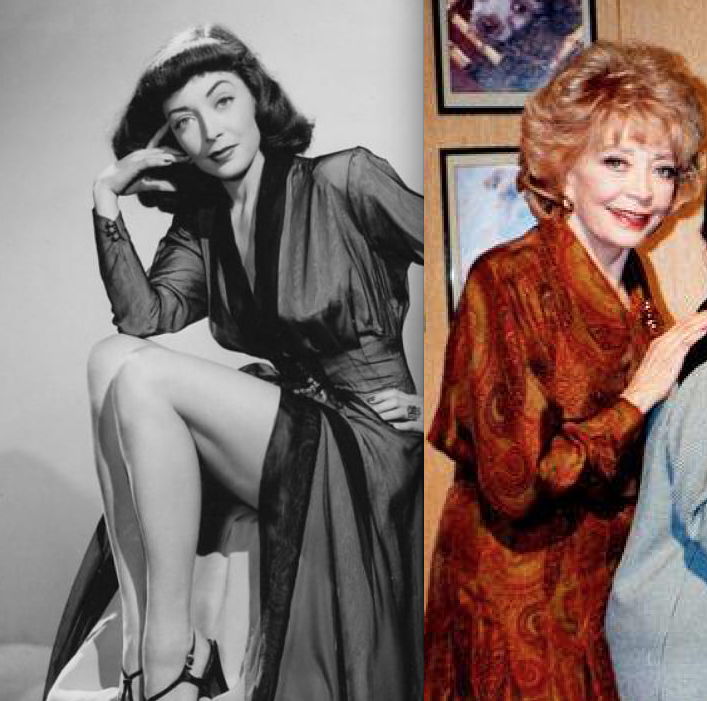 When a fan impersonating Jessica gets offed, it's a recipe for murder. Contained within the same ep, we get final looks at both Blair and Windsor — as well as charming performances by a group of other Old Hollywood A-listers. One of the most shamelessly enjoyable of all the nostalgia-driven episodes. 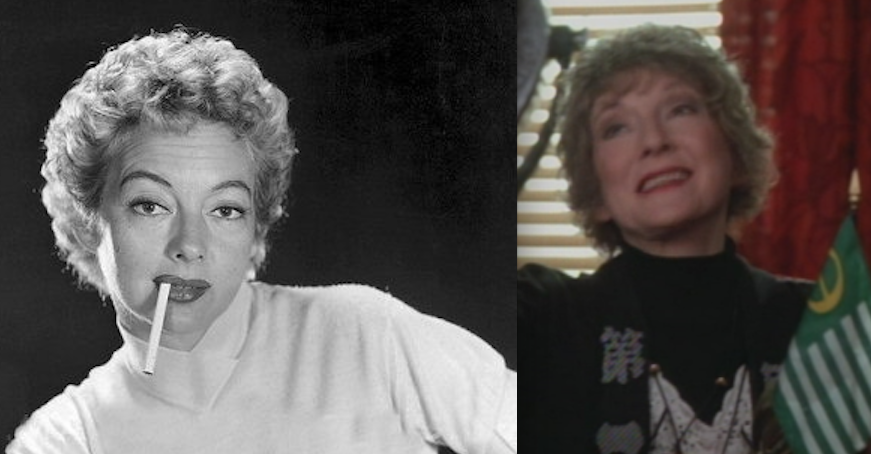 Keyes, a wonderful B girl who also graced Gone with the Wind (1939), guested on three different eps over the course of eight years, ending with this one. Molly Hagan (b. 1961) plays a lying former intern of Jessica's, and when she's accused of murdering her new employer, she has to rely on her old employer's help. Keyes's apperance is brief, but radiant.