Lindsey Buckingham Goes His Own Way: A Review

My friend Mike invited me — spur-of-the-moment — to go with him to the Lindsey Buckingham Solo Anthology North American Tour 2018 at Town Hall in NYC last night. The tickets, including a VIP meet-and-greet pass, were free, and I have always had a soft spot for Buckingham, now 69. 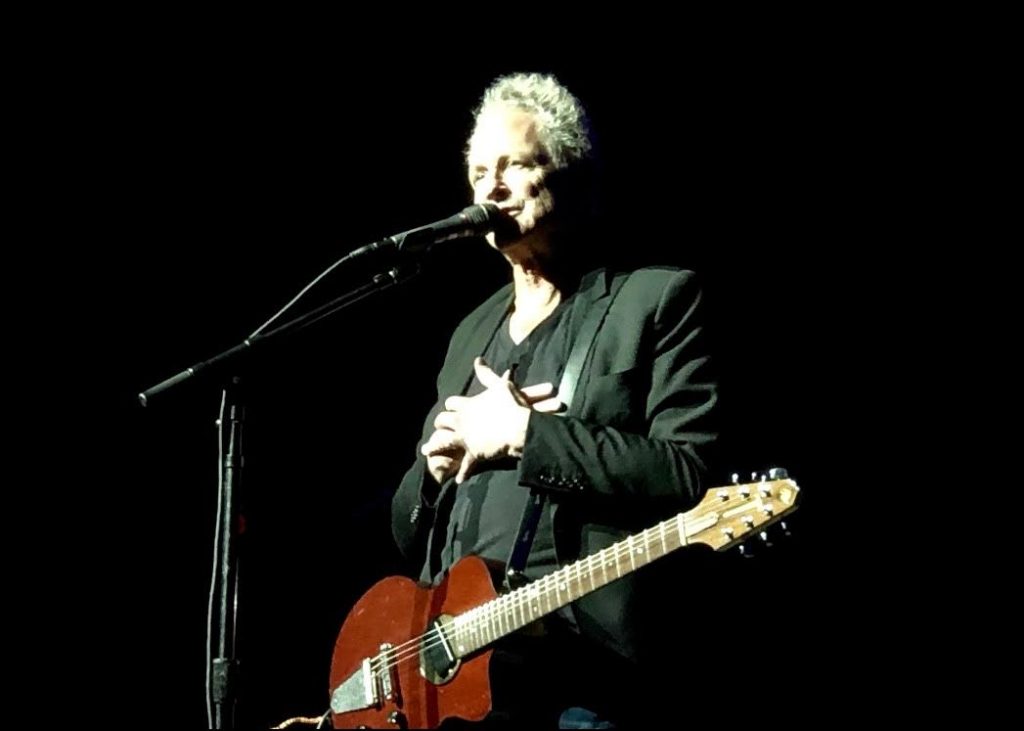 Buckingham, from the heart (Image by Mike Summers)

It wasn't until I got to the venue that it dawned on me my appreciation for Buckingham and, to the extent I have it, Fleetwood Mac, had come from my high school friend Jeff, a sort of neo-hippie with a dark streak who love Buckingham's angry diction and raging guitar licks, as well as his mellower side, usually brought out when spiked with Stevie Nicks (b. 1948) and Christine McVie (b. 1943). 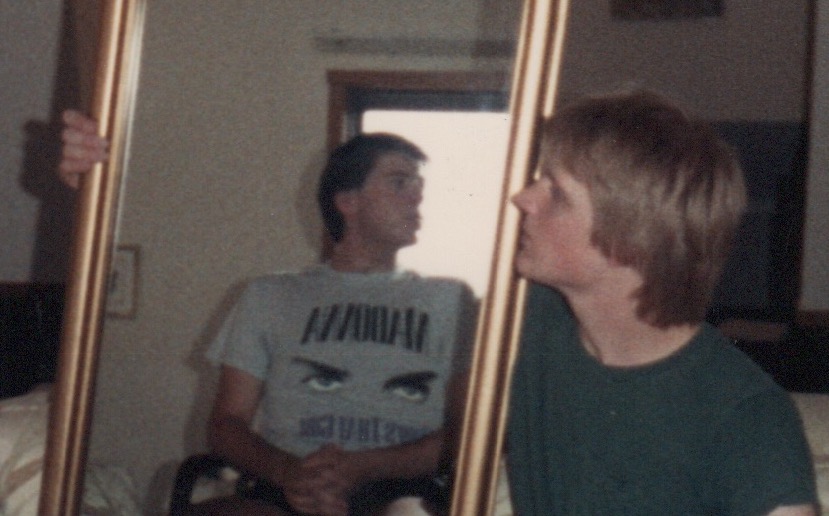 Here I am (L) with Jeff (R). We thought this fake-kissing-in-the-mirror pic was radical. (Image by Matthew Rettenmund)

I got a little emotional thinking about the fact that Jeff died years ago (and I didn't find out for years after the fact), and yet here was Lindsey Buckingham, freshly severed from Fleetwood Mac, moving onward and upward. And here was I, fretting about my finances, my choices in life, my upcoming birthday, and not pausing to think, "But I'm alive."

Buckingham's show — following a completely charming set by the gifted J.S. Ondara — was very much about "but I'm alive," an optimistic celebration of his past that served as a confidently proud assertion of legacy, and of direction. 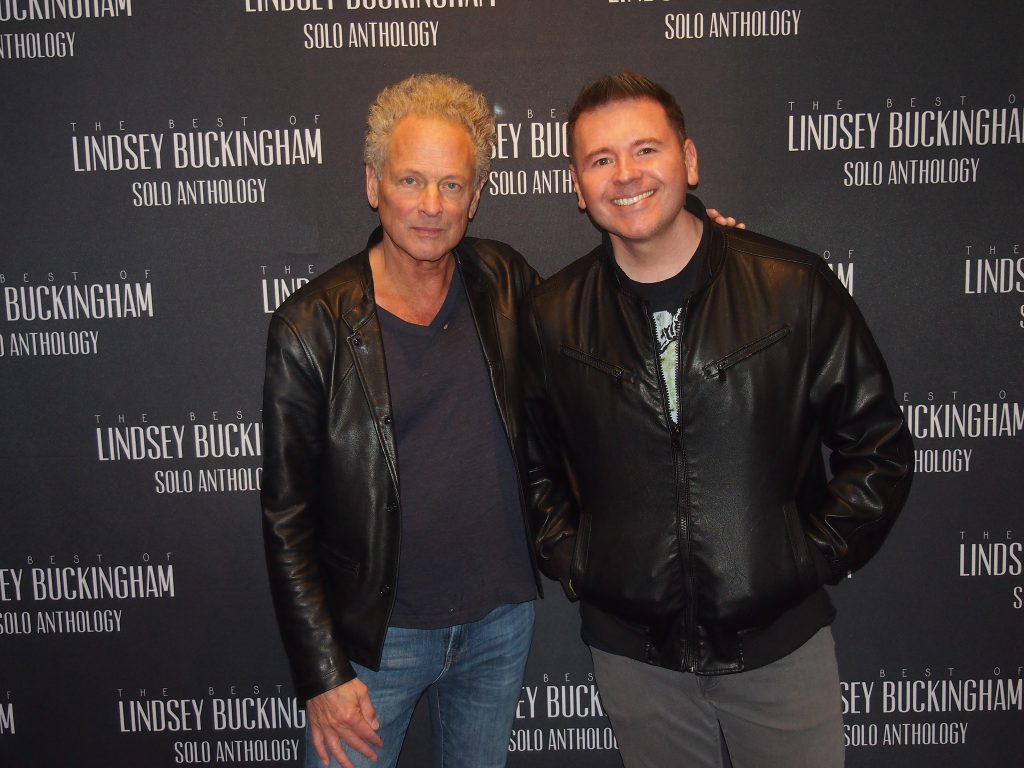 He was on a major charm offensive all night, having first been so sweet during his meet-and-greets, warmly taking what fans had to offer (including a kiss on the neck from one) and giving it back. I told him I'd never seen him perform live and he said, "I hope I don't disappoint." (By the way, the disclaimer for the meet-and-greet warned us to not arrive smelling of alcohol, but then it was held in the venue's bar — go figure. He didn't seem fazed by that, but did helpfully inform the young, young, young photographer that a direct overhead light never helped anyone.)

Lindsey Buckingham was all choked up thanking his fans at Town Hall in NYC.

Posted by Gr8erdays on Wednesday, December 5, 2018

Onstage, he radiated humility, stopping the show several times to thank us for supporting him, and to refer to his post-Mac phase as "a new beginning." He appeared to be overcome at times, especially when singing the newly meaningful "Never Going Back Again" (1977).

I knew I was a shallow fan— I didn't pretend to be as big a booster as the much younger girl and guy we spoke to, one of whom could barely string words together out of excitement and the other of whom said she wished she'd been alive in the '80s to experience Fleetwood Mac's comeback then. "I wish I'd been alive in the '90s!" I didn't chirp back, but should've.

Truthfully, going into the spontaneous evening, I was so potentially detached I thought I might leave after hearing "Trouble" (1981; a slice of pop perfection), or "Holiday Road" (1983; done with hilarious dog barks and ending with a simulated orgasm) or "Go Insane" (1984; performed true to the single's arrangement), but as they appeared, intertwined with Fleetwood Mac classics and a few songs I hadn't heard, I realized more and more I had no interest in going.

Buckingham even surprised me to death by performing "Slow Dancing" (1984), my #1 hoped-for, likely-wouldn't-be-sung tune of the night, and it was glorious. Buckingham fizz.

Throughout, his virtuosic guitar skills (as well as top-notch support from his rockin' band) dazzled, building to a crescendo by the end that left me clueless as to how, after all these years, those fingers are so nimble. It was as physically impressive a feat as watching an Olympian in action.

And believe me, all of this works even 30, 40 years after he was that big-haired, eyelinered, pouty snack who looked good in music videos while still delivering live.

It was an inspiring evening of music and a testament to getting on with the hand you've been dealt. Judging by how powerful he was up there as a solo act, the night's four-word review could've been, "Honestly, fuck Stevie Nicks."