One for the Ages: We Are All Norma Desmond

This is not an "age-shaming" post, but it is a post about how much our perceptions of age and aging have shifted in recent decades, as well as an indulgence in the mind-blowing reality of the passage of time.

This was written in 2018, and I have updated the ages for your reading pleasure.

The perception of a person's age has always been an important concept in entertainment. If you look young enough, you will be considered for roles far younger than your real age (hence the push to remove ages from IMDb). If you don't look old enough for a part as written ... well, maybe it'll be rewritten!

I'm writing this post not to say that people should try to look younger, or to pit women (or men) against each other in the aging process. We all age in different ways, often depending on factors outside our control — genetics, accidents, propensity to addiction.

Still, I am endlessly fascinated by how we used to see "old" and how we see it today. People still make fun of others for looking or being "old," and there are still glass ceilings that hinder older people from achieving some goals, but I also think our ideas of aging have — ironically — matured somewhat over the past 50 or so years, don't you?

Let's have some fun deciding, and let's obsess over other aspects of how time flies in Hollywood while we're at it:

I'VE WRITTEN A LETTER TO MOMMY

Susan Hayward was 50 when she played white-haired, wig-wearing Helen Lawson in Valley of the Dolls in 1967 … about the same age as Debra Messing (51 as of April 2020) today. 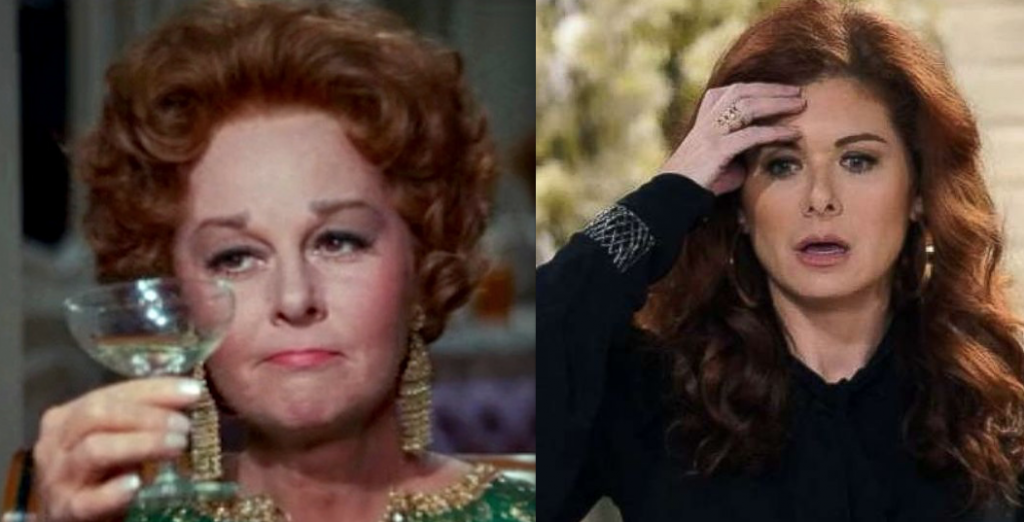 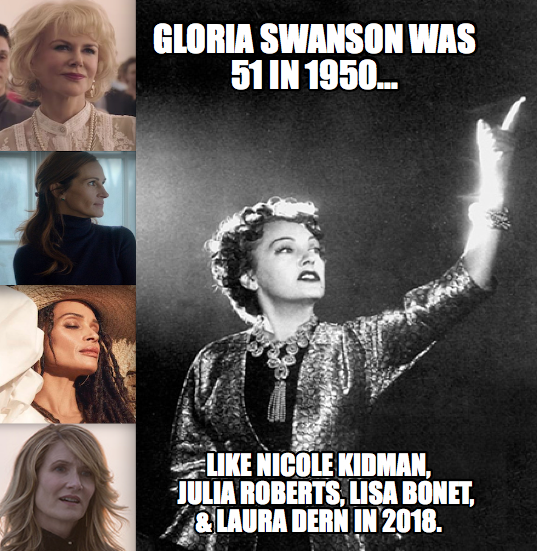 Gloria Swanson was just 50 when Sunset Boulevard was filmed. She looked lovely as Norma Desmond in the film, but was also presented as being in need of carbon-dating, someone whose career was impossibly long ago. This was helped along by the Silent Era vs. Sound Era timeline, but nonetheless, 50 is hardly antique today.

Madonna, 48 when her Confessions Tour ended in '06 (GIF via GIPHY)

For comparison's sake, recall that the Queen of Pop, Madonna — who had been mentioned as the possible lead in a film version of the musical Sunset Boulevard — is now more than a full decade older than Swanson was in the role, having turned 61.

Also, Glenn Close successfully reprised her performance as Norma Desmond in the musical version in 2017 on Broadway — at age 70. Close, now 73, will appear in the movie version.

It is arguable that as perfect as Sunset Boulevard is as a work of art created — and set — in 1950, any attempts to update it, as opposed to remaking it, would have to allow for how different the gap is between show biz in the '20s/1950 and the '80s/2018, and for how differently we view women at age 50 or 51. 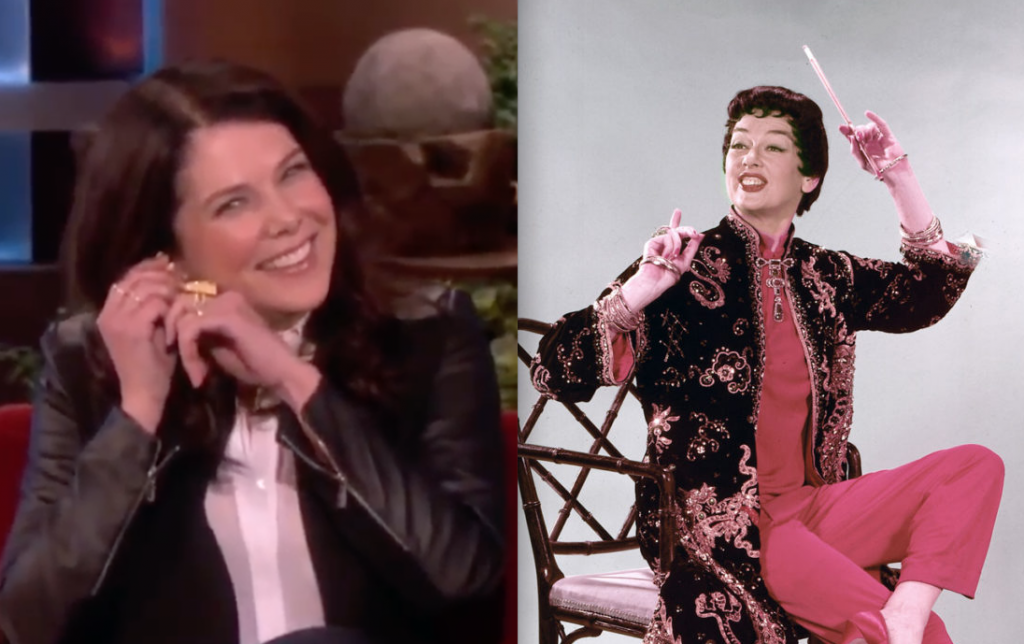 Her Mame was true! (Images via video still & Warner Bros.)

Another 51-year-old was the great Rosalind Russell at the time Auntie Mame came out in 1958. Maybe Lauren Graham or Mira Sorvino would consider a remake, since they’re 52 or 53 now.

Davis was shot in the most unflattering ways, and yet ... (GIF via Warner Bros.)

Bette Davis was 54 when What Ever Happened to Baby Jane? — another famous flick about aging glamourpusses — bowed on Halloween 1962. (Crawford — whose exact age can't be pinned down for certain — was older, but also in her mid-fifties.) 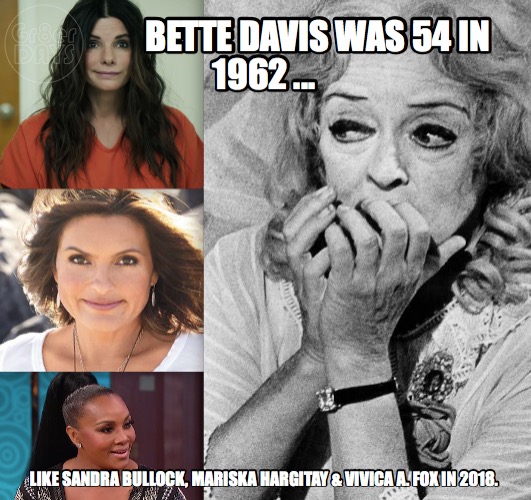 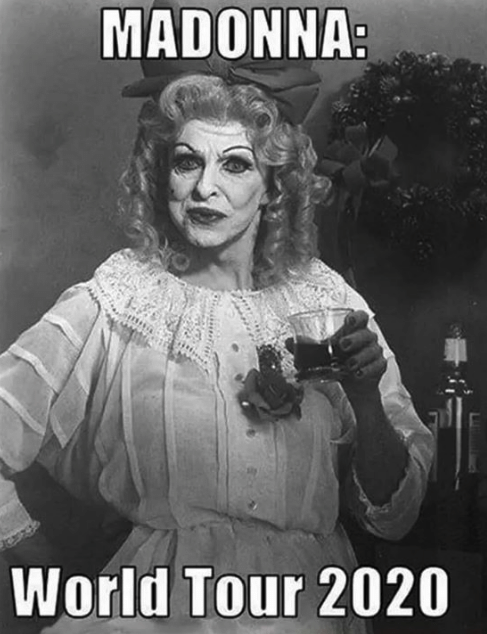 This grotesquely unimaginative meme is 'Baby Jane-themed, but actually features female impersonator Charles Pierce ... who was about 50 when this image was shot. Bette Davis was 54 in the movie. Madonna will be 62 in 2020. (Image via meme)

It's worth noting that the still-potent 'Baby Jane is often used to mock women whose detractors consider them to be has-beens, even though in What Ever Happened to Baby Jane?, both characters are decades away from their last work and Jane is not even remembered by the public at large, and the women currently mocked are usually relevant icons who've run afoul of this or that stan. 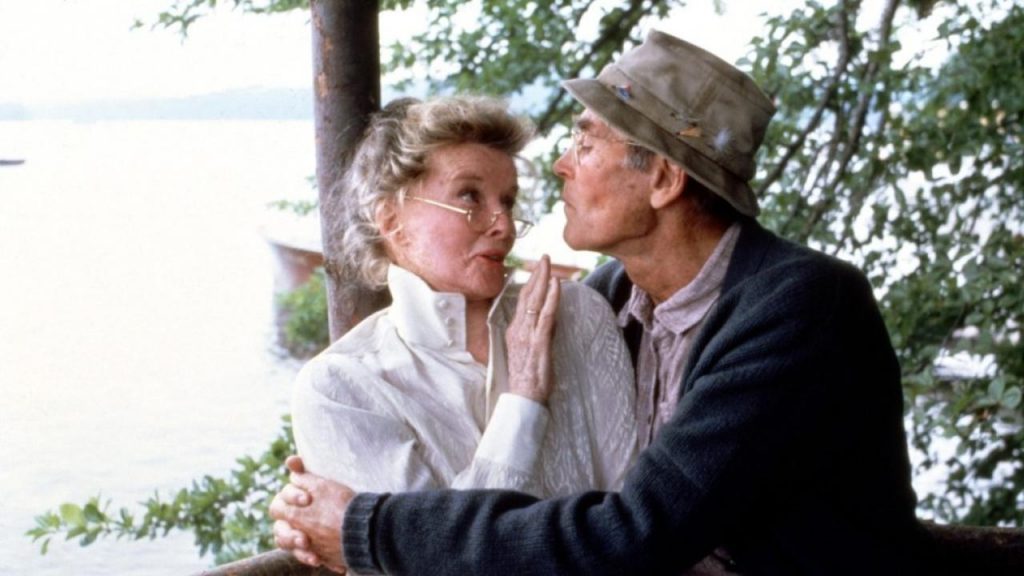 Mom and Poop (Image via Associated)

When On Golden Pond was released on February 12, 1982, Katharine Hepburn was 74 and Henry Fonda was 76, and they seemed the very definition of adorable old poops.

I've always been Fonda this pix. Taken by me, but of course.

When Harold & Maude came out in 1971, feisty Ruth Gordon was 75. Today’s casting? How about Stefanie Powers, Lauren Hutton, Blythe Danner or Catherine Deneuve, all just past 75? 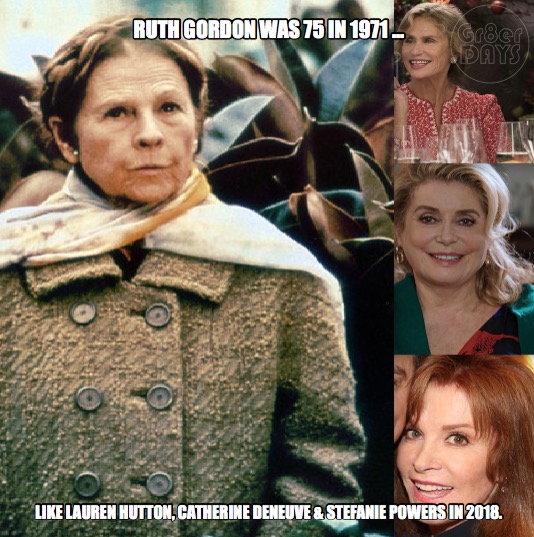 The Whales of August was released October 16, 1987. While Bette Davis, Ann Sothern and Lillian Gish were playing elderly and were, in fact, quite elderly, it's still somewhat bracing to realize that Davis was 79, older than Lily Tomlin is now. 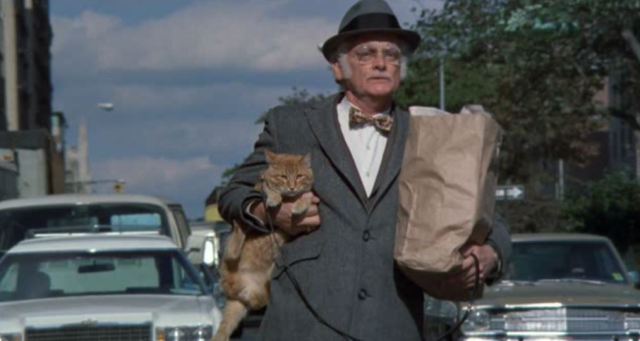 The Honeymooners was over. (IImage via video still)

Art Carney was 55 when he played an old retiree in Harry and Tonto (1974), and 58 when he played a way-past-his-prime private dick in The Late Show (1977). In the latter, he was so fragile he successfully feigned a massive heart attack. 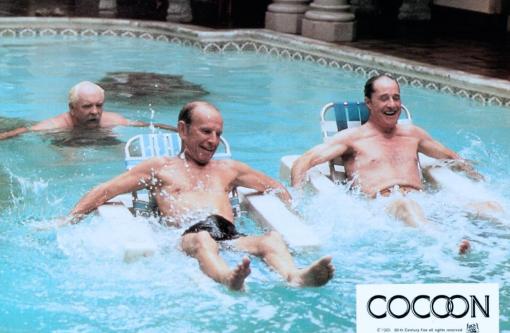 Only one of the old fogies from Cocoon (1985) is still living — Wilford Brimley. That’s because he was all of 49-50 years old when he made the movie, playing a man decades older! 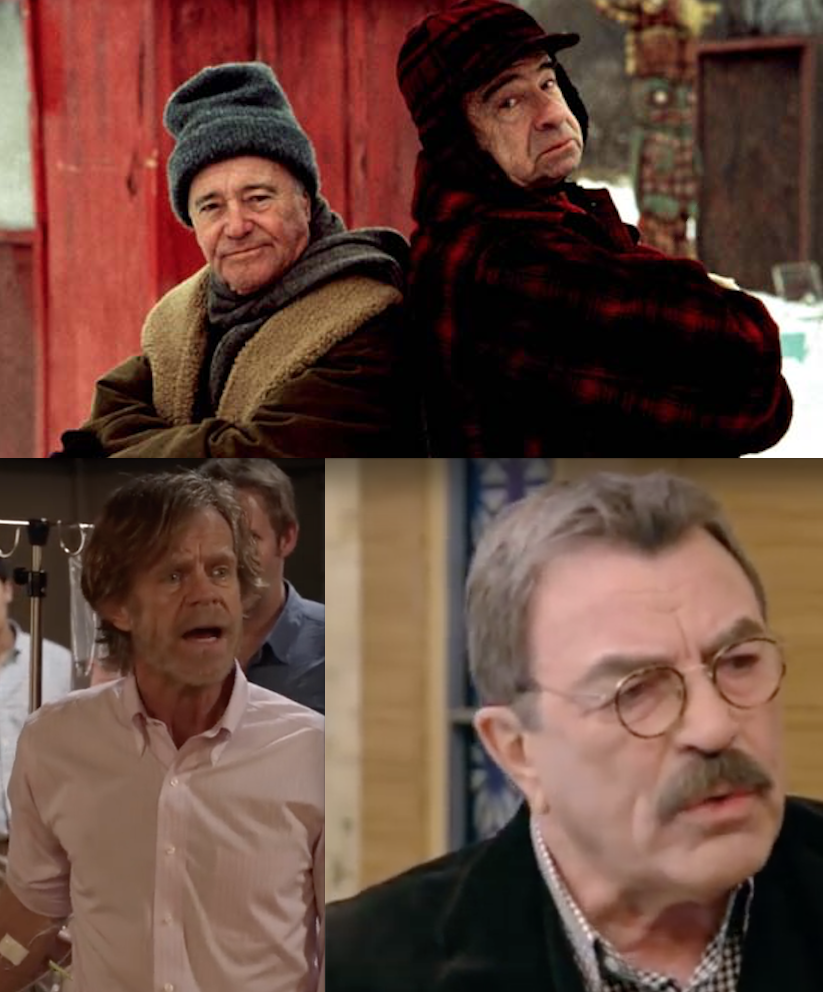 Jack Lemmon was 68 when Grumpy Old Men came out at the end of 1993, and Walter Matthau was 73. Wanna cast it today, 25 years later? How about William H. Macy and Tom Selleck? As with the rest of this post, it's not about physical age so much as how we perceive people — I don't believe William H. Macy reads the same as Jack Lemmon did in the '90s. 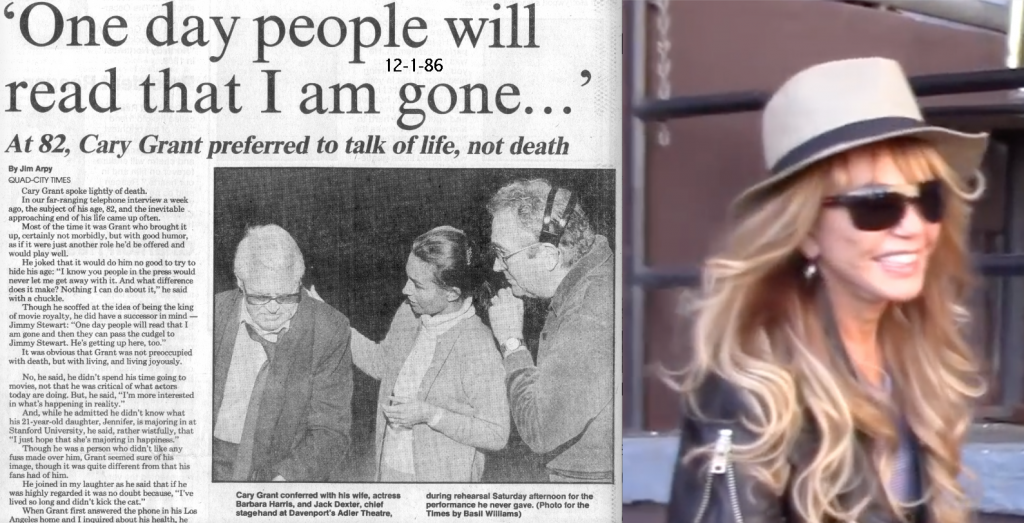 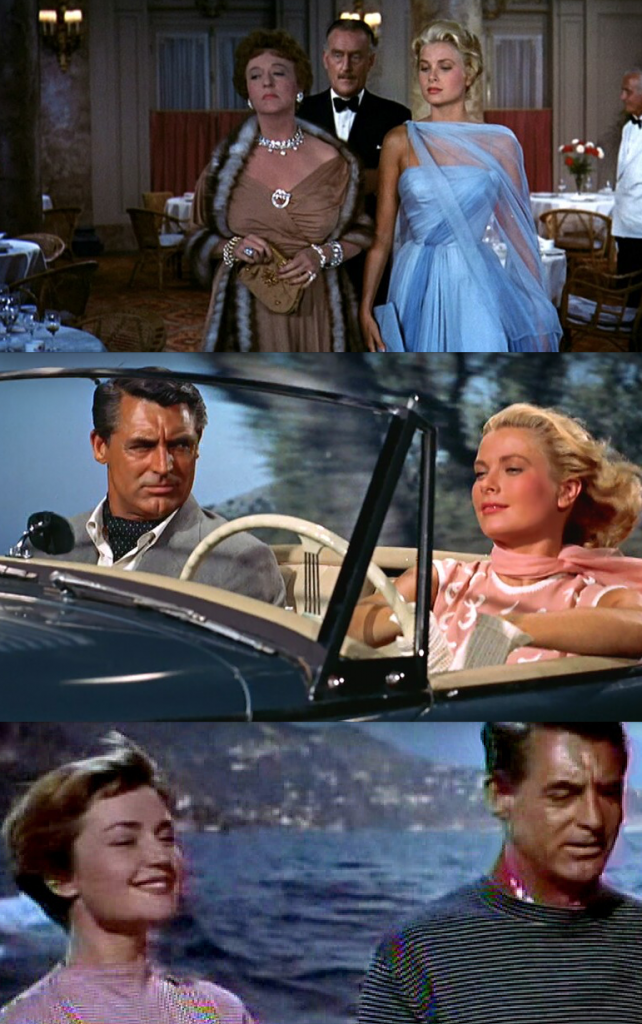 Jessie Royce Landis played Cary Grant’s mother in 1959’s North by Northwest. When it debuted, she was 62 and he was 55, a paltry seven-year spread. In 1955’s To Catch a Thief, she had played a rich widow who felt Grant should be making a play for her daughter, played by Grace Kelly, who was 25 while Grant was 51. In that same film, characters played by Kelly and actress Brigitte Auber sniped at each other jealously over Grant’s cat-burglar character, with Auber sneering about how comparatively old Kelly was and Kelly clapping back at Auber for being a mere teenager. At the time, Auber was actually 27, nearly two years older than Kelly. Kelly has been dead about 36 years, Grant has been dead about 32 years… Auber is very much alive, age 91 (another source claims she is 95). 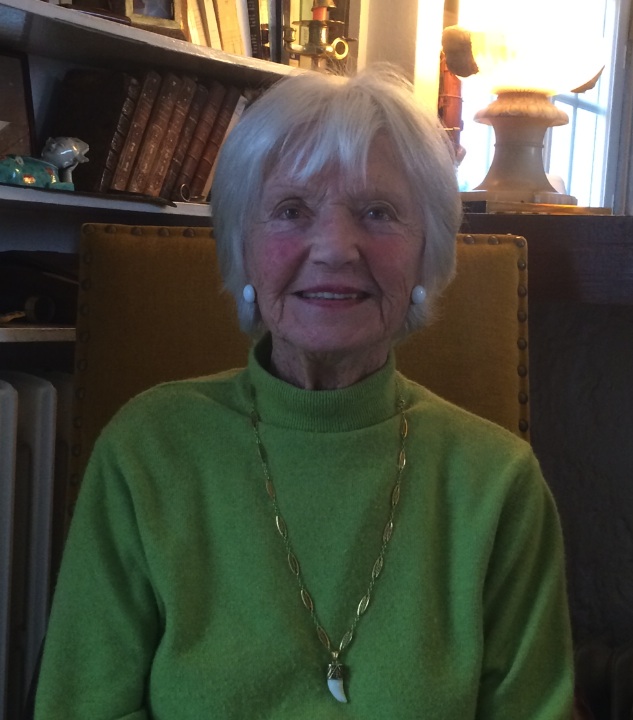 Back to men. Snowy-haired John Forsythe was about to turn 63 when Dynasty first aired, roughly the same age as Kevin Costner, Bruce Willis or Howie Mandel (all slightly older) today. 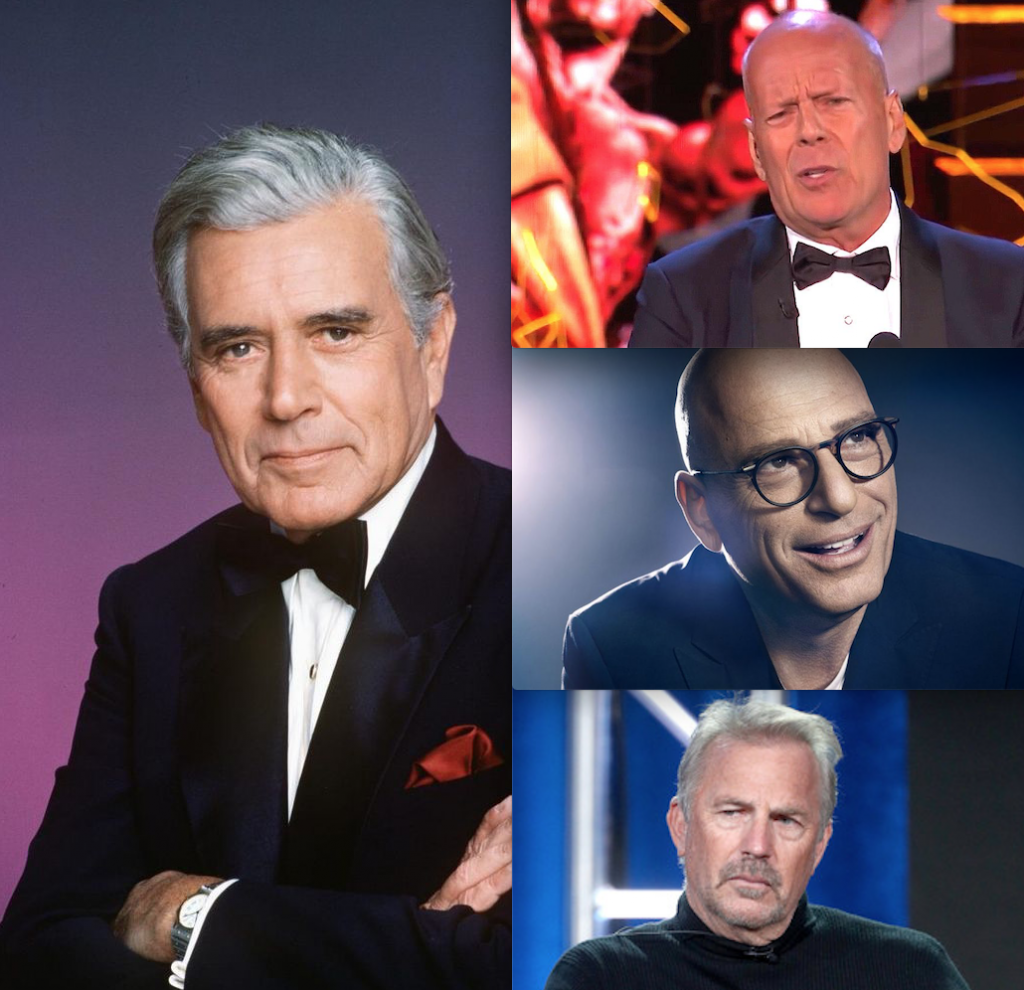 Pat Morita was turning 52 as The Karate Kid came out in 1984. Yes, salt-and-pepper-haired Mr. Miyagi was a bit younger than Patrick Dempsey, David Schwimmer, Kiefer Sutherland or Adam Sandler are today. 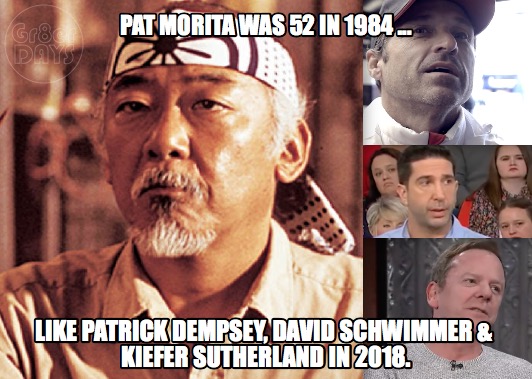 Granted, men's ages, in general, can be more deceiving, especially those who are prematurely silver-haired or prematurely bald. Hard to believe, but Capt. Merrill Stubing aka Gavin MacLeod was only 46 when The Love Boat first set sail. That puts him several years younger than Game of Thrones star Peter Dinklage, who is 50.

Carroll O’Connor was 46 when All in the Family debuted in 1971. Jim Parsons, who plays Sheldon on Big Bang Theory, is now 47. Or, if you wanted both a rough age match and wanted Archie to turn over in his grave, you could cast Dwayne “The Rock” Johnson, Idris Elba, John Cho or Wentworth Miller. 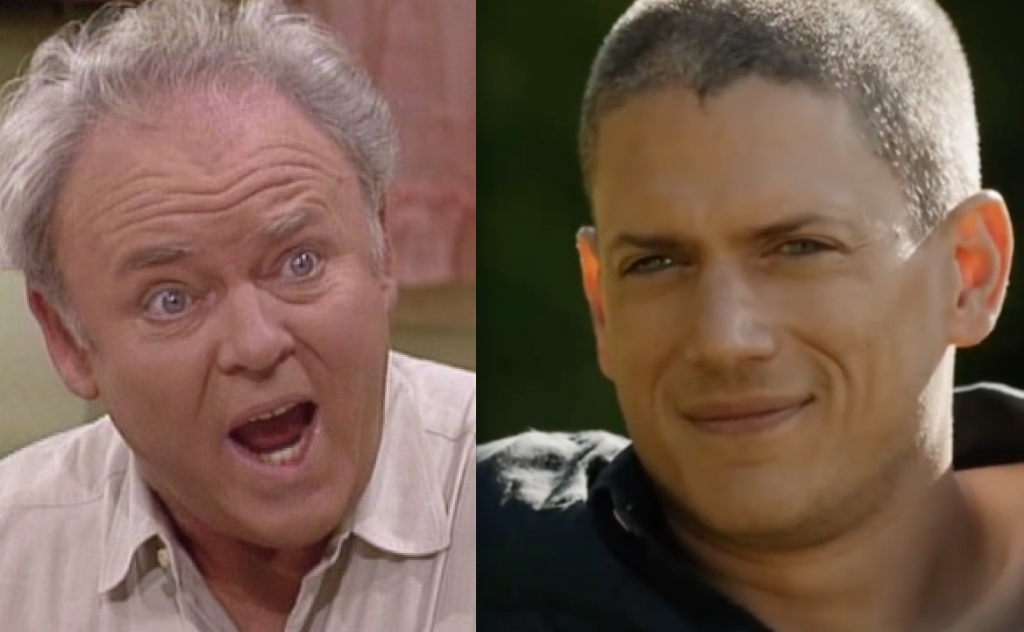 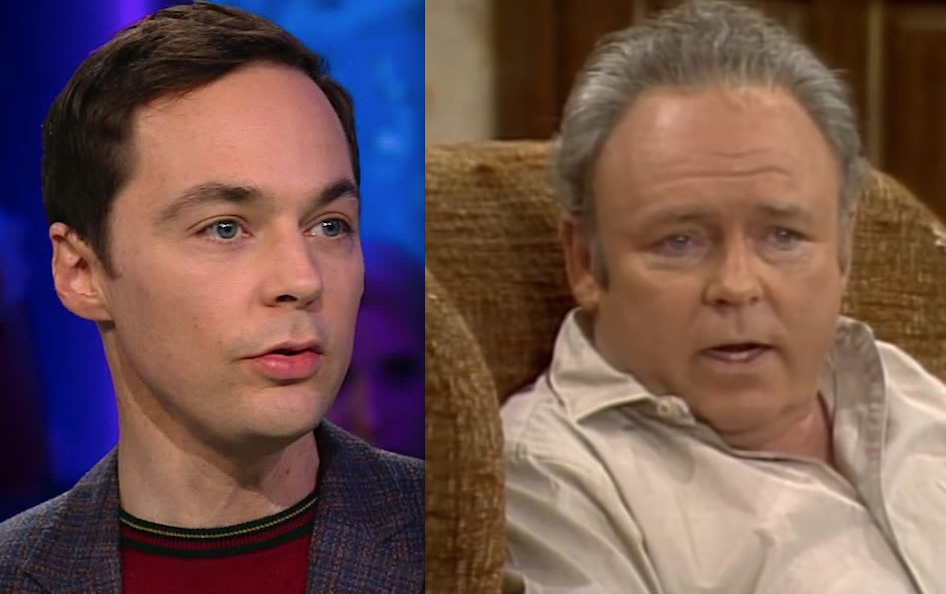 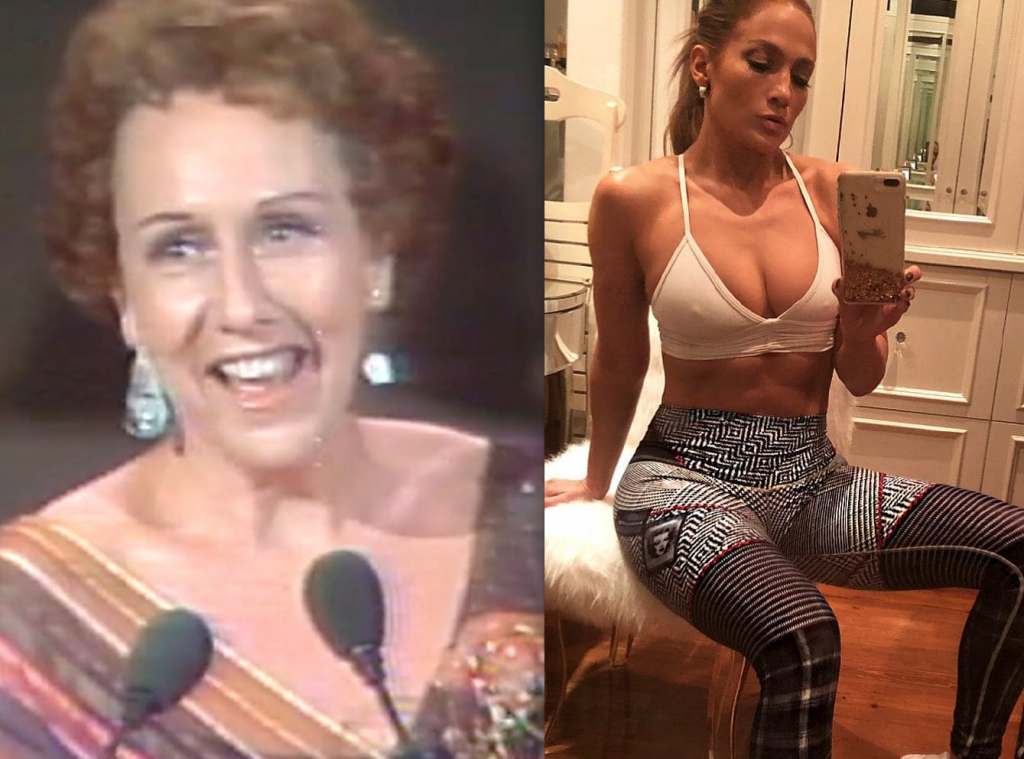 Jean Stapleton had just turned 48 when All in the Family debuted, two years younger than Shades of Blue’s Jennifer Lopez, 50. Again, if you wanted to keep the casting to 50-year-olds, try Taraji P. Henson, Melissa McCarthy, Heather Graham, Rachel Weisz or Jennifer Connelly, none of whom is easily imagined in a housecoat. Or consider this: Fellow TV mom Julie Bowen of Modern Family is now slightly older than Edith Bunker; shouldn’t be too shocking, considering Edith’s daughter Gloria was played by 24-year-old Sally Struthers, while Claire’s daughter Haley is played by 29-year-old Sarah Hyland. 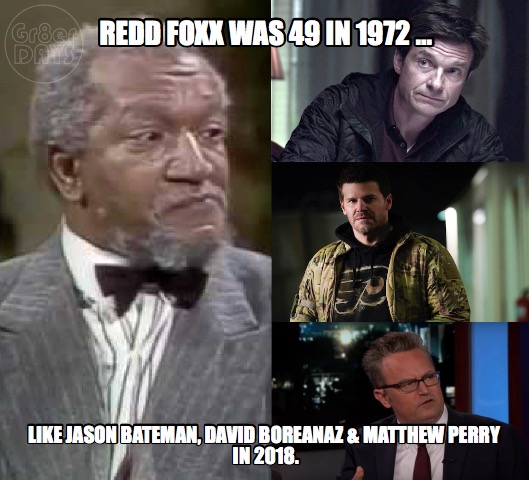 Redd Foxx was 49 years old when Sanford & Son debuted in 1972, around the same age as Jason Bateman, Matthew Perry or David Boreanaz today. 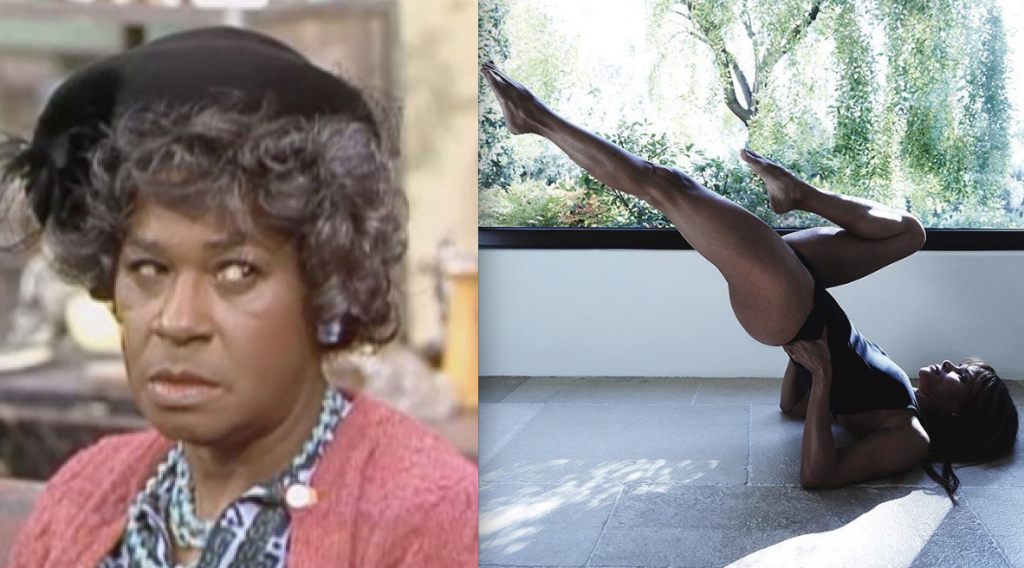 Somebody's asking for the purse! (Images via video still & Instagram)

Foxx’s character’s nemesis was played by LaWanda Page. She was 52 when Sanford & Son bowed, around the same age as Halle Berry, Salma Hayek, Cynthia Nixon, Julianna Margulies or Robin Wright today. No, really. 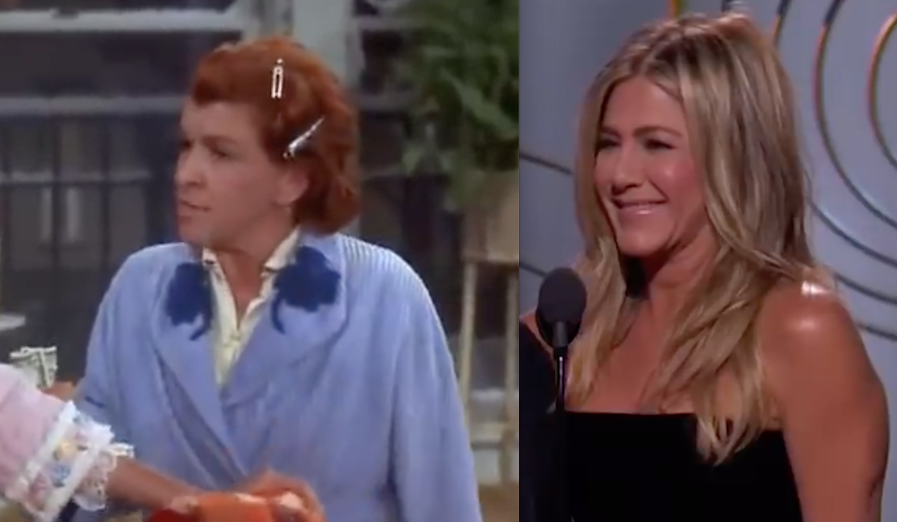 Nancy Walker was just 48 and a half years old when she created the role of Ida Morgenstern on Mary Tyler Moore in 1970. She was 49 at the time of her second appearance on the show, about Jennifer Aniston's age today. (Aniston's mom on Friends was played by Marlo Thomas, who was 58, back in 1996, when Aniston was 26.)

Norman Fell was 53 when he made his bow as Mr. Roper on Three’s Company on March 15, 1977 — you know, close to Robert Downey Jr. today. Audra Lindley, Mrs. Roper, was 58 — in the same neighborhood as Brenda Strong.

Weezy does it — wearing her age well (GIF via GIPHY)

Surprising ages can work in reverse, too. For example, the relatively ageless Isabel Sanford was already 54 when she debuted as Louise "Weezy" Jefferson on All in the Family in 1971.  (If Sanford were alive today, she'd be over 100 years old, closer to the age of Golden Age stars than to fellow '70s and '80s ladies, like Joan Collins, 86.)

Sherman was 45 when he perpetrated the best dance in sitcom history! (GIF via GIPHY)

More posts in this vein coming this week and next!